.
.
Well-constructed, professional and also fun
.
.
.
The Big Trail was not the springboard to megastardom that Wayne must have hoped. All through the 1930s he played in black & white second-feature movies for minor studios and did not emerge once more into the real limelight until John Ford needed a Ringo Kid for Claire Trevor to fall in love with in Stagecoach in 1939. After that, even then he returned to minor movies in the War years but his name was made and he never looked back.

.
.
But the 1930s Westerns are not to be discounted. Yes, they are corny and old-fashioned by modern standards but some of them are well-constructed, professional and also fun.
.
. 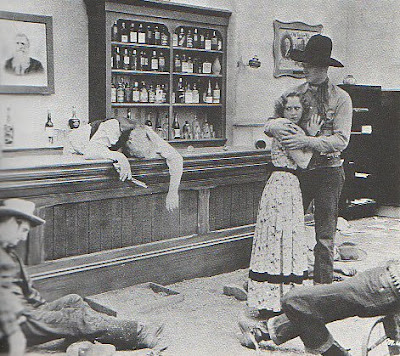 Between 1933 and 1935 the Lone Star production company issued sixteen Westerns released by Monogram. They were lively and well-made, if formulaic matinee fodder. The series of 50-minute pictures continued at the gallop with Randy Rides Alone in 1934, directed by Harry L Fraser and with the usual suspects: Archie did the photography, Yakima the stunts and Gabby played a lead role.

There’s a great Archie Stout opening shot looking up at Wayne on his white horse Duke as Wayne gazes down from the rocks at a wooden model of a saloon. The model allowed the shoestring-budget studio to show us a hacienda-style building and later blow it up.

This artistic first view of our hero (he is Randy Bowers and works undercover for the Adams Express Company so he always rides alone) is slightly spoiled by speeded-up film as he rides down to the model. They often did that to get through unnecessary parts quickly or to suggest haste. It always looked silly.

When Randy enters the saloon, he finds a pianola 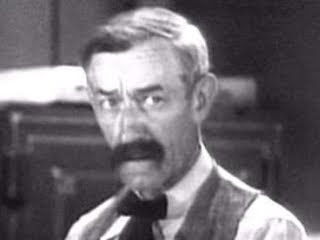 churning out a merry tune but everyone inside dead as mutton. As he wonders what on earth has happened, two sinister eyes shine in the eye-holes cut into a portrait. Someone is watching! Then a dumb sheriff arrives (Earl Dwire the Great, right, who looks excellent with a proper handlebar mustache and tweed suit) and without a shred of evidence he arrests Randy for the crime. Anyone could see that with a costume like that and a white horse as well, our hero must be innocent. But Sheriff Dwire throws him in jail.

It’s all due to the evil machinations of a clean-shaven Gabby Hayes, this time playing a man who cannot speak (Gabby?), known as Matt the Mute. Matt the Mute is really in disguise for he is none other than Marvin Black the badman and he can speak plenty, and boy, is he mean. Gabby’s chief henchman is Yakima Canutt. They have an excellent lair behind a waterfall. Probably they copied it from Chapter V of Riders of the Purple Sage. Johnny Guitar later used it again.

The plot then gets intricate (and actually quite clever). It’s wonderful really how well-constructed these 30s Westerns were (this one, like many of them, was written by Lindsley Parsons). They had to establish the characters (forget character development – no time for that – but they did establish them) and tell an often quite complicated story all in under an hour. This movie, like all of the series, rattles along at a cracking pace.

There’s a great line when Marvin is furious at his incompetent gang; “And you call yourselves bad men!”

In the end our hero is proved innocent (I’m giving nothing away here) and gets the saloon-owner’s daughter (Alberta Vaughn this time).

So Randy rides off into the sunset – but not alone!