I call that bold talk for a one-eyed fat man! 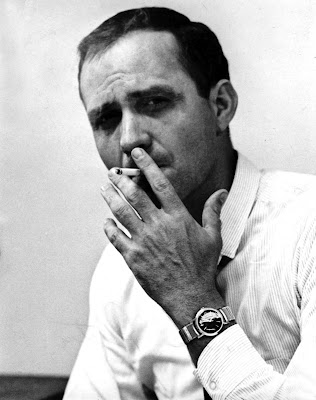 The novel True Grit (Simon & Schuster, 1968) by Charles McColl Portis (left), born December 28, 1933 in El Dorado, Arkansas, came out in 1968 and was very rapidly made into a film by Paramount. Not surprisingly, for it is an outstanding book, one of the best Western novels ever written.

I have just re-read it because the Coen brothers have said that they made their recent film (see our review here) from the novel rather than as a remake of the 1969 John Wayne movie (review here) and I wanted to prepare for seeing the new version, which is not yet out here in France, where I live. It will be showing at the Berlin Film Festival in February and then later on general release.

I was also curious to remind myself how close the screenplay of the 1969 film had been to the original novel, and I picked it up again too for the sheer pleasure of re-reading a marvelously enjoyable book after all these years.

Marguerite Roberts (1905 – 1989) adapted the novel in 1969 with consummate skill. (She also wrote, for Paramount, the script of Portis’s first book, Norwood, the following year and the film brought together Glenn Campbell and Kim Darby once more – though without Wayne). It is really quite remarkable how close the 1969 film True Grit is to the book, and how skillfully Ms Roberts took Mattie’s thoughts (for the book is told in the first person) and translated them into dialogue.

The plot, as you know, is a fairly straightforward Western chase/revenge one, set in Arkansas around 1878. It’s not that remarkable. What makes the book is firstly the sheer power of the characters, especially the two principals Mattie Ross and Reuben ‘Rooster’ Cogburn, and secondly the color and brio of the language. 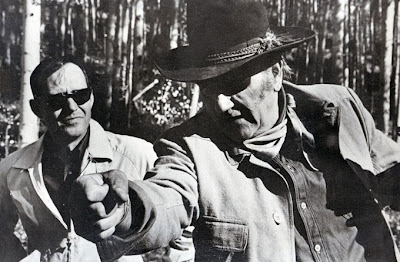 Unlike the ’69 film, the book is narrated by an elderly one-armed spinster, owner of a bank and pillar of the local Presbyterian church. She recounts her adventure as a thirteen-year-old girl. Her character shines through in every line. The conversation recounted is shot through with that Victorian blend of formality and common usage with just sings with authenticity. It is also often extremely funny in a dry way. Many of the great lines are taken directly into the screenplay of the ’69 film and we laugh at and love them. They have a Mark Twain or Bret Harte twang.

Mattie is doubtless a tight-fisted, mean old lady but what she demonstrates she has (in spades) is spirit. She has, in fact, true grit, as much as Rooster does. One line invented for the film, and well invented, is when Mattie, prevented from using the ferry, plunges into the freezing river on her pony to swim across and Rooster remarks to LaBoeuf, “By God, she reminds me of me!”

Rooster is of course a great literary creation, a Dickensian figure of great stature. I have heard it said that John Wayne was awarded his only Oscar for this film as a recognition of a great career rather than for a remarkable performance in this particular film. But in one of his best ever performances, Wayne (who yes, should have won an Academy Award ages before) was outstanding as Rooster and brought that wonderful character fully to life. In the book Rooster is in his early 40s and Wayne of course was over 60 but that’s fine: Wayne stamps the part with his own persona. It is a great comic performance.

The sergeant of Texas Rangers LaBoeuf (pronounced, Mattie tells us, “la beef”) is a slightly grayer character in the book and, it must be said, a weak link in the ’69 film. 1960s Westerns seemed almost under an obligation to have a popular singer in the cast. As actors, they usually made good singers. At least Campbell was from Arkansas. But other players are strongly delineated and memorable: the outlaw Lucky Ned Pepper and his gang (even the bit parts are strong), Lawyer Daggett (what a stroke of genius to cast diminutive John Fiedler in 1969), and best of all Colonel Stonehill, the miserable stock trader whom Mattie bests at his own game. Even characters who do not appear but are only mentioned, such as Marshal Columbus Potter, seem to us alive and real. In later life, Mattie meets Cole Younger and Frank James. She captures them brilliantly in five lines.

The ’69 film is so close to the book that there is little to criticize. Only the ending of the film departs significantly from the novel and, in the film, is certainly too sugary and out of character. The change of the fate of LaBoeuf is not easy to explain; what was gained by that in the film? I much prefer the ending of the book as far as Rooster is concerned and very much hope the Coen brothers have treated that as Portis did.

It’s not often that you get a five-star Western, one you adore, and find that the book it was based on is also a great novel. It happens but it’s rare. In the case of True Grit, the book and film are equals, at least judging by the 1969 movie. You have here a must-read and a must-see. And the great thing about them both is that you can re-read and re-see them and get almost as much entertainment out of them as you did the first time round.

You haven’t read it? Get on to amazon at once!

PrevPreviousHigh Noon in Lincoln: violence on the Western frontier by Robert M Utley
NextSeven Brides for Seven Brothers (MGM, 1954)Next

PrevPreviousHigh Noon in Lincoln: violence on the Western frontier by Robert M Utley
NextSeven Brides for Seven Brothers (MGM, 1954)Next
Jeff Arnold © 2022 – All rights reserved – Designed by BetterCallChris
Scroll Up