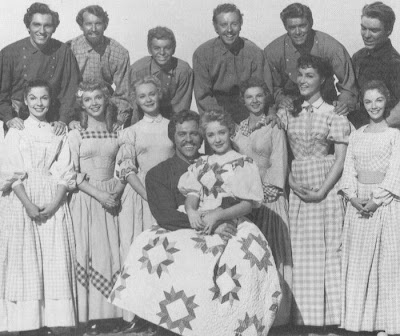 By some accounts this movie is a Western.

It said it was a Western in my TV guide.

By other accounts it is a not a Western but a cheesy musical about fourteen overly bucolic characters in 1850s Oregon, six of whom, males, take as a model the Rape of the Sabine women and kidnap six young townspeople, females; which females, kidnapped (though not raped), duly fall in love with their captors.

I desperately seek something positive to say about this dreadful film. I wanted, for example, at least to praise the scenery. Maybe we’d get some nice Oregon locations. Nope. 90% of it is set on studio sound stages so crudely painted that the set designer ought really to have been awarded the opposite of an Oscar then humanely put to sleep at the local veterinary surgeon’s office.

The avalanche was quite spectacular. Will that do? It was filmed at Corral Creek Canyon, at Sun Valley, Idaho.

Finally, though, I did come up with (almost literally) something positive to say about this musical: it is marginally better than The Sound of Music.

I hesitated over two words to sum up this film. The words were cheesy and dross.

I have opted for a compromise. It is cheesy dross.

At least Russell Simpson is in it. There is that.