.
.
A box-office break-even only, it has quality 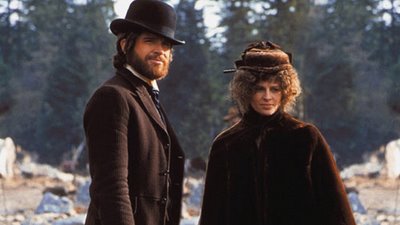 This film is directed by Robert Altman and it shows. It has the Altman trademark look. ‘Look’ was very important to Altman. In fact he said, “I don’t care very much about story in a film. I think of it as a painting.”

That’s a curious approach for a Western, perhaps, but in some ways this is not a Western at all. Set somewhere in the cold North-West about 1900 and filmed in Canada, the characters do not wear cowboy hats and gunbelts but suits and derbies and they speak English with European accents.

.
An authentic wooden zinc-mining town by production designer Leon Eriksen was built (largely by US draft dodgers) in British Columbia for the filming and its interiors are dark and crowded. Certainly later filmmakers such as Clint Eastwood in Unforgiven were influenced by these indoor shots. Then non-union member (and therefore un-nominated) cameraman Vilmos Zsigmond used flashing, a process of slightly over-exposing shot film, to give a look of almost Dutch-master lighting, with close ups of faces illuminated by oil lamps in dark wooden rooms. To be honest, it’s very fine.
.
Another Altmanism is the large amount of improvised dialogue and naturalistic background conversation, often with characters speaking over each other. You have to listen carefully but it works. 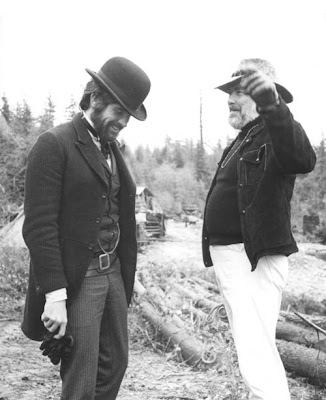 .
So the movie is an art film (a print resides at MOMA and in the Cinémathèque in Paris). But don’t let that put you off because it’s also a straight ‘hunt’ Western in which Warren Beatty, excellent with flashy gold tooth à la Calvera, as incompetent saloon and brothel owner McCabe, is pursued by three heavies out to kill him. And the three killers are among the best ever seen in a Western: a giant, a half-breed and a psychopathic kid.
.
Englishman Hugh Millais is chilling as Butler, their leader, in his goatskin coat and long gun, and Jace van der Veen and Manfred Schulz sinister as the other two. In fact Schulz was not a professional actor at all but a young man Altman found up in Canada. The way the boy shoots Keith Carradine (in his first film) off a bridge into the river (Carradine did his own stunt) is as icey as the water.
.
It’s a good book (Edmund Naughton), skilfully adapted by Altman and Brian McKay, with much license given to the actors to adapt and add dialogue to fit.
.
Beatty and Julie Christie were together at the time (although this was their first film together) and that perhaps gave power to their relationship, especially the love scenes, although Christie’s part is of a tough brothel madam who hardly exudes sweetness or tenderness and McCabe is often bewildered.
.
Altman didn’t want a musical score and such music as there is comes from the occasional fiddle player in the town and the overlaying of three songs by Leonard Cohen with curiously appropriate words considering they were added later. Cohen was generous with permission to use them, especially as when he finally saw the film he disliked it (though according to Altman he later came round).
.
One wonders if the dirt and mud and scruffiness of the costumes were influenced by spaghetti westerns. They might have been. They’re good anyway. There’s some very fake snow painted on at the end but it doesn’t matter.
.

The climax is the opposite of Gary Cooper meeting the three killers on the open street; McCabe realistically scuttles from hiding place to hiding place and manages more by luck than judgement to kill two of them by shooting them in the back.

Robert Altman was not a ‘Western’ director. He did some TV work (a Maverick episode, some Bonanza ones and so on) but as regards feature films he only made this and Buffalo Bill and the Indians (1976), which both had non-Western traits.

.
However that may be, a box office break-even only, McCabe & Mrs. Miller later and deservedly became a must-see.
.
.
PrevPreviousSeven Brides for Seven Brothers (MGM, 1954)
NextValdez Is Coming (United Artists, 1970)Next