The Westerns of Robert Taylor

Robert Taylor did it right

Spangler Arlington Brugh, renamed Robert Taylor by MGM on his signing for them in 1934, was one of the most famous movie stars of his time. He is probably best known as a romantic lead, or striding through Hollywood’s idea of the Middle Ages with a sword, but he was brought up on the plains of Nebraska, rode well and always wanted to be in Westerns. And he was excellent with a Stetson and six-gun, projecting that right blend of toughness and decency – with a hint of a murky past –  to convince as a hero of the West. So he is more than worthy of our attention, true Westernistas that we are to a (I almost said man) person.
.
. 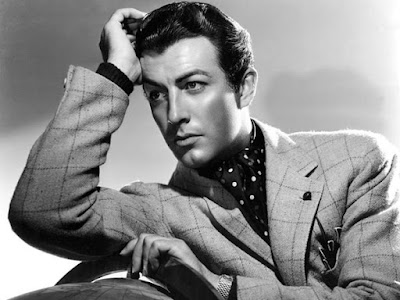 Sultry
.
Arly, as he was often known, made fourteen big-screen Westerns in his relatively short career (a chain smoker, he died of lung cancer in 1969 aged only 57), and he hosted the long-running TV show Death Valley Days from 1966 to 1969.
Many people think of Metro’s Billy the Kid in 1941 as Taylor’s first outing in the genre. But in fact a movie of three years earlier has a better claim to that honor, Stand Up and Fight, in which he was second billed to that old ham Wallace Beery. Though it starts in a rather unWestern way, with posh people at a foxhunt in Maryland in 1844, it soon develops into a classic Western with much ridin’ and shootin’, and a plot about a stage line’s rivalry with a new railroad. It’s actually an enjoyable picture. 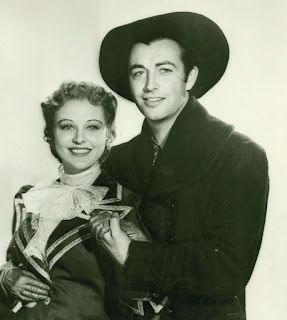 Young Bob Taylor in his first Western
.
But Billy the Kid was Taylor’s first Western lead, and was one of his best known oaters. It was rather darker and more somber than many of Taylor’s previous pictures had been and marked a departure for him, and indeed the majority of his Westerns had him as a ‘man with a past’, not always on the right side of the law, with hints of angst and pain. He often wore black. Billy was not the greatest picture, being a weakish color remake of the King Vidor-directed Billy the Kid of 1930 with Johnny Mack Brown as Billy and Wallace Beery as Pat Garrett. The Taylor version was wildly inaccurate historically (most Billy movies were, but this one is especially so), there’s no Pat Garrett and the nearest to a Garrett figure was a miscast Brian Donlevy. And Taylor was already a bit anno domini to be playing the homicidal teenager – but then most Billy actors were. Still, it was a critical (though not box-office) hit and established Taylor as a Western star.
.
. 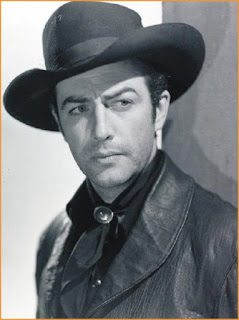 At 30 he was slightly long in the tooth to be Billy the Kid but never mind
.
There followed a pause. Through the 40s Taylor busied himself with noirs and war films, and served as a flying instructor. But in 1950 he returned to the saddle with two outstanding Westerns. First came Ambush, released in January, a gripping Apache story written by the great Luke Short, co-starring John Hodiak and Arlene Dahl, and with a splendid John McIntire. Then, in September that year, Devil’s Doorway came out, directed by Anthony Mann. In Devil’s Doorway Taylor played a Shoshone war veteran returning after the Civil War with the Medal of Honor, only to find himself ousted from his land because he is not ‘American’. Mann’s story was a powerful statement about racism and Taylor was superb in it.
.
. 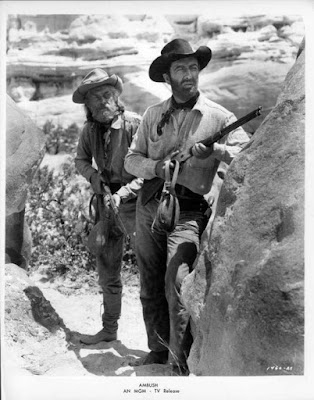 With an excellent John McIntire in Ambush
.
The following year he appeared in another top-class Western, an underrated but great movie, Westward the Women, directed by William A Wellman. It was a kind of hymn to the courage and fortitude of the pioneer woman. Taylor plays a misogynistic wagon train boss who comes to admire and respect the party of mail-order brides he is taking out to California. It’s a great performance in a fine film.
.
. 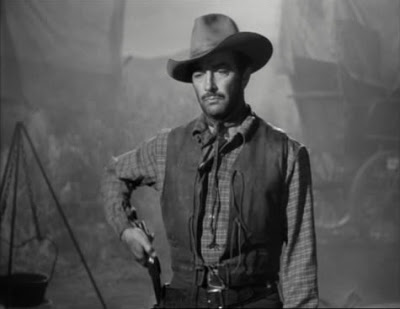 Westward the Women was a fine film and Taylor was excellent in it
.
A later Western (well, semi-Western is the best we can say), also dedicated to the women pioneers, Many Rivers to Cross, (1955) was a disappointment after the Wellman picture, being a not-very-funny comedy similar in tone to MGM’s successful but dreadful Seven brides for Seven Brothers of the year before, but the humor falls flat. Neither Seven Brides nor Many Rivers was a Western in any true
sense; they just used ‘the West’ (in the case of Many Rivers, 1798 Kentucky) as a backdrop for foolishness.
Between the ‘women’ Westerns came the much more traditional Ride, Vaquero! in 1953. This was rather a torrid affair, with Ava Gardner loved by Howard Keel (they are Texas ranchers) and then Taylor appearing, rather overly made up and in a dudish black costume, to upset the equilibrium. It’s classily written and Taylor has some great lines. He comes across as a sort of Lassiter figure from Zane Grey.
.
. 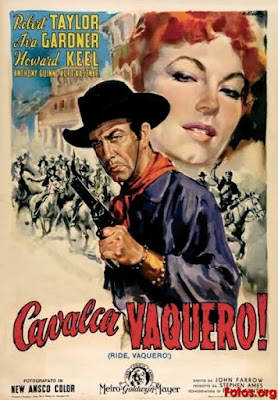 Torrid
.
In 1956 came The Last Hunt. Here he co-starred with posh British actor Stewart Granger who was surprisingly good in Westerns. Taylor plays a paranoid buffalo hunter and it was his most uncompromising role so far. It’s really an excellent picture and Taylor appeared to be emphasizing his badman Western credentials even more.
Two Westerns followed in 1958, Taylor’s last as MGM contract player, Saddle the Wind, released in March and The Law and Jake Wade in September. In the first Taylor is a tough rancher, again a ‘man with a past’ (he was formerly a gunslinger) and the story is one of sibling rivalry, with John Cassavetes overacting as Taylor’s younger and angrier brother. In the second, a visually fine picture with Robert Surtees cinematography of Death Valley locations, Taylor plays against Richard Widmark, very strong as the bad guy, in a John Sturges-directed tale of stolen gold. Both these pictures were good, solid Westerns, quite edgy, and Taylor was more than competent in them.
But his contract with MGM was not renewed. Now 48, he was showing his age. His face was craggy and lined. But that suited certain Western roles and he did not abandon the genre. He formed his own company, Robert Taylor Productions, and its first Western was for Paramount in 1959, The Hangman. In it Taylor plays a tough bounty hunter who has earned his nickname for always delivering his quarry to the executioner and his rope. The project had a star line-up, being once again (like Ambush) written by Luke Short, directed by Michael Curtiz of Dodge City fame and photographed by Loyal Griggs, who had won an Oscar for Shane.
.
. 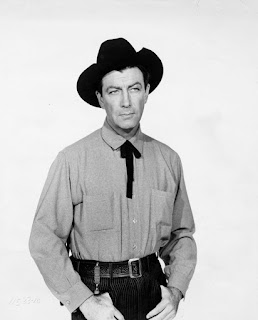 Bounty hunter in The Hangman
.
Taylor devoted the rest of the 50s and the early 60s to his TV show The Detectives, but in 1963, now 52, he climbed back in the saddle with Cattle King. Hollywood liked cattle barons (or baronesses) and in this one Taylor is a rich rancher, a little like the character he played in Saddle the Wind. But unlike most cattle barons in movies, Taylor’s is a good guy, with more than a little sympathy for the sturdy homesteaders. The villain of the piece is a splendidly malevolent Robert Middleton. Though a 60s Western, the picture has very much the air of a 50s one, and is played ‘straight’ with no frills, and no hint of revisionism.
In 1966 Taylor, rather as Rory Calhoun had done with Way of the Gaucho in ’52, did a semi-Western set in Argentina, though Taylor’s was shot in Spain, Savage Pampas. The movie has poor English dubbing of the international cast and, directed by Hugo Fregonese, is too slow and plodding. It was not a noble addition to Robert Taylor’s Western career.
His last big-screen Western came out in 1967, Return of the Gunfighter. It was a return in another sense, too, because he made it back at MGM. In fact this is rather a good, gritty 60s Western, directed by James Neilson and with a story by Burt Kennedy. It also benefits from smoothie Lyle Bettger as the bad guy. Really, it could just as well have starred Audie Murphy, say, or, a decade before, Randolph Scott; it’s a classic mid-budget Western. And Taylor looks frankly old and ill. But it has its points and it was by no means his worst.
The same year as Return of the Gunfighter, Robert Taylor appeared in a small part as a ‘guest star’ in two episodes of the ABC TV Western show Hondo which were then combined to make a TV movie, Hondo and the Apaches. But of course his biggest contribution to the TV Western was as host of the long-running Death Valley Days, when his friend Ronald Reagan gave it up to run for governor (Rosemary DeCamp filled in for short time). Like Reagan, Taylor also appeared in a few of the shows, playing the characters Porter Stockman, Horace King and Shanghai Kelly. When Taylor became gravely ill he was succeeded as host by Dale Robertson.
.
. 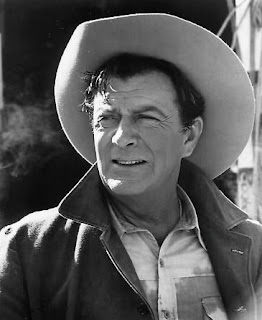 Taylor in Death Valley Days, almost unrecognizable as the youth in Stand Up and Fight
.
The majority of Robert Taylor Westerns are good, some very good, and he had a certain authority in them. Probably the very best were the trio he made in 1950 and ‘51 but with the possible exception of the gaucho one you can watch any Bob Taylor oater and not be disappointed. He was one of the better Western actors.
Thanks, Bob.