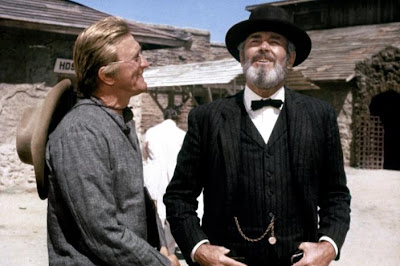 Sadly, Henry Fonda’s last two Westerns were pretty awful and that was very unfortunate after such a fine career. 1970 was the year of some good pictures in the genre: The Ballad of Cable Hogue and Monte Walsh, to name a couple. There Was A Crooked Man, however, wasn’t one of them.
.
If you are thinking that there wasn’t the film maker born who could make Fonda bad in a Western, well, producer/director Joseph L Mankiewicz is your man. He made every effort. He certainly also employed some dire writers, David Newman and Robert Benson. He couldn’t have made a film this bad all alone. They went on to the even dizzier heights of Sheena, Queen of the Jungle and Kramer vs Kramer. But a lot of the ‘credit’ for this dreary tale must go to Mr. Mankiewicz.
.
The acting doesn’t help. There are some good names in the line-up but they all give of their worst, starting with Kirk Douglas, as chief jailbird, in eyeglasses and bright orange hair. Poor Fonda, in a beard, does his best but with this plot and these lines and that direction even he stood no chance. John Randolph and Hume Cronyn are an elderly male couple. Warren Oates is a dumb killer. Michael Blodgett is the pretty boy with virtually no lines. Burgess Meredith is the old lag ‘Missouri Kid’. None of them is any good. There are a few women but only for titillation purposes, to be shown without their clothes in various scenes. As most of the story takes part in a men’s prison in the middle of the desert, these scenes were bound to be a bit contrived.
.

The music (Charles Strouse) is tiresome, an insistent reworking of a grim title song warbled by Trini Lopez. The photography (Harry Stradling Jr) is unremarkable. In fact it manages to make the Joshua Tree and La Joya, NM dull – quite an achievement.

The film went for the ‘bawdy-comic’ approach. It flopped dismally. The ending was supposed to be an O Henry-type twist. It’s really bad. The prison brawl episodes are among the least convincing scenes in the movie, and that is saying a lot.

One has to search to find something good to say about this Western. The set was impressive, a huge 1880s territorial prison built specially and then demolished afterwards to leave the desert location unspoiled. Truckloads of rocks were brought in for the prisoners to break and then trucked out again. Will that do?

It got one or two surprisingly good reviews but the Christmas public was more discerning and stayed away in herds. Brian Garfield, as so often, got it right in his Western Films: A Complete Guide: “It’s long, slow, overacted and monumentally distasteful – an idea gone awry. Neither funny nor illuminating, it is only pretentious trash. It commits the ultimate sin: it is boring.”

PrevPreviousFirecreek (Warner Bros, 1968)
NextMy Name is Nobody (Titanus, 1973)Next
Jeff Arnold © 2022 – All rights reserved – Designed by BetterCallChris
Scroll Up