His name was Somebody 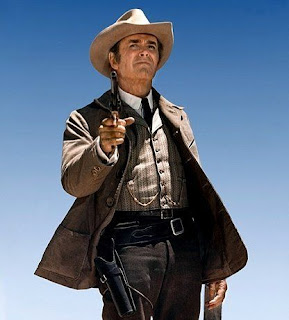 But it was a tragedy that this should be so because he finished with the worst Western he had ever made, My Name is Nobody. It was by a long shot worse even than There Was a Crooked Man.

It was directed by Tonino Valerii but has Sergio Leone stamped all over it, from the scenes that go on far too long, way after we have got the point, to the interminable close-ups of eyes and the use of Ennio Morricone’s irritating music. Why people think Morricone was good I will never know. The music is trite and wanders between the annoying woo-woo vocals and ‘comic’, chirpy interludes. In this film there are a hundred and fifty riders (known as The Wild Bunch) and whenever they appear Morricone puts his wretched stamp on the Valkyries music. As always, this ‘amusing’ idea is milked till we are heartily sick of it.
.
.

The main star with Fonda of this Italian-French-German co-production is a Venetian named Mario Girotti (who took the name Terence Hill). Poor Fonda does occasionally in this movie look bewildered, as if wondering what on earth he is doing there. Hill was enormously popular in Italy and perhaps his kind of humor goes down well there. There is a lot of slapstick and speeded-up film. He makes faces. He is a buffoon, in fact, which is, of course an ancient Italian tradition but entirely unsuited for a Western ‘hero’. 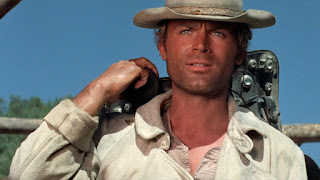 .
There is naturally the old ‘nobody’ joke – which is at least as old as Odysseus – as in “Nobody was faster on the draw”. If you want to see that joke used well, watch Dead Man. Here, it is, like everything else, done to death.

There is lavatorial ‘humor’ and a silly (and far too long) scene in a house of mirrors, a cheap reworking of the moment in The Lady from Shanghai.

There are really only two good things about this film: some of the photography is quite good, for example a bit where the riders gallop through the White Sands in New Mexico; and, of course, Fonda, who, despite the awful lines he has to deliver, shines through in his old age as the famous gunfighter at the end of his career. If it hadn’t been for these two points, the film would be completely unwatchable.