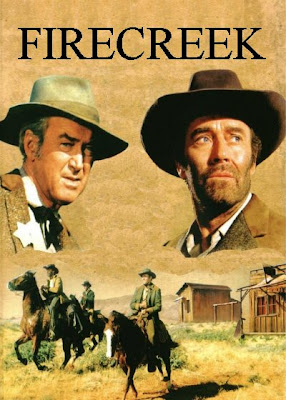 Although the direction and editing of Firecreek could have been tighter and the pace of this movie is slow, the writing, acting and photography are so good that the movie shines.
.
Vincent McEveety was primarily a director of TV episodes (Columbo, Star Trek, The Man from UNCLE, you name it) and didn’t really do a great job with this film (though he was better at big-screen Westerns than his brother Bernard). But his actors, notably the stars James Stewart and Henry Fonda but also the supporting cast, were such professionals that they overcame this.
.
The story and dialogue (Calvin Clements) are very good. Fonda is the boss of a band of white-trash professional guns, on the run from a range war killing up north, who arrive in a crumbling town of losers, Firecreek, which has a farmer who does part time sheriffing for two dollars a week (Stewart). The bad guys tree the town and Stewart, though he tries to stand up to them, is outclassed and knows it.
.
Fonda is outstanding as the leader with qualities far above the gang and Stewart is also fine as the man who comes round to realizing that he’s going to have to make a stand. It was Fonda and Stewart’s first full length film together and by that time the friends had both been in Hollywood for 32 years (they would get back together in 1970 in The Cheyenne Social Club). And it was the first time that Fonda played an out-and-out badman. (He sure outdid himself later in the year when Once Upon a Time in the West came out).
.
There are (distant) echoes of High Noon as the townsfolk cower and leave it up to the sheriff. There’s a bit like the scene in The Deadly Companions where the villains come in to drink in the store which is acting as improvised church (Ed Begley is excellent as the preacher). The shoot-out, with the professional gunmen searching for the hero in the streets of a wooden town, is in a way the prototype of that in the later Pale Rider: but here Stewart is no super-human Clint-style gunfighter. Yet he gets them, amateurishly, more by luck than judgment, rather as Warren Beatty does in McCabe & Mrs Miller.
.
The women in the town are as bitter and hopeless as the men, Inger Stevens and Louise Latham being particularly good, as is the young tart who throws herself at the men, Barbara Luna. The bad guys under Fonda, led by Jack Elam, are satisfactorily nasty. Robert Porter is moving as the simpleton stable boy. All the acting is good.
.
William Clothier photographed it, well, as ever, and there is some nice Oak Creek Canyon and Sedona scenery (although a lot is done on the studio set). The Alfred Newman score is effective.
.
The ending in which the irresistible force of Fonda meets the immovable object of Stewart, is superb.

The Western is small and somber. It was far from a box office smash. Perhaps late sixties audiences were tired of dark, grim Westerns or, more likely, they expected more fun from Fonda and Stewart in harness. Fonda used to shake his head when reminded of the film. “Any man who tries to kill Jim Stewart,” he said, “has to be marked as a man who’s plain rotten.” But it’s a must, pards.