.
.
A decent enough low-budget Western
.
.
Sam Peckinpah’s first feature film was on a small scale and is reminiscent of The Westerner on TV. Brian Keith had got the lead in a big studio Western and persuaded the Paramount powers that be to let Sam direct. It was not a happy experience because Maureen O’Hara (who also produced) and especially her brother Charles B Fitzsimons were being prima donna-ish in the extreme, petulantly refusing to let Peckinpah alter the script by a comma. Sam vowed never to do another picture unless he had written it or had the power to rewrite.
.
. 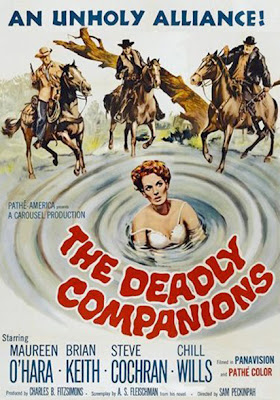 Keith, who was rather inclined to take any script that came along and was therefore in a few clunkers, could also be very good occasionally (he was like Robert Mitchum in that way) and he is strong here as a somber, taciturn, driven Dave Blassingame-esque man on a revenge mission but in fact decent deep down. Maureen O’Hara, however, though beautiful, is no good in this. She was in nine Westerns, from Buffalo Bill in 1944 (in which she wasn’t too bad) to Big Jake in 1971 via her best, Rio Grande in 1950. She co-starred with Keith in The Rare Breed but that was absolutely dire. In Deadly Companions she is far too refined to be a despised saloon gal and completely unconvincing. She warbles the song at the beginning and end in her second-class operetta voice but really it’s a pity they couldn’t have got someone good.
.
. 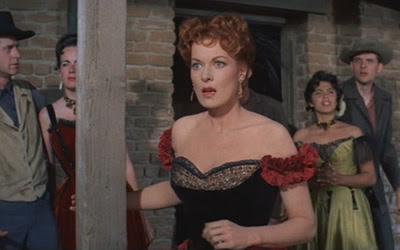 Early in the titles we get “Filmed in its entirety within the State of Arizona”, which is presumably why the movie was entitled New Mexico in France.
.
. 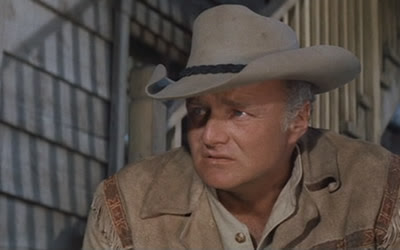 There’s OK photography by William H Clothier and slightly odd, incongruous music by Marlin Skiles. Both suffer from the very low-quality of the print on my lousy Bach Films DVD, which also has unclear dialogue and appallingly bad subtitling. People who have seen the movie in a good widescreen print say it’s visually superb.
There’s excellent support from Chill Wills as the Peckinpah-ish unwashed horrible old man figure, Turkey; this one is half mad. Strother Martin is, as always fun, stealing the limelight, this time as a parson – Peckinpah developed quite a line in mad or corrupt clergymen. Steve Cochran (in his mid-40s) is, however, inauthentic as the kid gambler-gunslinger Billy and I wish he’d button his shirt up. Ugh. 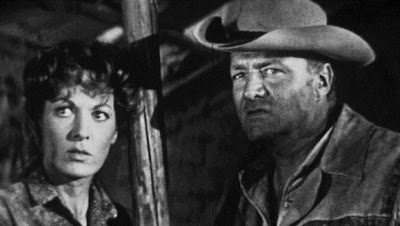 .
Keith and O’Hara end up carrying an empty wooden box (you can tell it’s light) slowly (very slowly) across the Arizona desert and escaping from Apaches, only to have to fight it out with the bad white men at the end, although with hindsight you feel it needed to end with a Sam-type bloodbath. It fizzles.
It’s a decent enough low-budget Western, worth a watch, and it is historically interesting as Peckinpah’s first, although no one pretends that it’s up there with the greats. It sank from view almost immediately on release but I quite like it in its minor way. There’s the odd hint of Peckinpah-to-come, like the hypocritical townsfolk or the children fighting with sticks in the street.
.
PrevPreviousSam Peckinpah
NextPeckinpah: between Major Dundee and The Wild BunchNext

PrevPreviousSam Peckinpah
NextPeckinpah: between Major Dundee and The Wild BunchNext
Jeff Arnold © 2023 – All rights reserved – Designed by BetterCallChris
Scroll Up