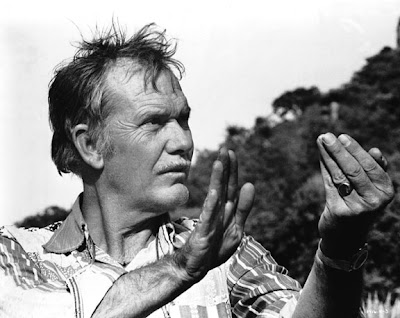 .
Most Western fans would agree that David Samuel Peckinpah (1925 – 1984) was one of the most influential figures in the filming of the West. It’s time for a Peckinpah retrospective. A Samorama.
Pretty well everyone has had something to say on Sam. He has been the subject of many documentaries including:

*   Sam Peckinpah’s West: Legacy of a Hollywood Renegade (FBN, 1994), included as a bonus on my Wild Bunch DVD;

*   The Wild Bunch: an Album in Montage (Tyrus Entertainment, 1996). This was nominated for an Academy Award as Best Documentary Short Subject. It’s quirky (it really is a montage of old clips) but actually very good;

*   Then in 2005 German film maker Mike Siegel produced and directed Passion & Poetry – The Ballad of Sam Peckinpah, a 270-minute 2-DVD set which includes rare Peckinpah interviews. Phew. Not sure I could watch all that.

There are endless books on him too. As a small sample:

*   Mesce, Bill, Jr. (2001). Peckinpah’s Women: A Reappraisal of the Portrayal of Women in the Period Westerns of Sam Peckinpah. Scarecrow Press.

Not to mention the imaginatively titled

If They Move…Kill ‘Em by David Weddle, Atlantic Monthly Press (1994).

You get the idea: wagonloads of books.
So, why shouldn’t Jeff Arnold have his 10¢ worth too? I mean we are Western buffs here, right? Sure we are. Yer dern tootin’.
.
. 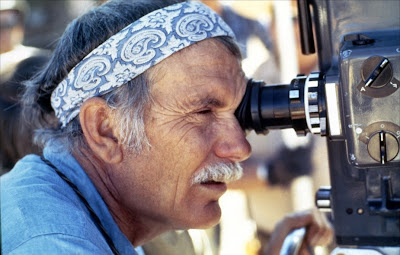 The facts of Sam’s life and career can be summarized thus:
David Samuel Peckinpah was born in 1925 in Fresno, Cal. His family had good Western credentials, his ancestors having, it is said, made the trip west by covered wagon. He grew up at Coarsegold, the ranch of his grandfather, the splendidly named Judge Denver Church (and was often there when he should have been at school). Peckinpah used the name Coarsegold for the camp in Ride the High Country. He played football at Fresno High School but after many discipline problems enrolled at the San Rafael Military Academy, then joined the US Marines.
Although he did not officially see combat, he witnessed much violence in China and claimed he was shot during an attack by Communist forces. On discharge he entered California State University in Fresno to study history. There he married a drama major, Mary Selland, and did graduate studies in drama at the University of Southern California, obtaining a Masters degree.
He got a job as a stagehand at KLAC-TV and then became an assistant of Don Siegel, working on several Siegel movies as dialogue coach. On Siegel’s recommendation he managed to get work writing for TV westerns and contributed to many, for example eleven Gunsmoke episodes and six of The Rifleman. You can get the complete list on Wikipedia. He also wrote a screenplay from the novel The Authentic Death of Hendry Jones, a draft that evolved into the rather poor Marlon Brando Western, One-Eyed Jacks (1961).
The summit of his TV career came when he wrote and directed a pilot called Trouble at Tres Cruzes, which was aired in March 1959 and became the series The Westerner, which he both wrote and produced in 1960, directing five of the episodes. Click here for our review of that show. The taciturn drifter Dave Blassingame (Brian Keith) was an obvious prototype of future Peckinpah Western characters. The series was quite violent for the time, one of the reasons it only lasted one season (another being that Sam was not the easiest person to get on with). One episode was developed into a feature film by Tom Gries and became the excellent Will Penny (click link for review). 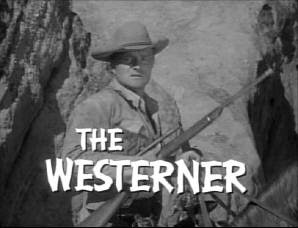 Then there were ten Western or semi-Western movies (clicking the livelinks will take you to our reviews of them) which he directed and/or wrote:
1.   The Deadly Companions (1961), his first, in some ways a cinematic spin-off of The Westerner, which he directed but did not write.
2.    Ride the High Country (1962), splendid, which he also wrote (or anyway rewrote extensively).
3.    Major Dundee (1965), mixed opinions, which he directed and wrote (more or less as he went along…)
4.   The Glory Guys (1965). Maybe this ought to be in brackets because although he wrote the first screenplay and started directing this semi-Custer film he was replaced as director, Arnold Laven being credited, and his script completely changed.
5.    Villa Rides (1968) which he also wrote, and was supposed to have directed, needs more brackets because again he was replaced and his script extensively rewritten.
6.    The Wild Bunch (1969), his chef d’oeuvre, which he wrote and directed. Mighty.
7.    The Ballad of Cable Hogue (1970), delightful, which he wrote and directed and which he often cited as his
favorite film.
8.    Junior Bonner (1972), if you call that a Western (it’s a modern rodeo picture). Excellent, though. He directed but did not write it.
9.    Pat Garrett & Billy the Kid (1973), regarded by many as his high point, at least in the director’s cut. Certainly the high point of celluloid Billy the Kidism. Rudy Wurlitzer credited as writer, Sam as director.
10. Bring Me the Head of Alfredo Garcia (1974) a cult Tarantinoesque bloodfest ante diem which you may (or may well not) regard as a Western. He directed and co-wrote it.
So it really only comes down to six true feature Westerns directed by him with two semi-Westerns and the odd other project.
He also acted quite often in very small parts. He was a bank teller in Wichita (1955), the dime novelist in China 9, Liberty 37 and the coffin maker in Pat Garrett, among other roles.
So that’s the Peckinpah Western canon.

The BFI Companion to Western article on him said, “Whereas the Italian Western trends towards farce, Peckinpah’s films … all tend towards tragedy.”

He was famously difficult to work with. Charlton Heston (star of Major Dundee) said, “Sam is the only person I’ve physically threatened on set”. James Coburn (also in Dundee) said “He was a genius for four hours a day, then he was gone.” At Sam’s funeral Robert Culp said, “The miracle of Sam was that he got any of [the movies] done at all … Rather than say ‘I wish he’d done one or two more’, let’s just thank that incredible, savage, iron, burning will that he got them made.”

He was often drunk on set, always over-budget (sometimes vastly), he quarreled fiercely with studio execs and he became in the end virtually unemployable. But he was a genius.