.
.
The nearest movies got to the truth about the Daltons (though it still wasn’t near)
.
.
The Dalton brothers, who had been shot down in a Coffeyville, Kansas alley in the 1940 Universal classic When the Daltons Rode, and again in the not-quite-so-classic The Daltons Ride Again in 1945, perished once more in Badman’s Territory  in ’46  and oft more, including of course when Matt Clark tracked them down on Stories of the Century, as he tracked down every other outlaw known to man, rode yet again in this made-for-TV epic in 1979.
.
.
This time the brothers were impersonated by Cliff Potts as Bob, Randy Quaid as Grat and Larry Wilcox as Emmett. The eldest, Ben, who was not anyway a bandit, does not appear this time as he did in 1940 and 1945 but there is Frank, the lawman killed in Oklahoma, and Bill, standing for office in California. Randy Quaid takes the honors while, to be honest, the others are a bit bland.
.
. 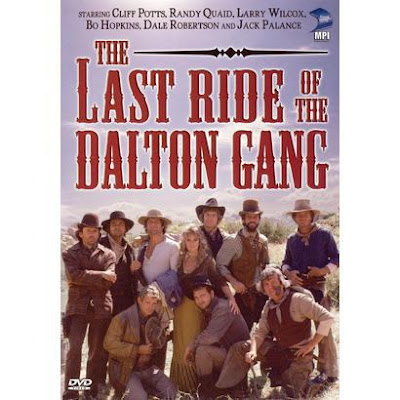 The movie has that made-for-TV look, with frequent fades-to-black for commercial breaks, and peaks and troughs of action for the same reason, which make it erratic as extended film viewing. The characters also all look as though they are very obviously wearing costumes and they all have 1970s hair. The make-up and wigs of the ‘elderly’ Emmett and Newcomb in 1930s California are frankly very poor. But it’s a big picture with lots of action and has clearly been made by a director and team who like Westerns.

Jack Palance is the real star. He plays an icy railroad detective hunting the Daltons. Railroads are, once again, the bad guys. They are cruel land-grabbers and unscrupulous cheats. We see the evil railroad barons gambling for huge stakes in decadent Chicago clubs. “It’s them damn railroads,” says Bob. “I’m gonna make them pay.” This rather corny device (and dialogue) makes the blatantly criminal and violent acts of train robbery more sympathetic. The Daltons are, after all, the heroes. It’s a standard ploy (see all the Jesse James movies). 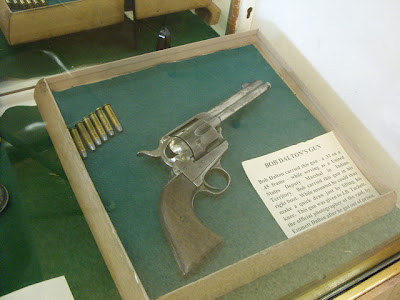 .
Dale Robertson, 56, is also back, crusty as ‘Hanging’ Judge Isaac Parker. He will hang any outlaw cheerfully but has a sneaking admiration for the Dalton boys. He has a final main-street quick-draw showdown with evil Detective Palance. That was really true to life.

The other outlaws, Bitter-Creek Newcomb, Bill Doolin, Blackfaced Charley Bryant, and so on, are satisfactory. Bo Hopkins as ‘Billy’ is the best of them. Julie Hill and Sharon Farrell provide the love interest. Farrell seems to have modeled her ‘madam’ on Julie Christie’s in McCabe & Mrs Miller.

The ambush and shoot-out at the failed bank raids are slightly reminiscent of the opening scenes of The Wild Bunch or Northfield in Cliff Robertson’s Cole Younger picture. 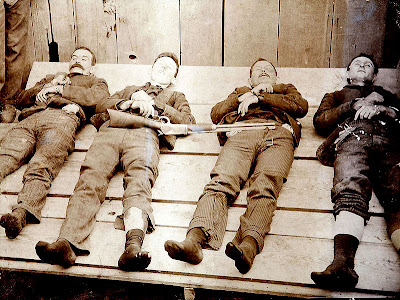 It was the last ride alright

.
By the way, there’s a great panoramic photograph of the Coffeyville scene here (external link) and a good diagram of the town in Ron Hansen’s book on them. The music won a ‘Wrangler award’ but I found it too falsely ‘comic’. There’s an obviously electric gaslight and they throw rubber strongboxes out of the train but never mind. Details. The Frank Stanley photography is nice. The director, Dan Curtis, loves smoke and dust to the point where it’s sometimes quite hard to see.

It’s generally professionally made, enjoyable and heaps better than many Westerns made for TV, even if not in the Lonesome Dove class.

The thing is that The Last Ride of the Dalton Gang is fiction, sometimes very much so, but it’s the closest to fact we have got so far on celluloid and the best cinematic representation of the gang we have had. Of course there are preposterous parts and a lot of it is hooey but they have made an effort and there are at least resemblances between this version and the Ron Hansen book. Furthermore, it’s fun.

So the ‘gang’ member Daltons were Gratton Hanley ‘Grat’ Dalton, born 1861; Robert Rennick Dalton, known as Bob, born in 1869; and Emmett Dalton, born 1871. Of these, Grat and Bob were shot to death in Coffeyville, Ks on October 5th, 1892, while Emmett survived, served a prison sentence, was pardoned and lived on until 1937.

William Marion ‘Bill’ Dalton (1865 – 1894) joined up with Bill Doolin and his gang after Coffeyville. Bill was shot and killed by a posse at his home in Ardmore, Oklahoma after a bak robbery in Longview, Texas.