The Duke and Rock show

We’ve been looking lately at the Western career of Rock Hudson. After the rather plodding Taza, Son of Cochise in 1954, which Hudson himself called “crap”, he generally avoided the genre until 1961, when he paired with Kirk Douglas in The Last Sunset, as we saw last time (the links will take you to our reviews). And for most of the rest of the 60s he also steered clear of saddle and Stetson. Maybe he thought it wasn’t for him anymore, or perhaps he was busy elsewhere. He did do a couple of war/action pictures, stuff like Tobruk and Ice Station Zebra, but no oaters. Until 1969.

Then in July 1968 he agreed to pair with the king of the big commercial Western at the time, the Duke, and do The Undefeated at Fox. It is said that his part was first offered to James Arness but he backed out.

It was produced by Robert L Jacks, who married Darryl Zanuck’s daughter Darrylin (they later divorced) and produced quite a few Westerns, big screen and small, for Fox and ones released by other studios. The best of the features (in my view) were Fox’s The Proud Ones and Man from Del Rio, released by United Artists. The original script was by Stan Hough (another Fox producer, known for Bandolero! also, and Mr Jean Peters) and writer/director Casey Robinson of Captain Blood fame, but neither is credited in the final film. Jacks bought it in December 1967, announcing that James Lee Barrett would do the screenplay. Barrett would become famous in the 70s for Smokey and the Bandit but earlier worked a lot with James Stewart and director AV McLaglen on Westerns, not always good ones it must be said, such as Shenandoah and Bandolero! Lewis B Patten also got a screenwriting credit on The Undefeated; he did Red Sundown in 1956 and Death of a Gunfighter in 1969, among other Westerns.

So there seems to have been a plethora of writers involved.

It’s an 1860s story, (very) loosely based on CSA General Joe Shelby’s crossing into Mexico with a thousand men, sinking his battle flag in the Rio Grande, rather than surrender at the end of the Civil War – thus being ‘undefeated’ – and his attempt to join with Maximilian’s Imperial Mexican forces as a ‘foreign legion’. In fact Maximilian declined to accept the ex-Confederates into his armed forces, but he did grant them land near Vera Cruz.

In the movie Rock plays the Shelby-like character, as Colonel James Langdon, who torches his plantation so that it won’t fall into the hands of carpetbaggers (and he pays off his force of Negroes by giving one of them his granddaddy’s watch, so doubtless they were very satisfied) and aims to cross into Mexico and join Maximilian. 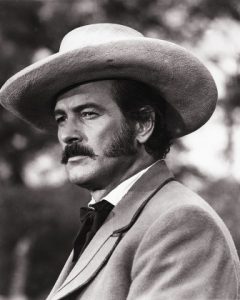 Wayne is also a colonel, John Henry Thomas, but a Union man of course.

After winning an engagement against one-armed Confederate Major Royal Dano, as it turns out three days after Appomattox, but who knew?, he hands his resignation in to General Paul Fix and is asked by Short Grub (Ben Johnson), “Where to, John Henry?” to which the reply is “West!” Thomas has the intention of rounding up and selling wild horses to compensate his men for their loyalty, friendship, and war service. 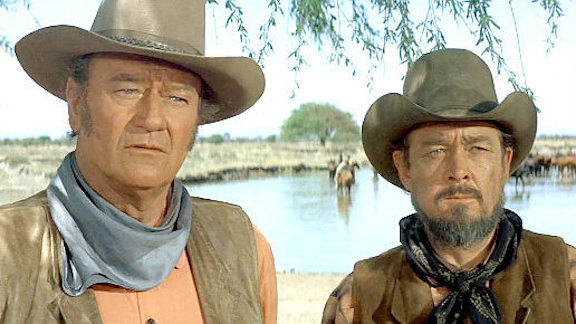 With his Indian adopted son Blue Boy (LA Rams quarterback Roman Gabriel – fellow Ram Merlin Olsen had a small part too) he rounds up 3000 head and aims to drive them across the border to sell them to Maximilian.

Comancheros under Pedro Armendariz present a threat to the Confederates and gallant Union Col. Thomas goes to their aid.

Later Thomas invites the Rebs, er, I mean Confederates, to a Fourth of July shindig, where Blue Boy and Langdon’s daughter Charlotte (Melissa Newman) fall in love. This match is daringly interracial and does not please the Southerners, though both dads seem very relaxed about the affair.

Both sides put up a dumb-ox prize fighter for a bout, which of course degenerates into a McLintock!-style free-for-all, supposed to be highly amusing. You do get the feeling right about now that the writers and director were searching about for something to fill in the minutes, which are now beginning to drag. Roger Ebert said, “In the midst of the love affair, Hudson invites Wayne’s men to a Fourth of July celebration. This is the sort of thing Ford liked to throw in. But McLaglen bobbles it. The party quickly degenerates into one of those stagy fights that have you squirming in your seat. It is not necessarily hilarious to see a big man hit a small man several times. Not even if everybody is laughing.”

With old enmities resurfacing and degenerating into open conflict, the two parties go their separate ways. When Langdon arrives in Mexico Maximilian has been overthrown (this was actually in May 1867 so I’m not quite sure what has happened in the interim). The new (fictional) warlord is General Rojas (Antonio, billed as Tony Aguilar, the famous Mexican singer-actor who was to write and star as Zapata in 1970). Normally in Hollywood movies Maximilian and his foreign forces are the baddies and the Juaristas are noble freedom fighters but here the Juaristas under the general (pronounced heneral, natch) are swine, shooting people with a firing squad.  Rojas takes Rock and his men captive and will only release them if Thomas hands over his 3000 horses. Will he do it? There’s a force of French cavalry still loyal to Maximilian who will try to stop him…

Hudson was used to co-starring and, preferring the ‘strong silent type’ of role, did especially well opposite a perhaps more charismatic or at least extrovert actor. The Last Sunset with Douglas had been a good example. How would he fare with Wayne? According to his partner Marc Christian, Wayne started by nagging at Rock during filming. In Mark Griffin’s biography of Hudson, All that Heaven Allows, Wayne is said to have started to ‘direct’ Hudson early on, constantly suggesting what he should do on camera. When Hudson began to do the same to Wayne, Wayne pointed his finger at Hudson and said, ‘I like you.’ The suggestions stopped, and the two men became frequent partners in chess and bridge. Duke joked that he’d rather have been born with Hudson’s movie star face than his own. 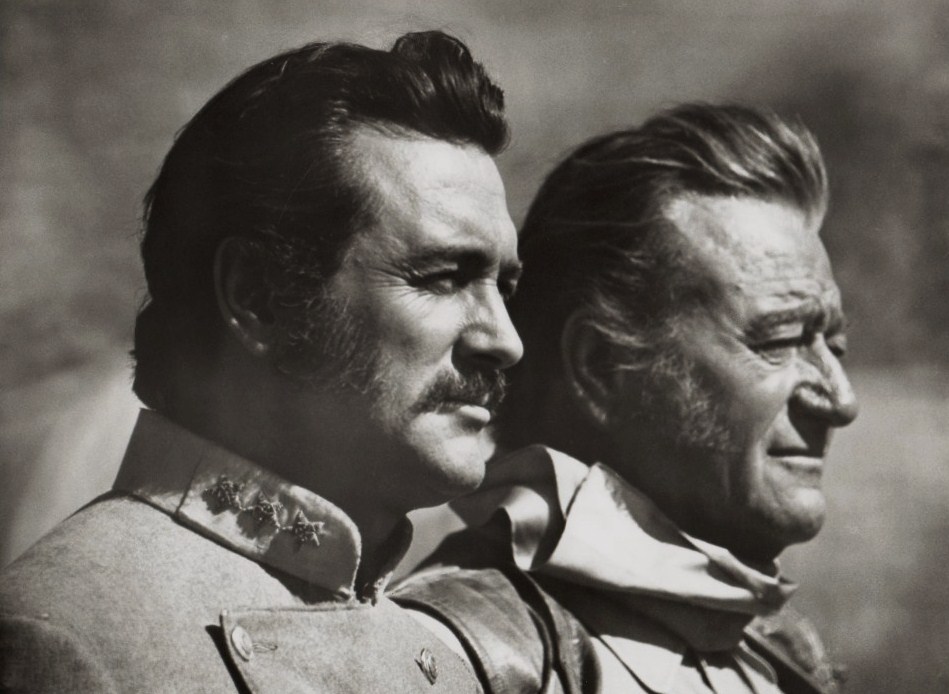 Among the support cast there are many of ‘the usual suspects’. Ben Johnson and Harry Carey do a lot of ropin’ and ridin’.

Also in the cast are Bruce Cabot, Pedro Armendariz Jr and Paul Fix, Wayne and ex-Ford stock company regulars all. Dub Taylor is the obligatory dirty old cook and he has what he calls a mangy old cat, though the puss looked quite sleek to me. Sadly, both are casualties of the trip.

William Clothier, a favorite Ford and Wayne cinematographer, was behind the camera and, as ever, did a good job of the Durango locations beloved by Wayne. It’s in Panavision with color by De Luxe and looks big and glossy. There are some lovely shots of running horses.

The music, by Hugo Montenegro, verges on the extraordinary, with one long scene played against an interminable sustained single note, perhaps to suggest tension, which, though, it doesn’t.

The picture was designed as a big, commercial 60s crowd-pleaser aimed at the loyal fans and able to fill theaters all over the world, especially in the Mid-West, which it did. It earned $8m, pretty good. Unfortunately, though, the budget had been very substantial, at over $7m, and according to Fox records with ancillary costs the film required $12.4m in rentals to break even. Western box office sales that year went to Butch Cassidy and the Sundance Kid, which grossed a huge $102m, and other pictures in the genre, such as Paint Your Wagon and Wayne’s own True Grit did a lot better ($31m each). The Undefeated languished at No. 18 in the rankings that year. Oh well.

Critics were a bit down on it. Variety said, “Basically wrong is the whole uneven mood of the film. Neither Wayne or Hudson seems to know whether they are in a light comedy or a serious drama. They are, to use the word in an exact sense, simply unbelievable”. The review added, “Film has a basic storyline, character elements and dialog for what might have been a superior drama and possibly a great western. But Andrew McLaglen’s direction seems to consist of splicing together cliches, static camera work and Central Casting of the bit parts.”

I’m afraid this is probably true. Wayne groupie McLaglen had a sound record helming Western TV shows like Gunsmoke and Have Gun – Will Travel but his feature Western CV is far from spectacular. His first, Gun the Man Down in 1956, was little more than a Gunsmoke spin-off with James Arness and has all the look of a TV movie; McLintock! with Wayne was commercially successful but (in my view) awful. Shenandoah (1965) was one of James Stewart’s weaker efforts in the genre and as for The Rare Breed the year after, it was embarrassingly bad. The Way West in 1967 was boring and Bandolero! in ’68 (with Stewart again) plain weak. I quite like Chisum and Cahill, US Marshal, in a commercial Dukey kind of way. But no, sorry, AV hadn’t got it. It is said that Henry King was first going to helm it. That would have been something but he hadn’t directed a Western since The Bravados in 1958 and hadn’t done any film since 1962.

The New York Times at the time thought there were very faint Fordian echoes (and I suppose Ford might have done it – he would certainly have done it better – but not after Cheyenne Autumn; Roger Ebert wrote, “It exhibits a lot of the Ford trademarks”) but the Times thought that the picture was “easy to take and even easier to forget.”

Dennis Schwartz wrote that McLaglen “directs as a homage to John Ford westerns, but shows few signs of having the same talent.”

Roger Ebert thought there was the odd good scene and amusing bit of dialogue but didn’t like Hudson, saying “these scenes help pass the time and help you forget how wooden and uninteresting Hudson is. Which is pretty wooden and uninteresting indeed.” A bit harsh, I think. Schwartz disagreed anyway: “The big surprise is that not only does Rock hold his own with the Duke, but puts in a more spirited performance.”

Brian Garfield said it was “A very disappointing movie to say the least.”

All in all it’s a kind of Major Dundee without the quality. And I’m not that keen on Major Dundee. Hudson himself admitted in a 1980 interview that he thought the movie was “crap”, a word he had used to describe Taza. It wasn’t crap, actually.  There are some good bits. Duke does his Wayne thing and Rock was pretty good, I thought (apart from his fake Southern drawl). It’s a visually attractive picture. Many people do like it.

But it’s too long (119 minutes but seems endless) and slow-paced, and derivative. It basically never recovered from its direction.