.
.
A little masterpiece
.
.
Lonely Are The Brave is a little masterpiece. It was Kirk Douglas’s favorite film. It was certainly his best Western (if Western it be; I think it is). Douglas was capable of overacting and did not immediately strike one as a convincing and natural Westerner. But in this movie he underplays it superbly and his fine performance is admirably counterbalanced by that of Walter Matthau as a droll, cynical (but basically good-hearted) sheriff.
.
. 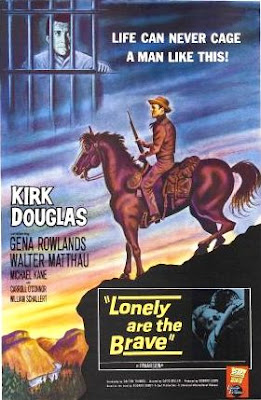 .
It’s a modern Western in which Douglas on the run is hunted in the New Mexico mountains by a helicopter and jeep. But apart from these trappings it is essentially a classic oater as the loner hero fights to overcome both the law and nature in the raw to escape and go his lonely way.
Of all the Westerns in which the horse plays a central part, and there are not a few, this is the most important. Whiskey, Douglas’s fancy mare, is a central character, as much as Douglas himself or Matthau. Douglas could escape by leaving the horse and going it alone but a cowpoke doesn’t abandon his mount, not when the going is rough anyway, and in the end (or not quite the end) Douglas needs Whiskey. True partners, they go off together into the metaphoric Mexican sunset. The real end comes after the sunset and is a tragic one.
.
.

.
When Douglas wanted an intelligent Triggerish horse for his live-action cartoon Western The Villain in 1979, he named it Whiskey.
Other acting, apart from the horse, is also good. George Kennedy is a sadistic prison warder with a Mexican accent. Gena Rowlands is excellent as the wife of Kirk’s best friend – but she also kind of loves Kirk. She is dismissive of the macho cowboy pretensions yet sympathetic to a decent man. There’s a hint of Shane here. Carroll O’Conner is good as a tired truck driver, and director Miller does well to show us the inexorable march through state after state of this huge semi carrying ‘bathroom fixtures’, building to the inevitable climax. Best is the wry Sheriff Walter Matthau whose duty it is to hunt Kirk down yet who is more than half on his side.
.
. 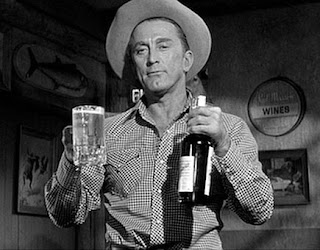 .
Visually, Lonely Are the Brave is very fine. Like the horse, the New Mexico locations are almost a character in the story. The movie was shot around Albuquerque and is quite stunning in its beauty. But then everyone knows that New Mexico is the most beautiful part of the United States and probably the most beautiful place in the world (I just need to check up on a few more places in Europe and Asia but I’m pretty sure I’m right).
The black & white photography by Philip Lathrop is breathtakingly good. Lathrop came from TV and later did workmanlike movies like The Pink Panther and Airport 1975, that kind of thing, but every so often he photographed a blindingly good one like this movie or Point Blank.
.
. 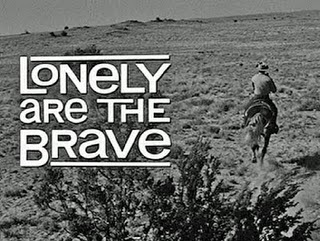 .
David Miller, the director, is not known for Westerns (he did the 1941 but that’s all) yet he does a fine job here and captures the spirit of the Western movie perfectly. He pays excellent attention to the beauty and power of landscape (he’d probably seen an Anthony Mann Western or two…) and he develops character most interestingly.
Only the script is a bit leaden. That could happen with Dalton Trumbo. Having the best name in the world (Dalton Trumbo) doesn’t mean you can automatically write the best Western screenplay. A hero of the Hollywood Ten and winner of two Academy Awards, he worked on few Westerns (he wrote the unsprkling Cowboy in 1958 and the slightly routine The Last Sunset, with Kirk, the year before Lonely) and didn’t really ‘get’ it. Douglas, who had purchased the rights to the original Edward Abbey novel, was a friend of Trumbo’s (Trumbo did Spartacus) and thought the screenplay perfect, and of course Trumbo was admirably placed to write about lone heroes defying the pressures of the modern world. Not that the screenplay is bad, you understand, and it certainly prizes individualism, just that it is rather overstated. Too much crossing of symbolic highways, for example. Fortunately, the gritty performances meant that the dreaded Nostalgia, which could have sunk such a picture, was pretty well avoided. The movie is in some ways Hud-ish but it doesn’t so much debunk the West or portray a sterile one as ask the question whether the West (or rather ‘the West’) can survive an age of Interstates and helicopters. The answer has to be no.
.
. 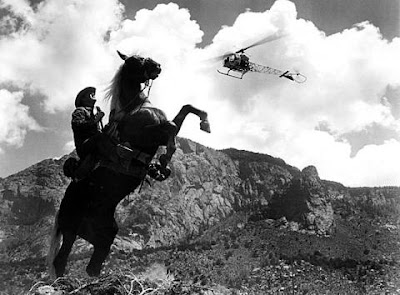 .
Low key, with a small cast, in black & white, this is no majestic, sweeping Western. Instead, it’s like a diamond, small, hard and precious. So many ‘modern’ Westerns aspired to portray the sadness of the passing of the old ways and the tragedy of the fact that Western virtues were outmoded and now pointless. This film (which must have influenced Cormac McCarthy) achieved it.
.
PrevPreviousLast Train from Gun Hill (Paramount, 1959)
NextThe Way West (United Artists, 1967)Next