.
.
A good Western but it missed the train to greatness
.
.
While Columbia brought out its Delmer Daves-directed 3:10 to Yuma in 1957, Paramount followed hard on its hooves with their version, Last Train from Gun Hill. The movies have significant differences but they have the same essential theme of a defender of the law holed up in a hotel with the murderer he has arrested, waiting to board a train and being besieged by the killer’s supporters. This theme is, of course, related to those movies with hold-them-in-the-jail-till-the-US-marshal gets-here plots (Rio Bravo and, it sometimes seems, 99% of all Howard Hawks Westerns!) and the ones where the townsfolk won’t lift a finger to help like High Noon.
.
. 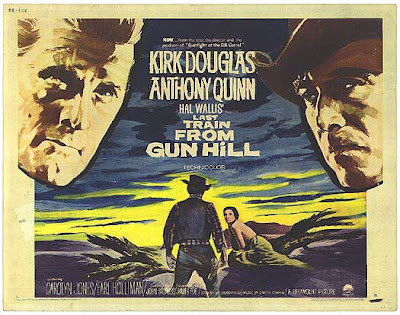 Noirish poster
.
This time, Kirk Douglas is the gritty town marshal whose beautiful Indian wife, Ziva Rodann, is raped and killed (off-screen but it’s very shocking) by cowardly slimeball Earl Holliman, spoilt son of rich rancher Anthony Quinn, Douglas’s old pal but rather a bully. Douglas goes to Gun Hill to get the killer and bring him back, on the last train at 9 pm. Quinn, of course, won’t allow it and a showdown is certain. The theme was ripped off, as a cliché, in the cheap and tacky Lawman, where Lee J Cobb played the Quinn figure.
.
. 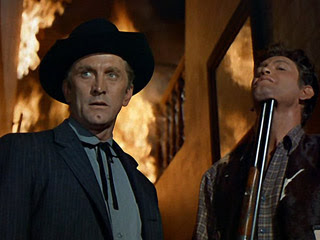 Nasty if his finger slipped…
.
And since we are doing references, the weak son of a big rancher theme is also treated in Gun for a Coward (Universal, 1957) and Gunman’s Walk (Columbia, 1958). Vengeance Valley (MGM, 1951) and The Man from Laramie (Columbia, 1955) too. So we are riding a well-worn trail here.
Gun Hill is directed by John Sturges (he reassembled his OK Corral crew, though this time Douglas takes the Earpish part) and is workmanlike, solid and occasionally very good, though perhaps not a real classic. Sturges has a mixed record, and was capable of work as good as Bad Day at Black Rock and as bad as The Hallelujah Trail. Gun Hill is in neither category. There is tension and the thing is economically directed, with a stamp of quality. James Poe wrote the tidy screenplay from a Les Crutchfield story.

Douglas is grimly passionate and Quinn is, as always, authoritative and velvet-gloved charming. Carolyn Jones, as Quinn’s abused girl, disillusioned with him and helping Douglas, is also very good, and in fact she is the closest Sturges and his writer come in this one to an interesting exploration of character. There’s a suggested feminist theme here, though sadly undeveloped (well, it was a 1950s Western movie). Brad Dexter has a minor role as the ranch foreman but is strong. 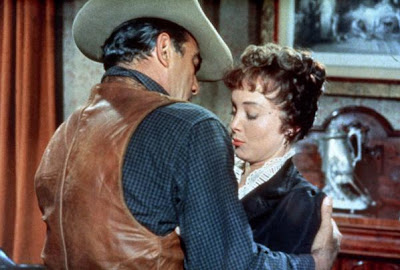 Quinn romances a reluctant Carolyn
.
The Western town (Old Tucson) is very handsome, if too neat, and the surrounding country beautiful (Charles Lang was cameraman so it’s excellent VistaVision photography). The music is by Dimitri Tiomkin. So Sturges had all the picture cards in his poker hand and it’s an above-average oater.
.
. 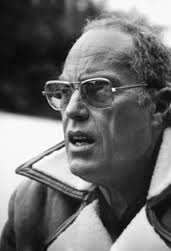 Sturges: good this time
.
Nevertheless, it’s not a great Western – Sturges made very few of those. Gun Hill is well put together but it’s a bit one dimensional and lacks spark. It isn’t as good as 3:10. Still, it’s one of Kirk Douglas’s better Western performances and the grim theme gives him no scope for cheery-chappy hamming it up, to which he was prone. He’s quite convincing as the determined marshal.

But while suspenseful, the film never really moves beyond the brave marshal doing his duty come what may.

PrevPreviousMan Without A Star (Universal, 1955)
NextLonely Are the Brave (Universal, 1962)Next
Jeff Arnold © 2022 – All rights reserved – Designed by BetterCallChris
Scroll Up