You can argue whether this very fine film is a Western. Purists would reject it because of its modern setting but it’s a Western in the sense that a tough hombre takes the law into his own hands, rides across the Rio Grande and does what a man’s gotta do.

It’s the second time that Tommy Lee Jones has made the promise to bury a dead friend far away. He really needs to stop doing that. Last time it was Robert Duvall. This time it’s Julio Cedillo, the Melquiades of the title.
.
. 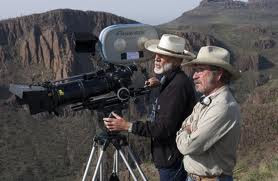 Fine photography from Chris Menges and direction from TL Jones
.
The story is not told in a linear way and is full of flashbacks: you have to piece the narrative together. That reflects perhaps the confusion of the participants. But this is not irritating. Certainly the film repays a second viewing. The screenplay (Guillermo Arriaga, who had done Powder Keg and 21 Grams) is outstandingly good.
Southern Texas and northern Mexico are shown to be the same culture with an international border slashed artificially across it, with death and pain as a result. Perhaps we are shown more decency south of the border. We are certainly shown a spiritually arid life north of it. The life of the women in particular, Lou Ann (January Jones, excellent) and Rachel (Melissa Leo, also very good indeed) is mind-numbingly boring and empty. 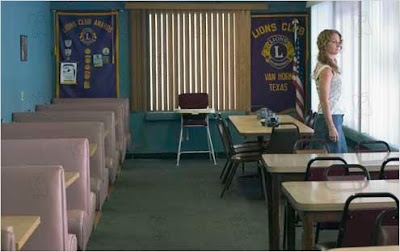 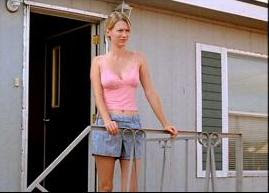 .
It’s almost a male love story with nothing gay about it. The friendship between Pete (Tommy Lee Jones) and Melquiades (Mel, as TLJ calls him) is touching and deep. Key themes are friendship and alienation. It is said that TLJ gave the cast Albert Camus’s l’étranger to read.
Barry Pepper is outstanding as Mike Norton, the oafish, trailer-park rookie border patrolman who is just an overgrown adolescent but who becomes a man and comes, bizarrely, to care for his captor. At the end that regard is reciprocated. Mike believes that Pete, the sensitive sadist, will kill him and we, the viewers, believe that too. Yet something happens between the two.
.
. 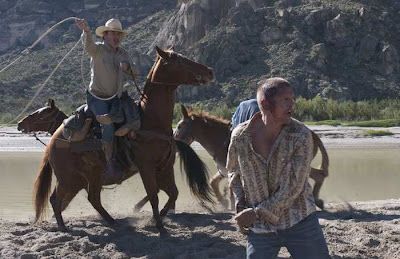 The landscape is barren and beautiful and beautifully photographed by Chris Menges. The Marco Beltrami music is atmospheric and appropriate. It’s not a ‘Western’ score in any traditional sense (even if he did study under Morricone). The country/pop music often played is just what people would listen to but the songs also try to say something in different scenes.
One of them is sung by Dwight Yoakam, probably my favorite country singer, who has matured into an excellent actor. He is the unsympathetic, overweight Sheriff Belmont, who is too lazy and prejudiced to care much who shot Melquiades, and if it was a cop he’d rather cover it up. Rachel is his motel-bedroom mistress, not because she loves the slob but out of sheer boredom.
.
.

Yoakam: excellent
.
Tommy Lee Jones directed, produced and starred in the movie. Jones’s own performance is superb. TLJ developed a type of Western character, a Texan tough as old boots, stoic, not suffering fools gladly, keeping people at arm’s length, knowing, taciturn but once committed, totally engaged. Now add a pinch of world-weariness. There you have his Woodrow McCall in Lonesome Dove, his Samuel Jones in The Missing, his Ed Tom Bell in No Country for Old Men, his George Briggs in The Homesman. Mr Jones is a Texan born and bred, who graduated magna cum laude from Harvard, majoring in English. His Westerns are subtle, penetrating, atmospheric and elegiac.
.
. 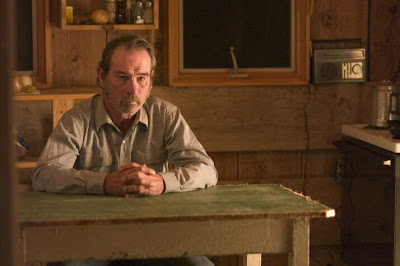 Alienation
.
So, great acting, writing, photography, music – a first class film which justifiably won the Best Male Actor and Best Screenplay awards in Cannes.
Western male codes of honor, harsh terrain, violence, a hint of madness: just a tinge of Alfredo Garcia. This is the kind of film Sam Peckinpah might have made had he lived on and been reading Cormac McCarthy – and Camus, of course.