Pretty poor all round

This is a European film about revolution rather than a Western but as it is usually listed as a Western in TV schedules, stocked in the ‘Western’ racks of DVD stores and appears in some books about Westerns, it is included here. At best you might call it a post-Western.
It was directed by Sergio Leone and it shows: too long, endless hyper-close-ups of people’s eyes, those interminable shots of people staring at each other or at the camera interspersed with action climaxes, including much use of dynamite and machine-guns.
.
. 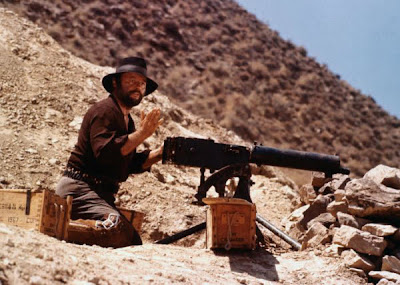 .
The music (Ennio Morricone) is of that unpleasant jangly + vocal kind we have become used to, accompanied by those irritating high woo-woo vocals whenever we get to romantic parts. The ‘romantic’ parts don’t concern women or love, of course (except very briefly in flash-backs of the terrorist’s youth), but might accompany death or an attempt to suggest regret after a slaughter (not that there is much regretting slaughter). Many people regard Morricone as talented but I’m not one of them.

The weakest part of this movie is the acting. Rod Steiger, an awful ham, is wide-eyed and chews the scenery. James Coburn is unusually poor for him. Both have very phony accents (Mexican and Irish) that would make a Mexican or an Irishman cringe. None of the supporting actors (mostly Italian) shines.
.
. 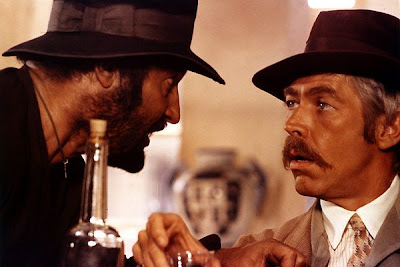 .
The Steiger part was written for Eli Wallach. He would have been better, though it wouldn’t have improved things much.
Set in 1912 Mexico, it tells of revolution and perhaps tries to suggest the different motives for which people become involved. The Irish terrorist (Coburn) tries to politicize the Mexican bandit (Steiger). There’s an attempt to understand betrayal. That’s about all there is of ‘message’. There was to have been a Brechtian theme of the younger man educating the older one but that seems to have been discarded, presumably because Steiger and Coburn were more or less the same age.  Most of the movie is just the couple mowing down endless soldiers.
.
. 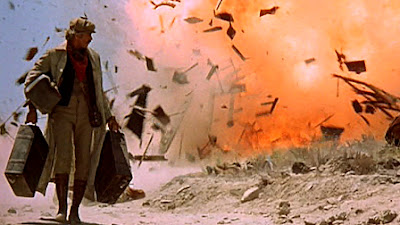 .
It’s a big-budget picture with hordes of extras and a spectacular train crash. It has little or nothing to do with history (not that this would disqualify it as a good Western if it were one). The Federales are like Nazis and the revolutionaries like Italian partisans. There are quotes from Mao. It can’t really make its mind up whether it’s 1912, 1943 or 1968. But it’s fake for all three.
.
. 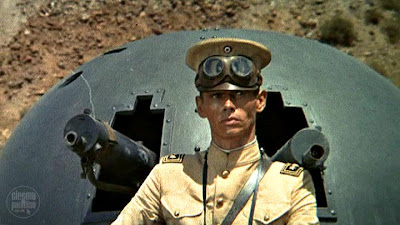 .
There’s a curious huge stagecoach like a luxurious Pullman car, which holds the interest for a short while.

I suppose as a comic it’s OK. If you like comics. But you’d have to be no more than 12 really.

Giù la testa really means ‘Keep your head down’. Leone insisted that Duck, you sucker was common American slang. Maybe it is on the upper west side of Rome. The other title was an obvious nod to Leone’s earlier picture.

The movie starts with Steiger pissing and that rather sets the tone. Some art-film buffs probably think this is a great film. Personally I think that even if it were a Western it would be a poor one. Leone and his team were usually hopeless and I don’t know of a quality film they made. Once Upon a Time in the West was the nearest they got, but even that… This one certainly isn’t any good.
A Bullet for the General (Argent Films, 1966) is better. It’s well acted at least. If you want a Mexican revolution spaghetti, watch that.