And Starring Pancho Villa As Himself (HBO, 2004) 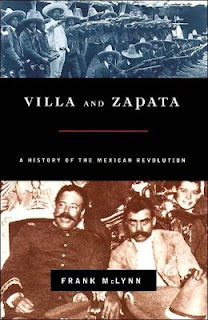 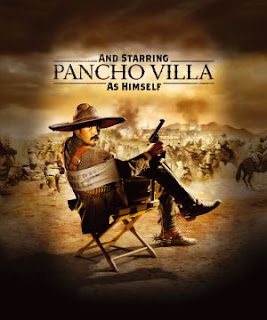 Excellent film
.
The film has one huge advantage; it stars Antonio Banderas who captures perfectly the energy, ruthlessness, charm, courage, affection and violence of Villa. He is perfectly splendid.
.
. 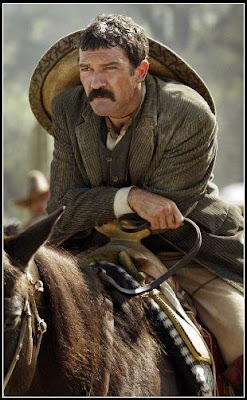 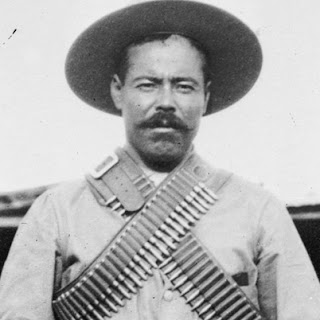 .
The film was nominated for and won a heap of awards, including an Emmy, and justifiably so. Its production values are sky high (they should be; the budget was $30m, a huge sum for a TV film). The direction (Australian Bruce Beresford, Driving Miss Daisy, A Good Man in Africa, but no Westerns) is faultless. The editing is taut and exciting (that’s what got the Emmy). The Peter James photography is fine and the music by Stephen Endelman and Joseph Vitarelli is right. And the script is very well written by Larry Gelbart (best known for Tootsie but we’ll let that pass).
The story is based on the amazing, true one of Villa doing a deal with an American motion picture company to film battles as they happened. Villa needed US support and gold. The movie got him both. He really did agree to fight his battles in daylight and re-enact any that weren’t captured on film.
.
. 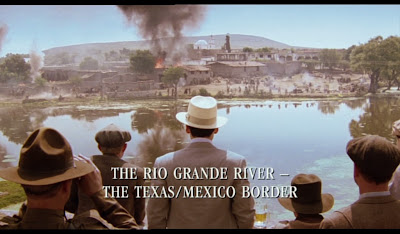 Spectators on the Texas side
.
Playing opposite Banderas as “the other Francisco” is Eion Bailey as Frank Thayer, who is solid and does a good job. He had had a part in Fight Club but is best known for Band of Brothers, but no Westerns. Playing foil to Villa’s fire and fury (license to chew the scenery), Bailey was rather obliged to be calm but at times his performance verges on the stolid. Villa films are obliged to have an American as foil, usually a journalist. There is also Alan Arkin, excellent as New York Jewish machine-gunner Sam Drebben, with a good aim and a foul mouth.
.
. 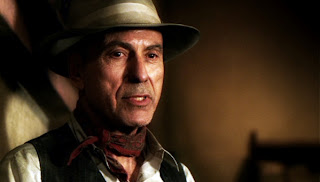 Arkin: excellent
.
Damián Alcázar does a fine job as Villa’s private executioner, the odious and sadistic Rodolfo Fierro (who was hated by everyone, especially his own men, and came to a grisly end not shown in the film). He was ‘Sierra’ (Leo Carrillo) in the 1934 movie. The brutality of the man is symbolized in both films by his shooting more than one captive with the same bullet “to save ammunition.” The symbolic death of a boy soldier is another moment in this film reprised from the ’34 movie.
.
. 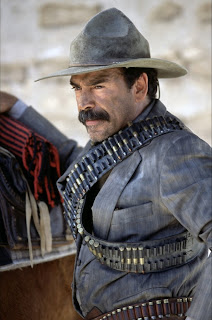 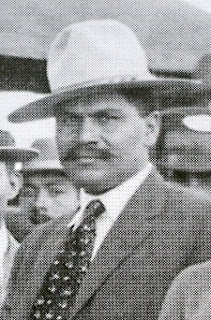 The left-wing journalist John Reed appears (Matt Day) but doesn’t have much of a part. Giants of the cinema DW Griffith and Raoul Walsh are played by Colm Feore and Kyle Chandler respectively. Walsh as a swashbuckling young actor played the young Villa. Here he is before his eye-patch days. He actually also directed the Battle of Torreon scenes.

Pedro Armendariz Jr, who plays Don Luis Terrazas, played Pancho Villa in the movie Old Gringo, and is the son of the famous Pedro Armendariz who also played Pancho Villa in Mexican films.
Good stuff. The actual contract that Villa signed with Thayer and the Mutual Film Company on 5 January 1914 to film the battle of Ojinaga still exists and is in a museum in Mexico City. Tragically, the original movie, directed by Christy Cabanne and written by Frank E Woods in 1914, has been lost, like so many early films of inestimable historical value, although a few scenes still exist in the Library of Congress in Washington DC. There’s an interesting documentary  about the lost reels made by the University of Guadalajara, Los Rollos perdidos de Pancho Villa, which includes some fascinating existing scenes. But this HBO picture is a worthy tribute to that lost film and, more importantly, to the great Pancho Villa.
.
. 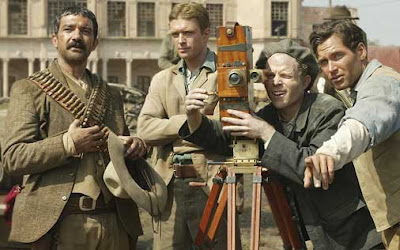 Villa and the film crew
.
The movie is a bit pro-Villa, which is what the Hearst newspapers accused Griffith’s vanished classic of being, but that’s partly because of Banderas’s charisma, and the film shows enough of the horrors to avoid accusations of whitewash. The film was made during the 2003 invasion of Iraq: maybe we are supposed to see Fox News in the jingoistic reporting of the Hearst Publishing Company. Jack Reed reminds Thayer at his film’s premiere, “The first casualty of war is truth”.
This HBO picture is well worth a look.