Fort Worth is a 1950s Randolph Scott Western which is rather good. It has a very complex plot but a lot of zip.
It was directed by Edwin L Marin, he of Tall in the Saddle fame. He’d also done Abilene Town and Colt .45 with Randy.  Sadly, Fort Worth was his last Western and he checked in his jodhpurs and megaphone permanently the same year.
.
. 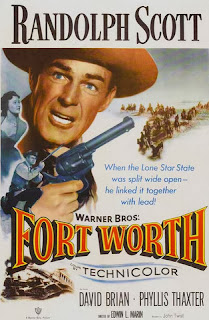 Classic
.
It’s the old one about the gunfighter hanging up his irons because he has come to believe that the pen is mightier than the Colt. He sets up an independent newspaper in Fort Worth. Of course, as in all such films, he is finally obliged to buckle on his six-guns again so that kind of undermines the principle; but that’s Westerns for you.
The story also has a railroad-coming-to-town theme, an evil rancher and an unscrupulous townsman who wants to own the whole place, so all bases are covered. There’s even a train on fire, Dodge City-style and partially pinched fom there, and a stampede. The rogue who wants to rule the town is played by David Brian in his first Western (the following year to be the excellently-named Austin McCool, the raider leader in Springfield Rifle). He has panache and presence and makes a very good charming scumbag. Like the great Lyle Bettger, he is smooth as a blond villain, but a bit beefier than Lyle.
.
. 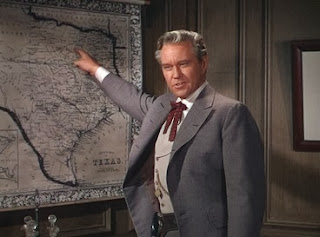 First Fort Worth, then all Texas

The New York Times was a bit unkind about David Brian’s Western prowess. “Mr. Brian, incidentally, has no business near a saddle. In fact, he’d better go back to cuffing Joan Crawford around or next time he may see a horse laugh.” Ouch. But the NYT was wrong: watch Brian as the saloon-owning heavy in the Rory Calhoun Western Dawn at Socorro – he’s brilliant.

I like the movie for several reasons, not least because Ray Teal is the ruthless rancher and is absolutely splendid. Mr Teal was well up there with Richard Boone and Bruce Dern as one of the top ten ever heavies (though would play avuncular good guy equally well). He was never less than excellent. 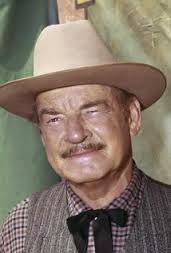 Ray the Great
.
Randolph Scott is in fine fettle, with his six-guns strapped over his printer’s apron.
The Woman is Phyllis Thaxter (she was to appear in Springfield Rifle too) and, as in many Westerns, she bloodthirstily urges the good hero to kill in a way that today would have her in court on trial for incitement to murder but which then seemed perfectly normal. Actually, even by 1951 (or 1851) standards, she is a bit unpleasant.
.
. 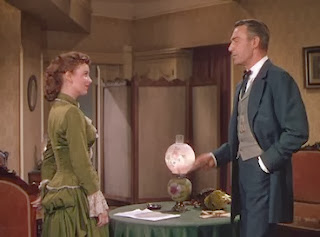 .
Chubby Johnson is a cowardly sheriff under rogue Brian’s thumb.
.
. 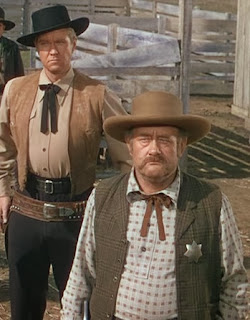 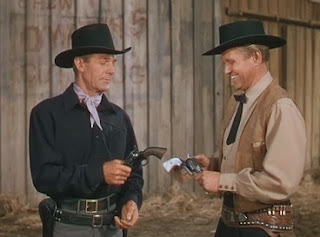 They swap guns
.
There are worshipful references to Sam Houston and heroic music is played when he appears (or a portrait of him does anyway).
The ending is a snap-happy one with everything coming right in the last ten seconds. Randy looks delighted to have Phyllis in his arms. I’d watch out if I were him. Or do I mean he? He sounds a bit precious these days, I’ll stick with him.

.
.
Apparently the première was in Fort Worth and Randy took part in a horse race there, judged a beauty contest and at the railyard participated in the re-enactment of a train robbery.
Great stuff and definitely worth a look, e-pards.
.
PrevPreviousThe Unforgiven (UA, 1960)
NextApache Territory (Columbia, 1958)Next