Both to be enjoyed – but I prefer the book

Ernest Haycox’s 1941 novel Trail Town is a dark and somber affair. Its central character is Dan Mitchell, marshal of the Kansas cow town of River Bend, who seems a solitary, even lonely man, trying to keep the peace between warring factions but knowing he is doomed to fail. 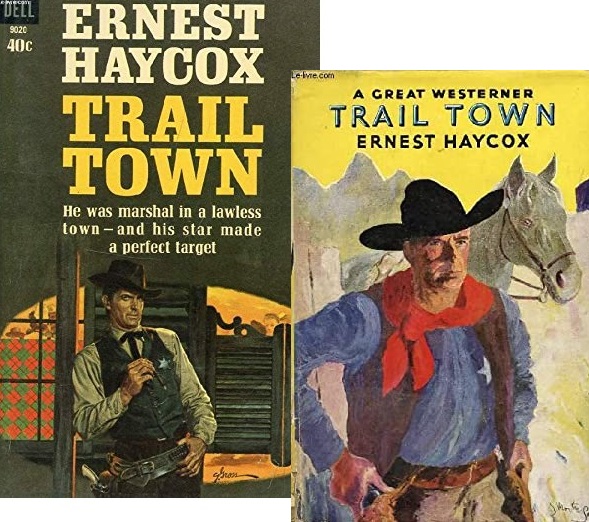 There is a sense of foreboding throughout the story, much of which is set at night, and many, even most of the characters are unhappy or broken people, with no future. This is not a breezy, cheerful novel to life the spirits, by any means.

But it is beautifully crafted and highly atmospheric. Haycox, in the early 40s, by dint of sheer hard work and grit, had matured from a slightly ‘meanwhile-back-at-the-ranch’ pulp writer into an author of great skill, a creator of interesting and subtle characters – good people showing weakness and making errors, bad ones with saving graces capable of nobility.

These folk, the dramatis personae of a dramatic story, move in irregular orbits about the marshal, occasionally crashing into each other. We have the ‘civilized’ section of the community, unofficially led by storekeeper Ed Balder and his sharp and rather overbearing wife, and allied with these people, or at least using them for the moment to further his own ambitions, is the scheming Ford Green. Green and the beautiful daughter of a local rancher, Sherry Gault, have drifted into an unimpassioned engagement; this relationship seems more a result of inertia than love.

These respectable people live as far as Willow Street, the dividing line, and on the other side of the tracks, as it were, we have the sporting crowd. The saloons, gambling joints and brothels (though the latter are not specifically mentioned, only hinted at) that cater to the Texan trail hands who have driven the herds up to the railhead, run all along Race Street. The leader of this crowd is Charley Fair, saloon keeper and pretty tough guy. He has lost three fingers in an unspecified incident (probably a fight, we assume) but otherwise has very much all his faculties. He has as ally a disreputable local rustler, Jett Younger, whom I think of as a kind of Cowboy figure, for Earp/Tombstone lovers, a cross between Curly Bill Brocius and John Ringo if you like. Also in this party is one of Fair’s gamblers, George Hazelhurst, who has more than a hint of Doc Holliday about him. And broken, no-good George (we do not know the details of his murky past) will, despite himself, fall for Irma Gatewood, the rather flighty young wife of a stolid townsman.

These two communities live in uneasy fashion side by side, detesting each other. Yet the disreputable saloons attract the trail herds, whose members also buy in the respectable people’s stores and businesses. It’s an uneasy but symbiotic relationship.

And tall Dan Mitchell walks the line, or rather rides it on his buckskin, between these two warring sides, favoring neither, Earpishly buffaloing cowpokes rather than shooting them, attempting to keep the peace. He falls foul of the equally tall and very domineering Texan trail boss Cap Ryker, and though Ryker is discomfited and obliged to withdraw in the face of Mitchell’s stony strength, he vows to return and get his revenge, and you kind of know he will.

And Mitchell finds himself increasingly attracted to Sherry Gault. Ford Green will not forgive that.

There’s another lawman based in town, the county sheriff, with the entertaining name of Bravo Trimble. Trimble, though, does not have the probity or impartiality of Marshal Mitchell. He is pretty well in the pocket of the Balder party. And he is very reluctant to act in any way that might endanger him – such as, say, arresting a rustler. He is essentially a rather pathetic figure.

Ford Green actively plots for a conflagration. He is not interested in a peaceful resolution to the conflict. He wants mass violence so that he can get the political credit for clearing it up, and to this end he brings in a noted lawman from another (now overly peaceful and therefore dull) town, a certain Bill Bexar. Bexar is famed for the skill with which he wields his two guns and is none too scrupulous either. There is definitely something Wild Bill-ish about Bill Bexar. And if in the process Bill Bexar eliminates the irritating peace-keeping Marshal Mitchell, well, so much the better.

Complicating the ‘respectable’ vs. ‘sporting’ groupings is the increasing arrival of a third force, homesteaders, by train and wagon, and so we get the classic cattleman/sodbuster conflict that features so often in Western books and movies. Naturally, barbed wire will figure largely. Indeed, it will incite the climax of the action. These settlers don’t seem to have a leader as such, though one of them, young Henry Dreiser, will play quite an important part in the plot, especially when he recognizes in River Bend one of Big Annie’s girls, Rita, as a former sweetheart of his.

So that’s the set-up. Also attractive are other characters, who play smaller parts, such as Ad Morfitt, the night marshal, old, vastly experienced (he has seen many day marshals come and go), unhappily married, grumpy, worldly-wise; Tom Leathers, happy-go-lucky and largely irresponsible drifter who nevertheless likes Dan and will back him up; and the town drunk Chappie Brink, really from the respectable side of town but reduced by alcoholism to being a denizen of Race, to whom Marshal Mitchell is kind and understanding; and these three will stand up with the marshal when push comes to shove – and it does.

I can’t (obviously) reveal the ending to all this. But I can say that I found it ever-so-slightly unsatisfactory, or perhaps inappropriate. To me, it needed another, gloomier ending. But that’s probably just me.

The story is short, a slim paperback, and, I think, all the better for that. Nothing is wasted. There are no lyrical passages padding it out. It’s spare and gritty. And terrifically good.

River Bend is clearly Abilene. It even has a Drovers’ Hotel. And this was accepted explicitly in the 1946 movie version, which bore the title Abilene Town. This was a Jules Levey production – his only Western – released by United Artists. It was directed by the vastly experienced Edwin L Marin, who helmed seven Randolph Scott oaters, and equally experienced Harold Shumate adapted the Haycox novel for the screen. 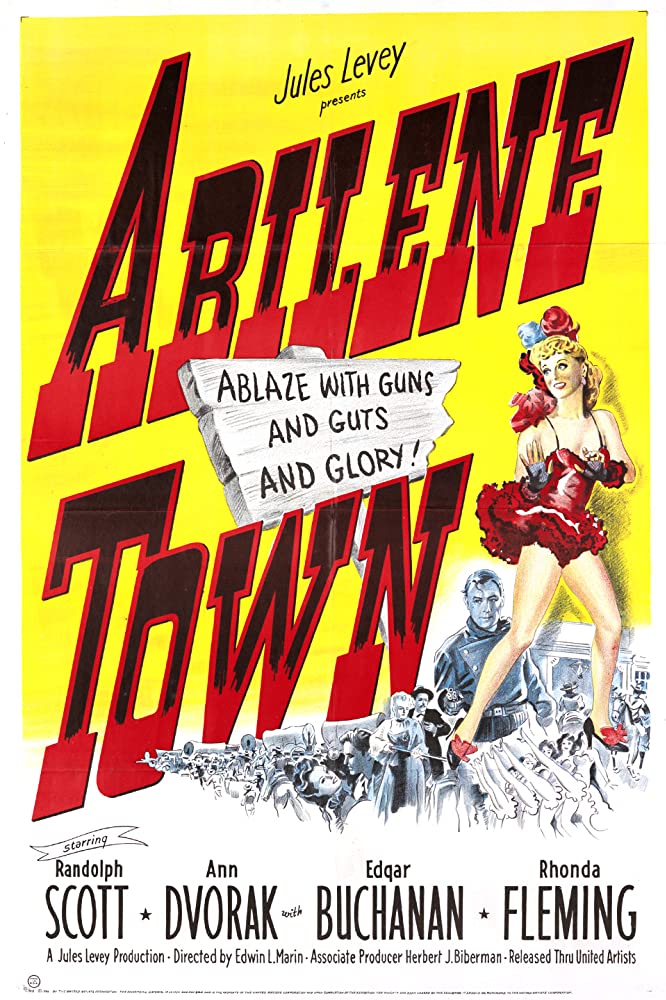 Shumate made significant changes. First, several key characters were simply written out. In the movie there is no night marshal, or Tom Leathers or town drunk. There is no romance between Rita and settler Henry. There isn’t even a Bill Bexar. Or a Ford Green. Writing out the chief villain was a bold step. And, another key change, Sherry becomes Ed Balder’s daughter; Haycox had her share Marshal Mitchell’s neutral space, a woman from out of town. Saloon girl Rita, hardly more than participant in a sub-plot for Haycox, becomes the leading lady. It’s Ann Dvorak, who did five Westerns. Sherry (Rhonda Fleming, twelve Westerns, probably the biggest of which was her part as Burt Lancaster’s love interest in Gunfight at the OK Corral) is first seen singing hymns in church alongside the marshal (none of that in the book) and she is ultra-respectable. It was traditional in Westerns to have two ladies, a rather prim and proper one and a racier saloon dame, for the hero to hover between (usually plumping at the end for the ‘good’ one). It’s actually rather neat the way the sweet singing voice of Rhonda in church morphs into the coarser one of Ann in the saloon.

Sheriff Bravo Trimble is elevated to a bigger part, and indeed becomes one of the highlights of the picture. That’s because he’s played by the great Edgar Buchanan, and because of this there is a comic edge to the character. For example, he remarks how he might go back to practicing dentistry. Buchanan had been a dentist in a former life and quite often dropped a remark of this kind in. The business of his being obsessed with winning at the card game of Fan Tan is invented and integrated. To be fair, the story probably needed a leavening of humor. Played straight, as the book, it would have been pretty grim. And Bravo’s fate is very different indeed.

But of course it’s Scott as the marshal who dominates. Abilene Town probably wasn’t the best Randolph Scott Western but he is great in it. He plays it like his Frontier Marshal of 1939, i.e. as a (mythical) Wyatt Earp figure, cleaning up the town. I love the way, when he hears shots while in church, he puts down his hymnbook and takes off his coat. Suits symbolize civilized values. To face frontier wildness, range duds are required. Gary Cooper knew this when the first thing he did when he heard Frank Miller was coming in on the noon train was take his coat off. But Scott’s marshal is clearly, as we see in the first reel in the front pew, on the side of the angels. Or the prim-and-proper types anyway. He also approves of the sturdy all-American homesteaders. He has little of Haycox’s neutrality. And although there are plenty of threats to him (it was a Western) there is little or none of Haycox’s foreboding and fatalism. His fancy nag Stardust replaces the buckskin.

We are specifically told that it’s 1870, so that makes Scott’s Marshal Mitchell Bear River Tom Smith, Wild Bill Hickok’s predecessor as marshal of Abilene. Smith was an interesting character, noted for trying to bring law ‘n’ order to the wild cattle town without guns. Unfortunately, he finished almost decapitated, so it didn’t really work. Haycox makes his hero quite unSmithlike, I’d say, more of a fatalist lawman who knows that sooner or later a bullet will have his name on it.

It was a 40s family Western so there could be no hanky-panky. At one point Randy refers to “a boarding house full of girls” and the adult audiences would have known what that meant, and at another point he tells Rita, “What you need is a ride in the hills”, but this double-entendre is delivered very flatly, straight, as if even Scott didn’t quite get it. The racy character of the saloon part of town is reduced to three songs with glitzily-costumed saloon gals dancing.

It was the Western debut of Paul Brinegar and Chubby Johnson (in bit parts).

Henry Dreiser (Lloyd Bridges) has become the leader of the settlers. We are told, “Henry Dreiser has a hundred men.” Henry is drawn to Sherry, so the book’s plot is turned upside down.

Yes, there is an action climax, and according to its lights, as a 1940s Randolph Scott Western, Abilene Town is OK. It was certainly a lot better than Scott’s previous outing in the genre, Belle of the Yukon. But it’s not top drawer, and in fact I would say the Marin-directed Scott Westerns, such as The Cariboo Trail, Canadian Pacific and Colt .45, were probably among his weaker oaters.

Bosley Crowther in The New York Times thought it OK in a limited way: “In the course of this saga Edwin L. Marin, the director, apparently a man averse to nuance, has seen to it that the action is loud and plentiful. There are no new twists. His marshal singlehandedly holds off all the hard hombres.” Crowther thought the saloon songs were “couple of ditties that are closer to Broadway than Kansas of the ‘Seventies”, which was true of course but quite normal. The critic did at least say, “Abilene Town may be cut from a familiar pattern but it is guaranteed to keep the customers awake.”

Variety thought “Randolph Scott chips in with one of his best western characterizations as the marshal”.

Abilene Town is enjoyable, really, but not a patch on the book.