.
.
A static siege Western
.
.
Cuthbert McCown (1922 – 1999) was better known to the Western-going public as Rory Calhoun. Before ‘Smoke’ (as he was known to his friends) became an actor, he worked as a boxer, a lumberjack, a truck driver and a cowpuncher. He was given a screen test by Alan Ladd’s wife, agent Sue Carol, and debuted in 1944. He was in 21 Western movies (and many TV shows), notably the Otto Preminger-directed River of No Return in 1946, in which he was third billed after Robert Mitchum  and Marilyn Monroe, and the 1955 version of The Spoilers. But mostly he did mid-budget Westerns. He co-produced Apache Territory in 1958.
.
. 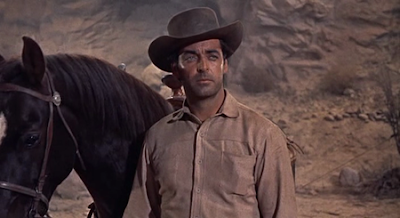 Cuthbert aka Rory
.
He stars in the movie as Logan Cates, a tough loner who knows the Apaches and their territory. The story, based on Last Stand at Papago Wells, a Louis L’Amour novel of the previous year, is a basic siege tale.
.
. 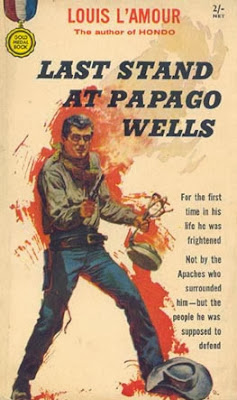 The book
.
Calhoun advises, then leads a party of whites who are surrounded by attacking Apaches. Such siege Westerns can be very static and indeed, Apache Territory is studio-bound, lacking decent Western locations. But the good news is that the group of besieged contain Leo Gordon as a demoted cavalry sergeant and John Dehner as the unworthy fiancé of Rory’s former flame.
.
. 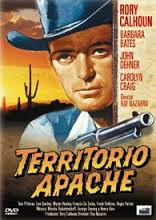 Portrait 5/10
.
Now regular readers of this blog will know that I am a bit of an aficionado of Western heavies. If you wanted smiling villain, you had to go for Lyle Bettger. If cruel badman was more your thing, then Bruce Dern was for you. Richard Boone would provide you with the perfect sour assassin. But if you wanted an out-and-out thug, it had to be old San Quentin lag Leo Gordon. In a perfect world, they would all be members of the same gang. But then, who would lead them? It is a conundrum.
John Dehner was also a very good (and rather underrated) Western actor. He was mostly in TV shows, and very good he was too, but before then, in the 1940s and 50s, he did a good number of Western movies. He reached his peak as Claude in the Gary Cooper picture Man of the West and as an excellent Pat Garrett in The Left-Handed Gun, both in 1958.
.
. 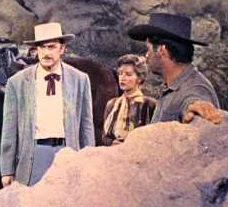 John Dehner always good
.
There had to be a gutsy girl among the besieged of course and it’s Barbara Bates, who had appeared in the Glenn Ford Western The Secret of Convict Lake in ’51 and with Dale Robertson in the 1952 remake of The Outcasts of Poker Flat. She’s OK, I guess.
.
. 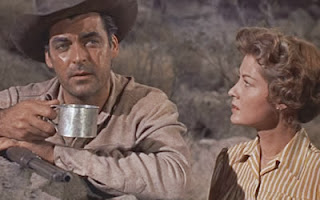 .
Logan is much more competent than anyone else (as Louis L’Amour heroes tended to be) and advises the soldiers, a bit like James Stewart in Winchester ’73. The movie is in some ways just an expansion of that short episode in Winchester. Rory is even handy with a bow and arrow and very skilled at avoiding gila monsters.
Sadly, though, the movie doesn’t fire. There is little fear or tension. As the whites are picked off one by one, you know full well that Rory and Barbara are going to get out alive. I’m afraid the script contains the lines “It’s awful quiet out there” and “It’s just a flesh wound”.
.
.
You could watch it because of Rory, Dehner and Leo.