The Deserter is a European/American collaboration Western, half spaghetti and half OK. It stars Bosnian Bekim Fehmiu as a Ramboesque guerrilla leader. It boils down to ‘Chuck Norris fights the Apaches’ (Fehmiu does look remarkably like Norris with headband and small beard hiding a weak chin).
. 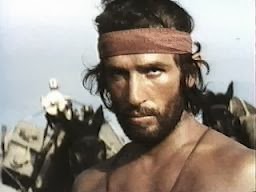 Chuck Norris Bosnian style: Bekim Fehmiu
.
General Nelson A Miles (John Huston at his crustiest) recruits Capt. Kaleb (Fehmiu), who, after his wife was killed by the Apaches, has deserted the US Cavalry to fight a Ramboesque one-man war of revenge. Given a free hand by Miles, Kaleb, Dirty Dozen-like, picks and puts through grueling training a group of tough soldiers to form his unorthodox band for a raid into Mexico to target the deadly Apache chief Mangas Durango and his fighters. You know, The Professionals.
.
.

John Huston: crusty as Nelson A Miles
.
So far, so unremarkable but I must say that apart from Fehmiu, who follows Norris as being essentially weak in the part of action hero and a poor actor, the crew he gets together are a great collection for action-movie fans. There’s Woody Strode (tomahawk fighting and bridge building), Ricardo Montalban and Slim Pickens (scouts), Chuck Connors (dynamite expert), and assorted others like Albert Salmi, Patrick Wayne, et al. There’s even Brandon De Wilde, in his last Western (he was killed in a car crash in ’72). You remember De Wilde, the boy Joey in Shane, the slightly older Joey in Night Passage and the younger brother Lonnie in Hud. They also have an English officer, Ian Bannen, who does the clipped, frightfully British, amusingly ironic but brave bit (he did it again in Bite the Bullet). Oh, and there’s also a Hondo-style dog.
.
. 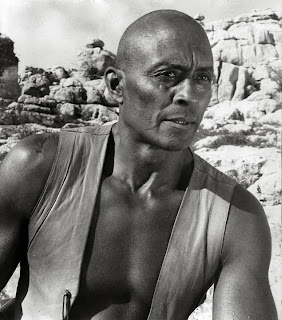 Woody repeating his Professionals role in Europe
Of course some of these survive but, in a Magnificent Seven way, others are left behind as corpses. Prepare to shed a tear, Woody fans.
It’s filmed in Spain, naturally, shot by Aldo Tonti, who the following year was to do the mighty (not) Si puo fare … amigo.  The photography is satisfactory but unremarkable. That terrain never looked convincingly American or Mexican.
.
. 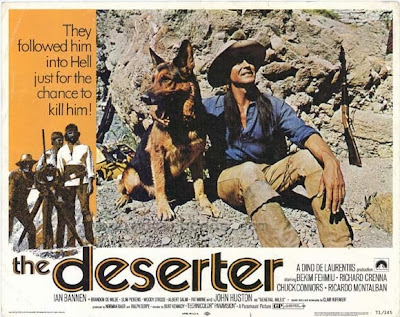 Ricardo and Hondo-style dog on poster
.
The good news, however, is that it was written by Clair Huffaker and directed by Burt Kennedy, so the whole thing is much less spaghetti than you might fear. It does have that slightly dirty, slightly cheap spag feel to it (Kennedy was always a better writer than he was a director) but the direction, writing and acting are definitely superior to the usual Italian fare of stodgy pasta.
The Apaches are out-and-out bad guys, Indians to be attacked with no modern or revisionist hang-ups. They are shot, knifed, dynamited and Gatling gunned with abandon.
.
. 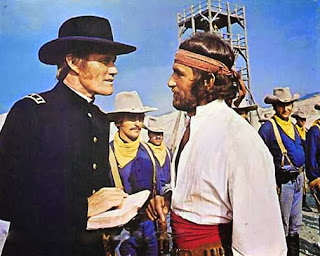 Chaplain Chuck is recruited by Chuck Norris lookalike
.
Half way through, just as Colonel Richard Crenna in the fort is saying he is against the mission, there is a blackout in the print and we cut to the mission going south with Crenna part of it, so I don’t know what happened there. This was Crenna’s first feature film Western (after some TV shows) and he became a stalwart of Europroductions, such as Catlow and The Man Called Noon. He’s OK, I guess, though most of his films weren’t.
There’s a good bit with a mule.
This is very much a boys’ movie. There aren’t any girls to slow down the action at all. Only a dead one in the first reel to spur the hero on.
.
PrevPreviousDavy Crockett, Indian Scout (UA, 1950)
NextKilloe by Louis L’AmourNext