1     The story
The short story Tennessee’s Partner by Bret Harte first appeared in the October 1869 issue of The Overland Monthly, a San Francisco magazine which Harte was editing.
It is very short, 3600 words, and succinctly told. The action takes place at Sandy Bar, a gold camp in Calaveras County, California, sometime around 1850.
It tells of a gambler and thief, Tennessee, and his rustic, almost simpleton partner, who is never named. The partner marries a (nameless) waitress in Stockton and brings his new wife back to the cabin he shares with Tennessee. Soon, however, Tennessee and the girl go off together. When Tennessee returns, sans woman (she has run off with another man) to everyone’s surprise (including that of the reader, really), Tennessee’s partner is the first to shake his hand and welcome him home. The miners, cheated of their expected gunfight are annoyed, and when Tennessee robs a stranger and shoots his way out of a saloon they determine to try to hang him.
.
. 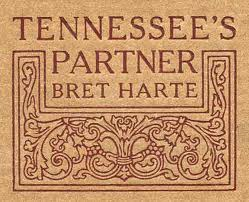 1869 short story
.
Tennessee is captured by “a small man on a gray horse” with two pistols and a knife who turns out to be the judge. At the ‘trial’, Tennessee’s partner arrives to speak for his friend but is so inarticulate that he is unable to say anything germane. He generously offers all his acquired gold to save Tennessee but the judge is affronted at what he takes to be an attempted bribe and Tennessee is sentenced to death and duly hanged from a tree by the miners.
Tennessee’s partner takes the body in his donkey cart back to the cabin where he buries his friend. He then declines in health and soon follows his pal to the grave. “And so they met”.
.
. 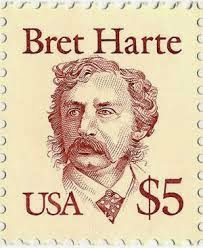 Francis Bret Harte (1836 – 1902)
.
It is almost a homosexual love affair, although of course such a relationship could only be hinted at.
Harte heard of a true story that took place in 1855. At the camp of Second Garrote, a newcomer had committed a capital crime. The miners organized a court and gave the miscreant a trial and decided to hang the culprit. But “Old Man Chaffee” stepped forward, drew a bag of gold-dust from his shirt, and said that he would give his “pile” rather than have a lynching occur in the camp. He begged the crowd to turn the prisoner over to the authorities and let the law take its course. His proposal was adopted with a cheer and the man was taken to the jail at Columbia.

Chaffee’s partner, Chamberlain, seems to have had no part in the affair; but the two were clearly united by a love similar to that of the partner for Tennessee. Long after the trial the two old men lived in their cabin, Chaffee mining and Chamberlain farming. At last, in 1903, their 54-year partnership came to an end when Chaffee died. Within eight weeks Chamberlain had followed him. 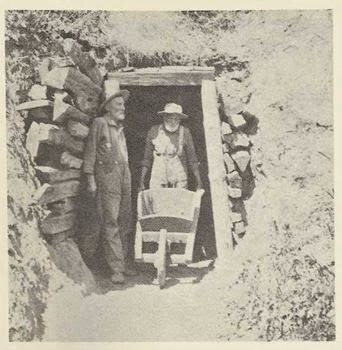 In Harte’s version, the tale is told by an outside observer whose own tone of amused irony contrasts with the homespun talk of the rough miners.

When the miners speak the language is pretty hokey:
And now, what’s the case? Here’s Tennessee wants money, wants it bad, and doesn’t like to ask it of his old pardner. Well, what does Tennessee do? He lays for a stranger, and he fetches that stranger; and you lays for him, and you fetches him; and the honors is easy. And I put it to you, bein’ a far minded man, and to you, gentlemen all, as far-minded men, ef this is isn’t so.”
Mark Twain criticized Harte (who was somewhat of a rival) for his over-quaint dialogue but that was rather the pot calling the kettle black (Twain was capable of worse on occasions).
.
. 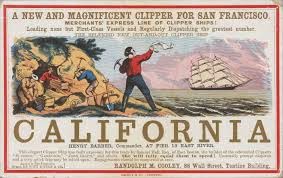 They made their own law
.
There is a certain historical basis in truth to this kind of rough-justice story. When the mining-camps, which were in a part of California that had not been settled by the Mexicans and were occupied by men who knew nothing of their system or laws, were set up, they had little or no system of law and made their own.  Each camp elected its own officers and punished lawbreakers. Theft was considered an especially heinous offense. As there were no jails, whipping and expulsion were common, but in some cases it was death. Even after the state government was organized, the law for a short while permitted a jury to prescribe the death penalty for grand larceny.
Tennessee’s Partner, the story, is in the public domain and available to read here free if you want.
2     As movie

There were three silent films inspired by Harte’s story. In 1916 Paramount released the Jesse L Lasky production Tennessee’s Pardner, directed by George Melford and starring Fannie (yup, Fannie) Ward as Tennessee. Producers Distributing Corp released The Flaming Forties in 1924, directed by Tom Forman and starring Harry Carey as Bill Jones, a kind of Tennessee. And in 1925 Paramount released The Golden Princess, directed by Clarence Badger and starring Betty Bronson, with Neil Hamilton as Tennessee.
In addition, Paddy Chayefsky’s adaptation of Alan Jay Lerner’s story in the film version of Paint Your Wagon owes a lot to Tennessee’s Partner: two close friends – one named “Pardner” – share the same woman.
In 1947, Vernon Clark was said to be producing a version of the story, starring Joel McCrea, for executive Harry Sherman. But that version was never made.
So we come to the best-known film version with RKO’s 1955 movie starring John Payne, Ronald Reagan and Rhonda Fleming, Tennessee’s Partner.
.
. 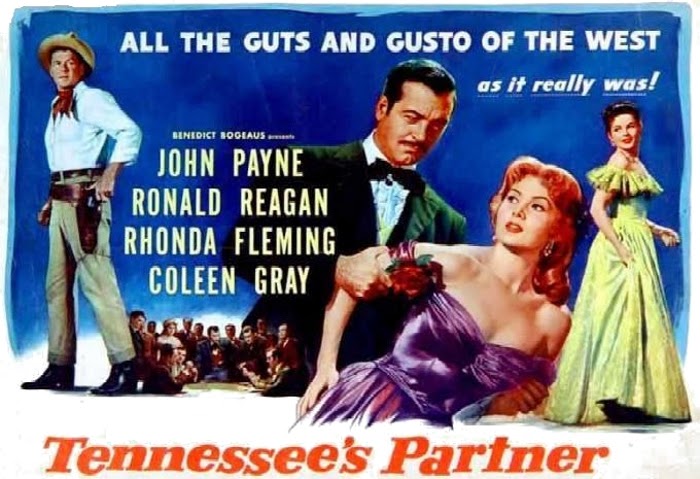 As it really was?
.
It must be said at the outset that the film version, although it boasts in the title screen that it is “Bret Harte’s Tennessee’s Partner”, is only nominally based on the story. Let’s say ‘inspired by’ rather than ‘based on’. The great DD Beauchamp (among others) worked on the screenplay.
.
. 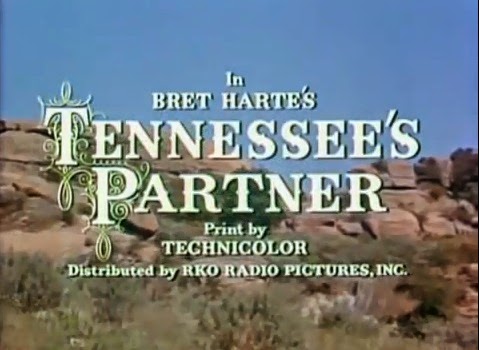 Bret Harte’s… Well, yes and no.
.
In this version frock-coated smoothie Tennessee (Payne) is partner with Duchess, the madam of a thinly-disguised bordello (beautiful Rhonda Fleming). She manages the whores and he runs the gambling. Arrogant would-be town boss Turner (Anthony Caruso as Tony Caruso) loses a fortune to Tennessee and accuses him of cheating. Turner sends a hired killer to deal with Tennessee but a simple cowpoke, named Cowpoke (Ronald Reagan), gets the drop on the killer and saves the Doc Holliday-esque gambler. Tennessee and the cowpoke become friends.
.
. 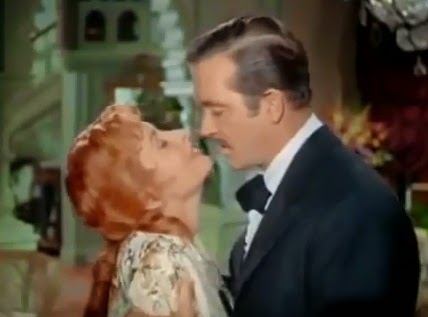 Fleming and Payne: bordello madam and slick gambler
.
Cowpoke aims to marry gold-digger Goldie Slater (Western vet Coleen Gray). To save Cowpoke, Tennessee lures Goldie to go with him to San Francisco, then puts her on a ship. Tennessee returns and there is a brutal fistfight as Reagan beats the daylights out of Payne.
.
. 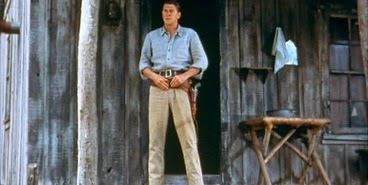 Reagan beats up Payne
.
Old-timer prospector Grubstake (good old Chubby Johnson), Tennessee’s (other) partner in a mine, is killed and the sheriff (excellent tough-guy Leo Gordon) arrests Tennessee for the murder.
.
. 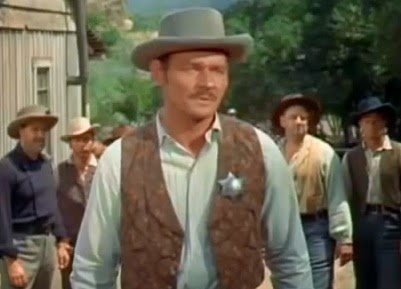 Sheriff Leo
.
The real culprit was of course Turner. There is a climactic shoot-out in which Cowpoke is killed, Tennessee looks sad and says “I didn’t even know his name”, then weds Duchess, closes up the whorehouse and sets sail with his new bride. The End.
.
. 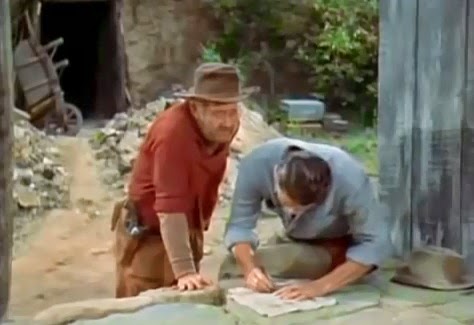 Prospector Chubby
.
That’s really quite different from Bret Harte, isn’t it.
The bordello is amazingly vulgar but is described by everyone as “classy”. Perhaps they mean opulent, for a mining camp. Payne looks a little like Karl Malden in this one, though one difference is that Payne could act. There’s a good bit where he is accused of cheating and uses a derringer, so that was good.
Morris Ankrum is the judge. A young Angie Dickinson in one of her first roles is one of the girls.
.
. 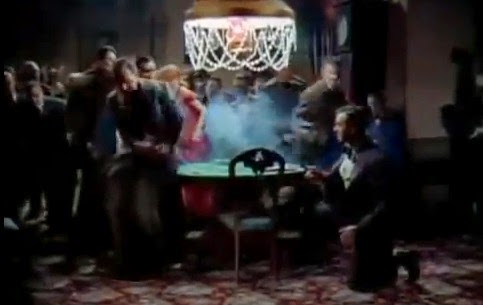 Payne defends himself with a derringer – classic gambler’s weapon

.
The film was directed by old hand Allan Dwan, who lived to be 96 and had a 52-year career. Dwan understood the Western. He should – he directed 171! But 157 of these were silent movies produced between 1911 and 1917. Then there was a long pause until the very average Tide of Empire in 1929, one of those movies on the cusp between silents and talkies. Frontier Marshal, Fox’s 1939 Wyatt Earp picture with Randolph Scott, was his first proper talkie Western and his first oater for a decade. Later he seemed to specialize in Westerns with powerful leading women such as Belle le Grand, Montana Belle, Woman They Almost Lynched and Cattle Queen of Montana. Dwan liked Payne and also directed Silver Lode.
Dwan also managed to extract one of the best performance ever from the normally rather wooden Ronald Reagan.
.
.
In the original Bret Harte story his character is described as very florid, “short and stout”. Harte writes, “his aspect under any circumstances would have been quaint, and was now even ridiculous” but Ron didn’t attempt that part.
.
. 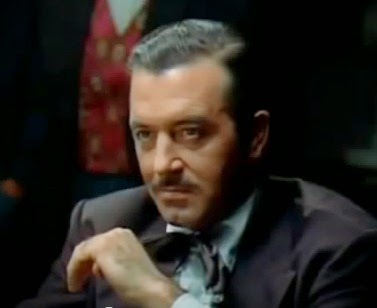 Doc Hollidayesque
.
The color film was in SuperScope, RKO’s widescreen process. Payne always shrewdly insisted that his films be in color (and kept the TV rights). It was photographed by John Alton, who did eight Westerns, including the fine Devil’s Doorway for Anthony Mann.

Essential knowledge: the film inspired one of the hits of The Four Seasons. As the character based on Bob Gaudio explains in the musical Jersey Boys, “I’m watching the million dollar movie. Some cheesy John Payne western. He hauls off and smacks Rhonda Fleming across the mouth and says, ‘What do you think of that?’ She looks up at him defiant, proud, eyes glistening – and she says, ‘Big girls don’t cry.’”
Well, well. I think Tennessee’s Partner the movie is rather better than “some cheesy John Payne western”, although I would certainly not say it’s a Western classic. Definitely watchable, though.