.
Rather good
.
.
In 1956 fame as Jim Hardie had yet to come to Dale Robertson (Tales of Wells Fargo started on NBC in March 1957) but he was nevertheless a seasoned Western performer. He had appeared in five big-screen oaters after World War II as well as a Death Valley Days episode before his first Western lead, the Delmer Daves-directed Return of the Texan in 1952 (though that was a semi-Western at most). There followed seven leading roles in oaters, including The Outcasts of Poker Flat, Sitting Bull and The Gambler from Natchez, before in 1956 he starred in the color Republic picture Dakota Incident.
Shot in Republic’s Trucolor process on location in Red Rock Canyon State Park, with Ernest Haller (who did the Anthony Mann picture Man of the West) behind the lens, the movie looks good, and comes across as superior to the average run-of-the-mill Republic Western.
.
. 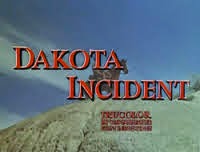 .
But its best feature is the writing. Frederick Louis Fox did the screenplay and it is thoughtful, contains some excellent lines and develops character in a way we are not used to in mid-budget Westerns. Fox had only contributed to the writing of one other oater before this (Overland Pacific, an Edward Small/United Artists flick with Jock Mahoney) and later he did mostly TV work but the script of Dakota Incident is very good. It has an authentic Western twang to it and is sometimes quite funny too. I liked it when Dale buys a horse and the liveryman asks forty dollars. Dale offers two ten dollar bills and the liveryman accepts, adding “I woulda sold it for ten”. Dale snatches one of the ten-dollar bills back and says, “You just did.” On the stage, Regis Toomey is asked where he is from and says that he has lived and traveled all over. “I’m the from-est man you ever did see.”
The film was directed by multi-talented Lewis R Foster who had directed quite a few John Payne Westerns and later did a lot of TV work, including several Tales of Wells Fargo episodes.
There’s a good cast. Top-billed Linda Farnell is Amy Clarke, some kind of singer or actress (it is never specified). She had been faintly ridiculous, over-made-up, over-the-top and trying to be a vamp, as the Mexican Chihuahua in My Darling Clementine (probably John Ford’s fault along with writers Engel and Miller; I think they were going for a Jane Russell vibe) but she had been female lead twice with Tyrone Power at Fox, in the semi-Westerns The Mark of Zorro and Brigham Young, and second to Maureen O’Hara when Joel McCrea was Buffalo Bill, so she was used to big roles in Westerns. Above all, she was absolutely superb in Two Flags West in 1950. In Dakota Incident she is beautiful, slightly world-weary, feisty, and she acts with power. 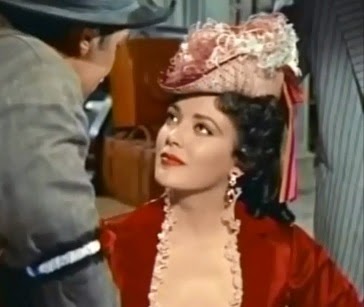 .
Early on we are shown a derringer in Amy’s purse but it never appears again, sadly, and I don’t know why it was there. Maybe to suggest a slightly louche character or show that she was capable of using firearms if the need arose.
.
. 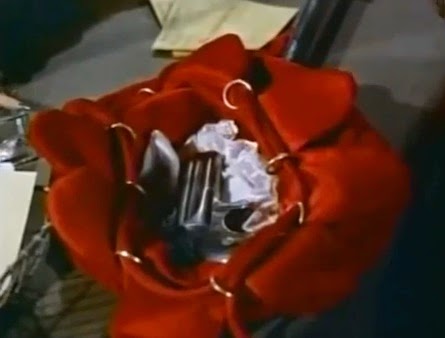 .
Robertson was a surprise. In early Westerns he was only just the right side of wooden. He came across as rather stiff and formal, though good as tough guy. In this film, though, he is a Robert Prestonish charming rogue and he loosens up noticeably, often smiling, if cynically, and coming out with the occasional wisecrack. He’s still tough, though. It’s a good performance.
.
. 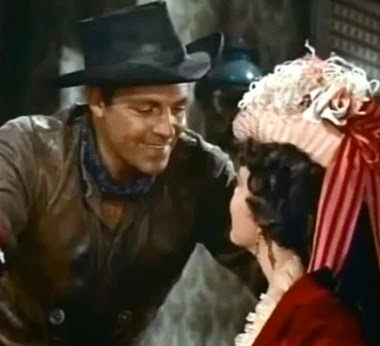 .
The couple are well supported by character actors. Ward Bond is a senator on a fact-finding trip out West. You can hear his booming voice well before he actually appears! At first rather stiff (but that’s his part: he’s supposed to be a blowhard politician), he softens as the movie progresses and in fact talks good sense throughout – but the other characters think him a fool for preaching peace with the Indians. In the end he acts with courage and self-sacrifice and is finally, posthumously, proved right. It was in fact a rather moving performance and an unexpected one – Ward Bond didn’t normally play liberal pacifists… The message delivered by the script is slightly heavy-handed, I suppose, but even in post-Broken Arrow days it was not usual for mid-50s Westerns, and worthy of praise.
.
. 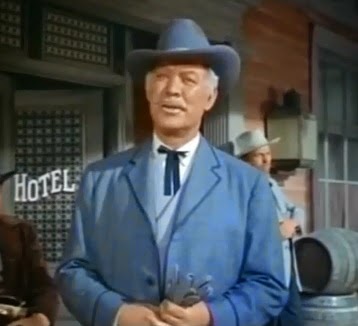 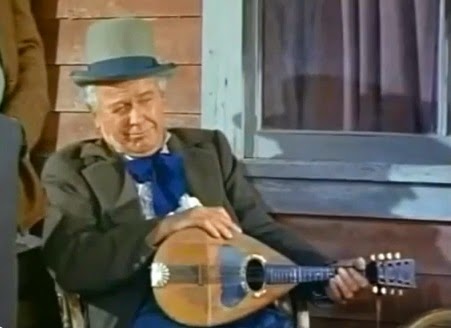 .
John Lund is also good as ‘Hamilton’, really Carter, a man wanted for a bank robbery that Dale committed and determined to bring the real culprit back to clear his name.
.
. 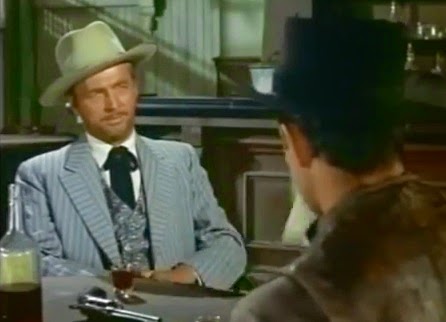 .
Early in the film John Doucette and perennial punk Skip Homeier play the badmen who double-cross Dale – in fact shoot him in the back – to share the bank loot two ways instead of three. Swine.
.
.

.
It doesn’t do them much good, not when Dale proves to have been only playing dead and then catches up with them in the town of Christian’s Flat, which, the sign says, is “a peaceful town”.
.
. 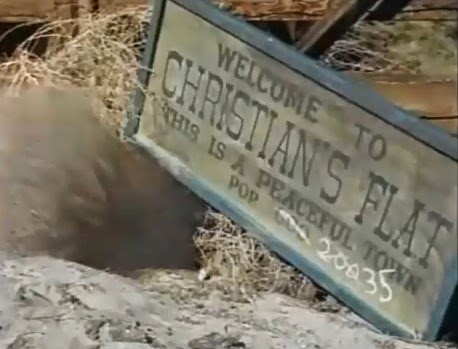 .
The middle part of the movie is a stagecoach drama, as Dale and Lund act as temporary (very temporary) driver and shotgun messenger of the ‘Mile High Stageline’ coach, on a dangerous run through Indian territory to Laramie, with Amy, Minstrel, the senator and another man inside. But there isn’t too much psychological interplay between the stage passengers and the movie more resembles the later Hombre than the earlier Stagecoach in that the stage part, while well done, is only an interlude. Really, the film becomes a siege story, as Indians attack and burn the coach and the six characters are holed up in a dry wash under a burning sun with no water, and a band of Cheyenne doing its utmost to kill them. The story was done again in 1958 in Apache Territory and was far from a new one. Siege tales can be static and talky but if well written and directed, build tension and allow good character development as ‘bad’ people show good qualities and often vice versa. Dale had done something similar in ’52 in The Outcasts of Poker Flat.
It turns out that there are only eight Indians (though the besieged don’t know that) and there are six white people. Members of both parties are picked off so the odds vary. Dale & Co get three out of the eight in the first attack but then, one by one, three of the whites are killed.
The ending is a little odd as water appears from nowhere, without explanation beyond the fact that “the big man” (God, presumably) sent it. And there’s an irony in that after almost dying of thirst, Dale nearly kills the last Indian by drowning.
The original music is rather odd. We have swirling romantic cadences at the start under galloping desperate men, escaping bank robbers. It doesn’t fit at all. It was by one R Dale Butts, who wrote for no fewer than 152 big- and small-screen Westerns.
I don’t want to overdo this; Dakota Incident is no great Western. But it is much better than many and definitely worth a watch.