.
A 1930s Lone Star programmer comes back to life
.
.
It’s great that they are still making Westerns. The genre has been described as on the point of death for so long that we have become used to it, but the cowboy film never actually falls down shot and dies. There’s life in the old dog yet. There seems to be a market for new oaters, not just for sad old guys like Jeff watching the Movies4Men channel but also on more mainstream outlets and straight-to-video. They could still do more: Netflix (my version anyway) is sadly deficient in the genre. But Westerns are still appearing: joy to the world, etc.
Remakes have always been a key part of Western movie-making, of course. The fiftieth anniversary remake of 3:10 to Yuma was a glowing example. Remakes are rarely better than the original but they are often a homage to it. But who would have thought they would remake a corny 1930s Lone Star programmer, one of the many John Wayne starred in for Monogram in that bleak decade between success in Raoul Walsh’s The Big Trail and John Ford’s Stagecoach? These pictures were formulaic, if fun, and basically kiddy fodder (though some of the kids were of advanced years).
.
. 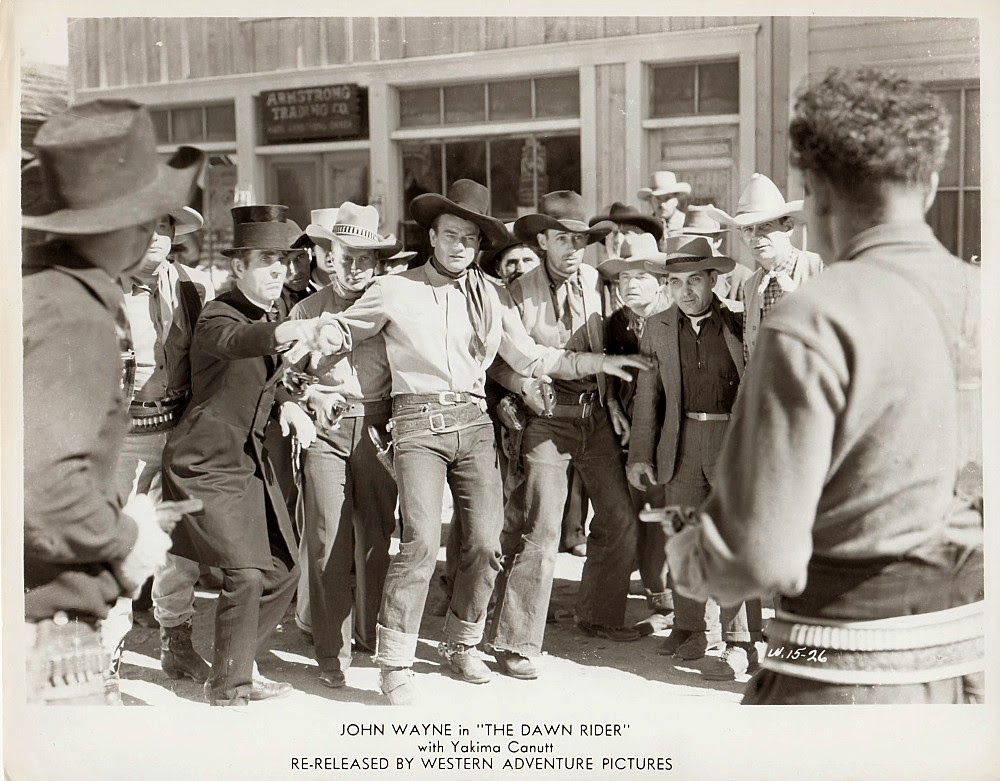 Posed, nous?
.
Directed by skilled RN Bradbury, with second unit direction by stuntmeister Yakima Canutt (who also played the crooked saloon owner), and shot by craftsman Archie Stout (one of Ford’s preferred cinematographers), these short pictures were, despite the low budget and minor studio, quality items. And yes, maybe The Dawn Rider (the 30s version had a definite article) was one of the best of them. Read our review, or better yet, watch it.

Anyway, a couple of years ago producer/writer Joseph Nasser decided to do his version of that little programmer.
.
. 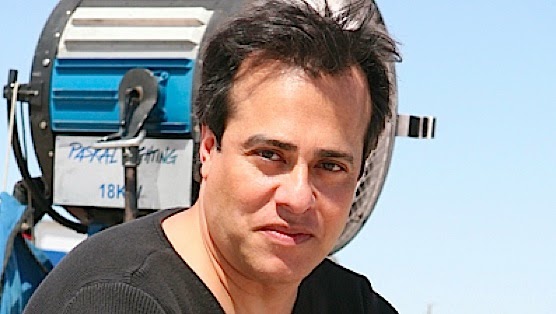 J Nasser
.
He got Terry Miles to direct it. Mr Miles has been four times nominated for a Leo award (I’m not quite sure what that is but it sounds impressive), though this is his only Western. Miles is a Canadian, and maybe Nasser too, who knows. At any rate the movie was filmed in British Columbia and features Donald Sutherland, as well as many other Canadian actors, so it’s a pretty Canadian affair. Not that I hold that against it, you understand.
.
. 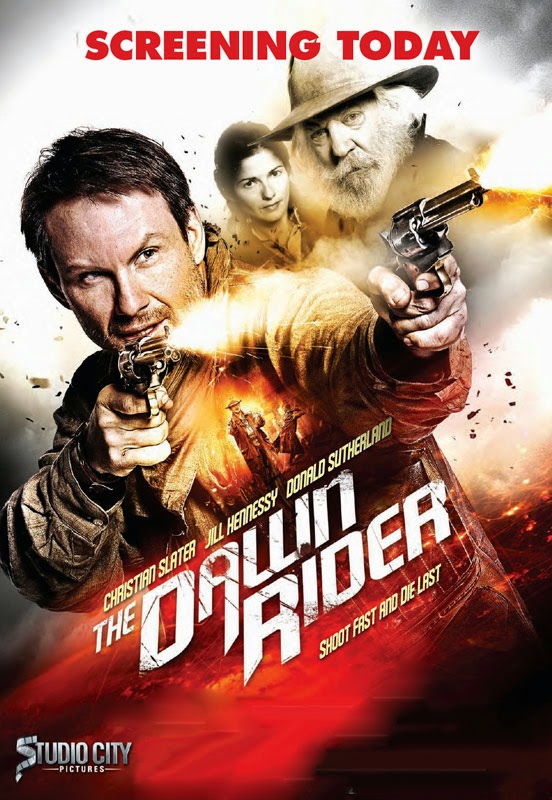 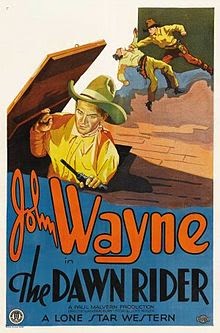 Original, 1935
.
It opens with some nice sepia shots (DP Norm Li) and not a bad song (George Canyon, great name) – a lot better than most ballads under Western titles anyway. It’s set in Dakota Territory in 1883, then places called Sasparilla, WY and Grey Falls, MT. It opens with the hero pissing, which isn’t too elegant, but there we are. Probably supposed to set the tone. No one would have pissed in the John Wayne version, not even a horse, but then the heroine wouldn’t have drunk whiskey, said fuck or shot people either. That’s 2012 for you.
Sutherland is bent on revenge for something or other but he has a badge so is a bit difficult to kill. He has a majestic white mane and imposing corporation. 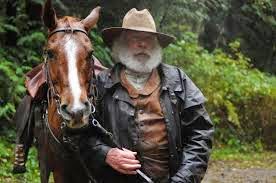 Mane
.
Christian Slater has the Duke part of John Mason (Wayne was always John something in these films; this time, Mason). Mr Slater (Dave Rudabaugh in Young Guns II) has those odd eyes but he does the tough-guy act quite well. There’s a running gag about ‘Cincinnati John Mason’, though he always declares he has never been to Ohio. He pals up with Ben McClure (Ben Cotton, a Canadian from Battlestar Galactica, in the Reed Howes part), though Christian and Ben are rivals for the hand of the fair Alice (Jill Hennessy, in her only Western, taking the baton from Wayne steady Marion Burns). Ben helps out Mason’s dad, named Dad Mason, at the express office. Kenneth Yank takes the Joe de Grasse Dad Mason/Mason dad part. The express office is robbed and dad Dad is killed by a gang of bandits in rather Djangoish hoods. So John will want to catch those skunks. How we love the revenge-the-dead-dad plot.
Mr Nasser comes up with some familiar dialogue. When suffering a gunshot wound, the hero declares that “it’s just a scratch.” He could have said it was “only a flesh wound”.
Wayne’s Mason was usually a secret agent of some kind. This Mason was, we are told, a lawman in Dodge, a Texas Ranger, a Pinkerton agent out of the New York office and had got out of a Mexican jail by cutting cards, so he’d sure got around.
The heroine is appropriately feisty for 2012, no shrinking violet she, and where in the past she might have had a little purse gun, she pulls a great Colt on a heavy wanting to have sex with her and declares “It ain’t no fucking derringer.”
.
.

It ain’t no **** derringer
.
Tragically, though, the great Earl Dwire, my hero, has not been replaced in this version as ‘Pete – Expressman’. They probably thought the Dwire act was too hard to follow.
It is no surprise that the gang boss (the Dennis Moore part) turns out to be the heroine’s sis, nor that the actor who plays him (Lochlyn Munro) is Canadian.
Well, it all comes right in the end and John manages to kill the bad guys, escape arrest, become the marshal and get the girl. Sorry if that was a spoiler. But you’ve seen the ’35 version anyway.
It isn’t clear why it’s named The Dawn Rider, but then no one rode at dawn in 1935 either.
I’ve seen worse. And they deserve an award (maybe a Leo) for making a Western at all.
.
PrevPreviousTall in the Saddle (RKO, 1944)
NextThey Rode West (Columbia, 1954)Next

PrevPreviousTall in the Saddle (RKO, 1944)
NextThey Rode West (Columbia, 1954)Next
Jeff Arnold © 2022 – All rights reserved – Designed by BetterCallChris
Scroll Up