.
Middle of the trail
.
.
They Rode West is a rather dreary oater from the mid-1950s, with an unstellar cast and a slightly wishy-washy ‘liberal’ agenda.
It isn’t that bad. For one thing it’s got some nice Technicolor cinematography by Charles Lawton Jr of Simi Hills, California locations.
It was directed by Phil Karlson, who graduated from working in a menial capacity on Bowery Boys and Charlie Chan films to the dizzy heights of being assistant director on Abbott and Costello movies but made his mark in the 50s with a series of gritty crime dramas. In the 60s he made those awful Matt Helm pictures with Dean Martin. But Westernwise he had a reasonable track (or trail) record. He had been second unit director on two of the best Tom Mix oaters, Destry Rides Again and My Pal, the King, and his first Westerns as director were two in the epic year of 1948 I so often blather on about. Admittedly they were forgettable B-Westerns (Thunderhoof and a very free rendition of RL Stevenson’s Silverado, Adventures in Silverado) but still. He did a Fenimore Cooper picture, The Iroquois Trail, with George Montgomery in 1950 and the fun The Texas Rangers in ’51, again with Montgomery as star. Probably his best Western was Gunman’s Walk in 1958 with Van Heflin and Tab Hunter.
.
. 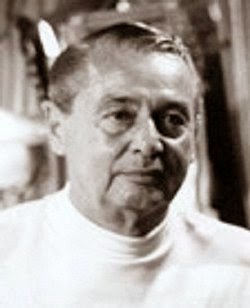 Phil Karlson
.
The main trouble with They Rode West was the writing and the cast. DeVallon Scott had worked on the Big Sky but was really a TV writer. The screenplay is also credited to Frank S Nugent. Now Nugent had worked a lot for John Ford so he should have known his onions. But he turned out a stodgy script for They Rode West with little zip or fire.
As for the actors, well, the star was Robert Francis. It’s not Francis’s fault that he is little known: he was only in four movies before being killed in an air crash. He was clean-cut and handsome in a 50s way, but a bit on the bland side as an actor. Opposite him was Donna Reed, who the year before had been Rock Hudson’s love interest in Columbia’s Gun Fury. She’s alright, I guess.
.
. 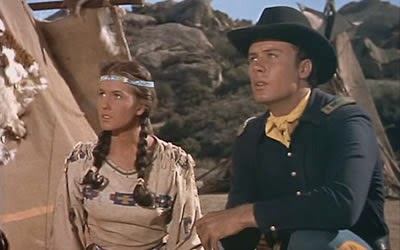 Indian maid fancies the young doc but he has eyes for Donna
.
It’s the story of a young Army doctor (it’s a cavalry Western) who disobeys orders to treat Satanta’s Kiowa people who are suffering from malaria. Satanta is played by Stuart Randall in make-up. You remember Stuart Randall: Sheriff Corey in Laramie. Satanta is one of those dignified Cochise-type statesmanlike Indian chiefs that so many post-Broken Arrow movies had gotten us used to.
.
. 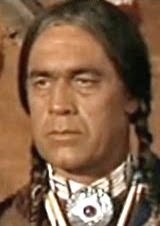 Sheriff Corey as Satanta
.
The Kiowas are the goodies and the Comanche are the baddies, but thanks to dumb, insensitive, martinet Army commanders (Philip Carey and Onslow Stevens) the two Indian tribes band together and then watch out. It’s all historical hooey of course but that was par for the course for 1950s Westerns. Carey was often quite good in Westerns – he was excellent as the villain in Gun Fury, for example – but he isn’t good in this one, probably becausqe of the clunky script. 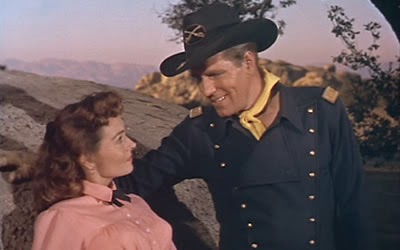 Phil romances Donna (unsuccessfully – she’s after the young doc)
.
There are the obligatory two dames for the hero to choose between. La Reed, an Army gal, and the standard demure Indian maid, Manyi-ten (May Wynn) who was a white girl taken as a child who now considers herself an Indian and Satanta’s daughter. Or something. Both girls look misty-eyed when Dr Francis is in the offing but there is never much doubt about which lady he’ll finally go for because he often remarks about “his own kind” and I think the idea of marrying an Indian, be she ever so cracking, is repugnant. The doc dislikes the racist Army men and considers Indians members of the human race, curing them, but actually marrying one, that would be step too far.
It may be a 50s liberal script but it isn’t that liberal. Heaven forfend.
.
. 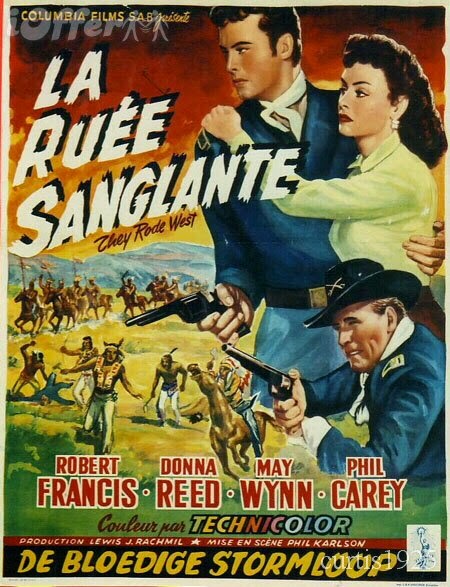 A bit bland
.
There’s one of those wooden toy forts they liked. Jack Kelly is a young Lt. and James Best another. There’s the clichéd Irish sergeant-major fond of a drop (Roy Roberts). In fact a lot of it is sub-Ford (very sub-Ford) cavalry Western fare. Just not very well written, directed or acted.