Rory Calhoun Westerns are rarely  great classics of the genre, though some are durn good, but they are all worth a watch. Smoke, as he was known, had been a cowpuncher, among other trades, in his youth and knew something of the West. Given a screen test at Fox by Alan Ladd’s wife, who saw him riding, he debuted as Frank McGown but David O Selznick changed his name to Rory Calhoun. His first part in an oater was with Guy Madison in Massacre River in 1949 and there followed Sand, A Ticket to Tomahawk and four more oaters before he hit the big time third-billed after Robert Mitchum and Marilyn Monroe in River of No Return in 1954. Four Guns was his eleventh Western. He was in thirty all told and very many TV shows; in particular, he was The Texan on CBS for two seasons, 1958 – 60. So it was quite a Western career. When I was young I was never an out-and-out Rory fan. He always looked a bit slick somehow and too modern (1950s). But as I aged (and boy, how I’ve aged) I have come to appreciate him in Westerns more and more. He wasn’t quite Randolph Scott or Joel McCrea or anything but he was certainly in the George Montgomery/Rod Cameron class, and maybe the best of them. The Western before this one, Dawn at Socorro, was absolutely superb and Rory was outstanding in it as a Doc Holliday-ish tragic gunman. And Four Guns was a worthy follow-up.
.
. Rory Calhoun as Western tough guy. He almost convinces.
Universal in the 1950s, as we know well, did a lot of Westerns and threw some budget at them too. Think of all those Audie Murphy pictures, with decent directors and good photography of attractive Western locations in Technicolor. OK, they were rather formulaic but that was a characteristic of Westerns. One is fond of the conventions. And each one is slightly different anyway. Four Guns to the Border was rather a typical example. It was directed by ex-actor Richard Carlson, who had had a medium-sized part in Seminole with Rock Hudson the year before; this was his first Western as director. He later starred in Mackenzie’s Raiders on TV, you may remember, and worked, as actor or director, on many other TV Westerns.  He made a good fist of Four Guns and the movie gallops along.
.
. Actor-director Carlson did a lot of Westerns
.
One of the great things about Four Guns is the casting. The four in question are a band of (not very good) bank robbers headed by Rory, and the other three are George Nader, Jay Silverheels and John McIntire. That’s a pretty good gang. Not so much Nader: he had become famous the year before in the 3D thriller Robot Monster (a classic junker) and was a bit of a beefcake star. He didn’t do many Westerns, only four and a couple of Laramie episodes, but he was quite well known at the time. However, with McIntire and Silverheels in your gang you were well on the trail to exciting shoot-‘em-ups.
.
. 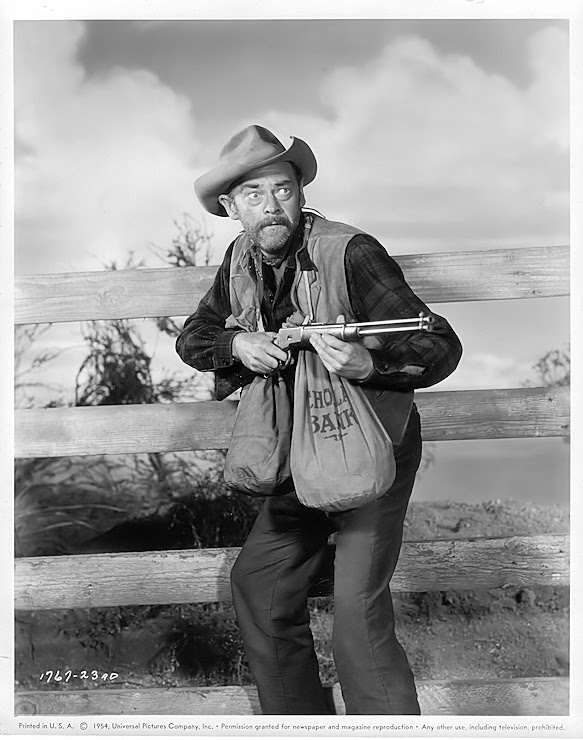 .
For me John McIntire was always best as a cranky doc (think The Tin Star or The Gunfight at Dodge City) but he had a good sideline in tough range riders. Al Sieberish old Indian scout (Ambush) or indeed even Al Sieber himself (Apache), ruthless rancher (Stranger on Horseback), hard Army officer (War Arrow, Two Rode Together), Elvis’s homesteader dad in Flaming Star, terrific villain in Backlash, even more splendid hoodlum-judge in The Far Country, whatever you needed in a Western, John McIntire could do it for you, and really well too. All this before he bossed any wagon train (though come to think of it, he did that too, in Westward the Women).

As for Jay Silverheels, Tonto also did a whole heap of Western movies, in which he was often very good. He made quite a specialty of playing Geronimo (Broken Arrow, The Battle at Apache Pass, Walk the Proud Land) but also rode along in many guises, often an Indian of course, from Kit Carson in 1940 right through to The Man Who Loved Cat Dancing in 1973. I always like to see his name in the cast. In Four Guns he is very dashing as badman in a bright green headscarf, and he is really nice to a litter of kittens, so obviously a goodie at heart.
.
. Nice 50s poster
.
And then Walter Brennan (1894 – 1974) is old Simon Bhumer, the pop of lusted-after tomboy Lolly (Colleen Miller, Tony Curtis’s squeeze Zoe in The Rawhide Years). Mr Brennan made 114 Western appearances on the big and small screen, from being a stuntman/extra in the Hoot Gibson silent The Calgary Stampede in 1925 right through to Smoke in the Wind, directed by his son Andy in 1975. He was often the crusty old sidekick, of course, many times with John Wayne, and hardly ever the villain – a pity really as he was splendid as Old Man Clanton in My Darling Clementine. It may surprise you to know that Brennan was the first actor to accumulate three Academy Awards and to date he is still the only actor to win three Oscars as Best Supporting Actor. In Four Guns he is very protective of his girl, what with all those Indians around as well as handsome badmen. “She ain’t gonna marry no gunslinger,” he warns them, though Colleen sharply retorts that her mother did. Colleen shows quite a daring amount of leg for 1954 and appears in a sensational wet-nightgown scene.
.
. Colleen Miller as Lolly and Walter Brennan as her pop
.
We’ve also got Charles Drake as the sheriff (he and Rory ‘go back’) and Nestor Paiva as the café owner, Greasy. New Mexican Paul Brinegar (you know, Wishbone) is the barber. It’s a good cast alright.
There’s lovely Apple Valley scenery as they ride through dangerous but beautiful Apache lands (1881 New Mexico), photographed by the great Russell Metty in Technicolor.
George van Marter and Franklin Coen wrote it up from a Louis L’Amour story, and there some good lines.
It’s a classic tale of badmen doing the right thing in the end and as such is really not much out of the ordinary but the locations and casting make this Western a notch above the usual run-of-the-mill oater and I recommend a look at it if it comes on TV.