.
Pretty trashy
.
.
Columbia’s late-60s The Desperados, not to be confused with their enjoyable 1943 Randolph Scott/Claire Trevor oater The Desperadoes, is a pretty trashy affair. Where the 1940s picture was energetic and fun, the 60s one is a spaghetti-influenced nonentity. In 1943 there was a Max Brand story, directing by Charles Vidor and supporting the principals in the cast were Glenn Ford, Edgar Buchanan and Guinn ‘Big Boy’ Williams. In the 1969 movie there were only Dr Ben Casey (Vince Edwards) and Londoner Sylvia Syms. Neville Brand as the marshal and Jack Palance as the guerrilla leader couldn’t do anything to save it: they both act badly and they both have dreadful lines The director was rom-com specialist Henry Levin (though to be fair Levin did make The Lonely Man with Palance in ’57). The screenplay was by Walter Brough and it was his only Western movie; you can see why.
.
. 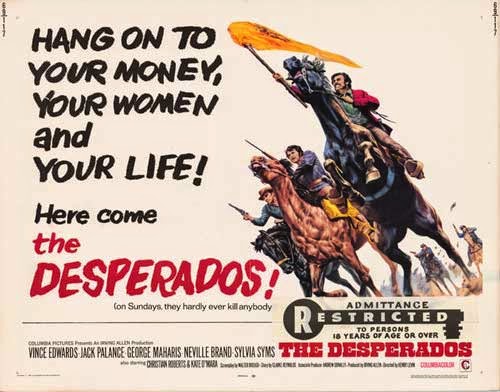 Fine if you like junk
.
It’s the Civil War or just after. Parson Josiah Galt (Palance) in a Confederate uniform rides on St. Thomas, in a mountainous Kansas (it’s actually Almeria) and lays waste to it using his 1870s Colts. Brave son Davy, in stick-on Elvis sideburns, doesn’t approve of pillaging. He retires to a ranch in Texas, Spain with a wife (Syms) and son (la Syms’s real son) and tries to lead a decent life. But there’s a guerrilla raid on his town which makes Northfield look like a church social. Many stuntmen fall from roofs. Davy’s past has come back to haunt him, you know how it does.
.
. 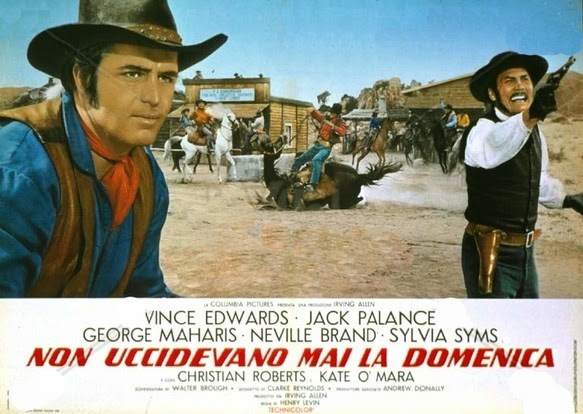 I would call it a sub-spaghetti but how can anything be worse than a spaghetti?
.
Palance overacts, as he was wont to do, especially in his later career, and Edwards and Syms weren’t exactly Oscar contenders either. Palance looks about the same age as his son. Very overweight Neville Brand says his (clunky) lines dutifully but really… George Maharis from Route 66 is another Galt son. There’s a train and an inappropriate helicopter shot. There’s a stupid echo. At the end the protagonists fall to their death and really, it’s just as well.
.
. 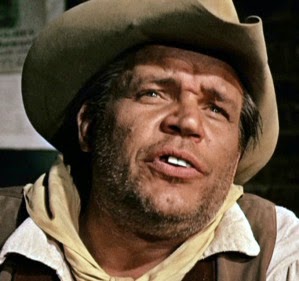 Neville Brand. Not his finest hour.
.
The print is poor, and the horses are often blue. There are fades-to-black which speak of a TV provenance. It was an American-British co-production, which is why unsuitable Brit actors are in it. I urge you, dear e-readers, to give this one a miss, and not even a near miss. 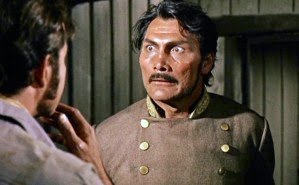