.
The TV Western comes of age
.
.
In the early 1980s, when the Titanic-like Heaven’s Gate had almost sunk the Western movie single-handed and big-screen oaters were a rarity indeed (until the excellent Silverado and Pale Rider wonderful resuscitated what had seemed a corpse, praise be to you Messrs. Kasdan and Eastwood), it seemed that TV would assume the mantle.
Western TV shows had been a vital part of the growing up of my generation and we were entirely gripped by them but looking at many of them now, the ones that survive of the 1950s and 60s, we must admit that they were pretty small-scope affairs. Oh, many had real quality of writing, direction and acting but they were usually studio-bound and limited by the small screen, in black & white, thirty minutes long if that, shot on often rudimentary and unconvincing sets and, worse, even more constrained by the ‘respectable’ (i.e. rigidly bourgeois) values of the time than big-screen offerings were.
TV Westerns became, of course, almost epic offerings in the late 1980s, when Loneseome Dove, Dove spin-off prequels and sequels and then, through the 90s other excellent mini-series and films, paradoxically brought back to Westerns the budget, location-shooting and wide-open spaces that the genre so often needs. Big color TVs helped. And these TV films could be long. Put another way, they brought back scope.
In a way, NBC’s The Sacketts, a 1979 working-up of the Louis L’Amour novels, and CBS’s subsequent The Shadow Riders, also L’Amour-based and also using Sam Elliott, Tom Selleck and Jeff Osterhage (and Ben Johnson), were a pioneer of this trend. And all credit to them.
.
. 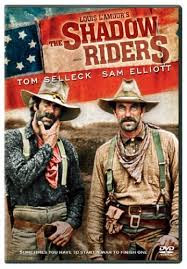 Have a look
.
Jeff Osterhage faded away, as far as Westerns are concerned, afterwards, and The Sacketts and The Shadow Riders were his only serious contribution to the genre, but the two TV movies fixed the place of Elliott and Selleck (Johnson’s needed no such adhesive) in the Pantheon of Western fame. Elliott had in fact started along the long trail to Western stardom in 1969 in a small part (“Card player #2”) in Butch Cassidy and the Sundance Kid (on the set with his future wife, female lead – and future Shadow Riders co-star – Katharine Ross). Later, Elliott was Conagher in 1991 (also with Ross), General Buford in Gettysburg (1993) and Wild Bill Hickok in Buffalo Girls in 1995. Of course, on the bigger screen he was Virgil Earp in Tombstone, not to mention the cowboy angel in The Big Lebowski. But that craggy face and handlebar mustache, immediately recognizable, belonged to the quintessential 1980s and 90s Western TV actor.
.
. 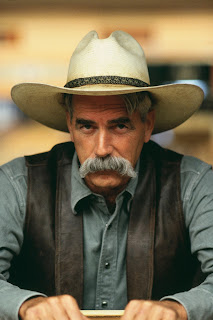 Sam Elliott
.
As for Selleck, he’d been acting since the late 1960s but in the pre-Magnum days he was hardly known. The Sacketts was also (apart from one episode of Lancer) his first appearance in a Western. But The Sacketts was a big success and he really looked the part. In fact he developed a Selleck Western look; the costumes seemed to suit him and he had the air of a classic tough, taciturn cowboy. Later, of course, Selleck was Quigley Down Under (standing in for a sick Steve McQueen) and then he became a producer as well as actor: the contemporary rodeo TV movie Ruby Jean and Joe (1995) was followed by TV adaptations of stories by Elmore Leonard, Louis L’Amour (again) and Jack Schaefer – class acts all – Last Stand at Saber River (1997), Crossfire Trail (2001) and Monte Walsh (2003). So now, as Magnum fades from our memories, and even from the TV screens, we think of Mr Selleck mostly in terms of the saddle. And rightly so, for he is very convincing there.
Robert Totten had directed The Sacketts but three years later it was Andrew V McLaglen at the helm. McLaglen was not one of my favorite directors (I think his feature Westerns were generally pretty weak) but he was certainly competent and experienced as far as the small-screen oater went.You don’t direct all those dozens and dozens of episodes of Have Gun – Will Travel and Gunsmoke without knowing a thing or two about the TV Western.

Jim Byrnes and (uncredited) Verne Nobles adapted the Louis L’Amour. Byrnes was an old hand in the world of the TV Western and worked on The Sacketts, those Kenny Rogers Gambler efforts, episodes of Gunsmoke and many others. Nobles had not done any Westerns and in fact this and another later L’Amour tale (Shaughnessy, 1996) were his only contributions to the genre.
.
. 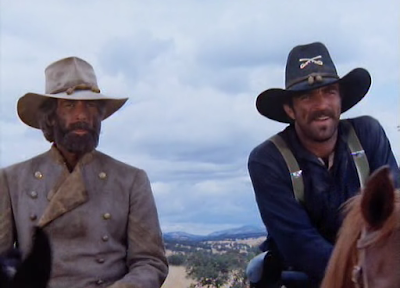 The brothers come back from the war
.
Jack Whitman was the DP, as on The Sacketts, and had the pleasure of some nice California locations: Columbia State Historic Park, Santa Cruz and Sonora.
As for the cast, as well as Elliott, Selleck and Osterhage as three brothers (again) the producers created a nice part as a scurrilous uncle for Ben Johnson, and a lesser role for Harry Carey Jr as his brother, the boys’ pa. Very nice. And not only that: RG Armstrong plays the sheriff – one of the finest Western character actors of all time. Katharine Ross takes the part of Sam’s fiancée (though when she thought he had been killed in the war she said yes to a boring rancher; she soon sees the error of her ways and welcomes Sam back to her bosom when he daringly rescues her from a fate worse than death with the aid of Tom and Jeff). La Ross had, of course, had been big box-office since The Graduate and Butch Cassidy and Westernwise she’d also been Ann in Shenandoah and with Robert Redford again in Tell Them Willie Boy is Here.
.
. 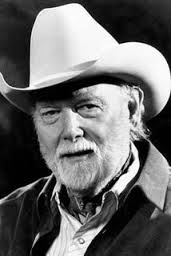 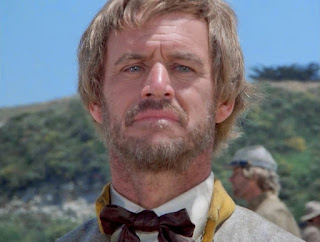 Geoffrey Lewis
.
There’s lots of action, especially in the last reel (if TV movies have reels), with mucho shooting and Sam and Tom running along the top of a train and rescuing maidens.
It’s still today a lot of fun and well worth a watch and, as I said earlier, in its limited way it is quite a landmark in the history of the genre. 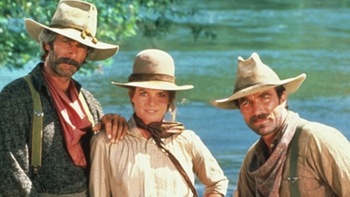 Katharine Ross between Sam and Tom