Not the best Audie oater
.

As Audie Murphy’s contract with Universal came to an end in 1963, and before he started making Westerns for Columbia in ‘64, he appeared in a single oater for Allied Artists. It wasn’t very good. Universal and Columbia Westerns may not have been huge-budget A-movies with megastars but they were decently done, with competent directors and writers, and good cinematography of appropriate and attractive locations. Allied Artists grew out of low-budget studios Monogram, and while they did allot higher budgets than they had to their black & white Monogram movies, the results were hardly great artistic creations or even box-office draws. This one is at least shot in Panavision with color by De Luxe, by Joe Biroc, no less, so that’s something. But the direction and writing was pretty ordinary and the actors, apart from Audie, dlightly in the minor league.
.
. 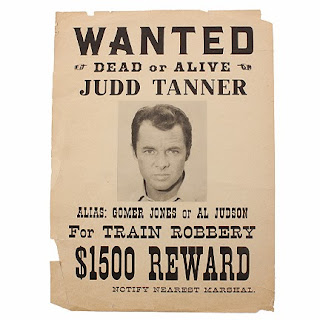 What? Audie wanted? That can’t be right surely?
.
The biggest weakness of the movie is that it can’t decide whether to be a detective story or a Western. It was in fact a straight (but unacknowledged) remake of AA’s 1957 George Montgomery picture Last of the Badmen. That was written by David Chantler and Daniel B Ullman but the 1963 effort is credited to Edward Bernds, with no mention of the Chantler/Ullman story. Bernds once received an Oscar nomination but it was a mistake. The academy got the wrong film. He still had the nomination framed and displayed it proudly. He had first written (and directed) a Western in 1945, the masterly epic (not) Pistol Packin’ Nitwits, a film you are doubtless desperate to see, and other Z-Westerns followed. His greatest triumph was probably the co-writing of the Elvis movie Tickle Me. How he got the job of doing the screenplay for Comanche Creek is a mystery.
The direction was similarly uninspired. Frank McDonald has been described as “not entirely comfortable as a director.” Evelyn Keyes once said, “I’ve never seen anyone as terrified of directing as Frank McDonald”. McDonald churned out many a Roy Rogers and Gene Autry oater, and later wagonloads of Western TV shows, and in fact is credited with working on over 300 Westerns of one kind or another. But he wasn’t very good. This movie is stodgy, and it lacks pace and tension.
.
. 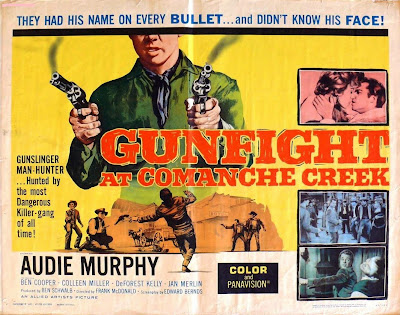 Plodding
.
The film copied from the George Montgomery one an annoying narrative voiceover (by Reed Hadley) designed, one supposes, to give it an Untouchables-ish crime drama-documentary tinge. It fails, because the plot is so utterly preposterous that it could never possibly have actually happened in real life. The commentary is annoying because it’s so pointless; it’s perfectly clear from the action what’s happening and you’d have to be a moron to need the voiceover. Which perhaps some of the original audience were, but I reckon not. The AA producers, however…
It’s the story of the ‘National Detective Agency’ operatives Audie, Jan Merlin and John Milford. They have the mission of infiltrating a gang led by evil DeForest Kelley. The MO of this gang is a bit bizarre: they bust criminals out of jail, use them as fronts to rob banks so that the reward on their heads goes up, then murder them and claim the reward money. It would have been a lot easier to just rob the banks.
Audie pretends to be a crook and gets himself arrested, waiting for the gang to break him out, which they duly do. They make him rob a bank, sans mask, armed only with a derringer. And an empty derringer at that. Audie with a derringer! Derringers were for saloon gals, gamblers and ne’er-do-wells. Still, it doesn’t count as he was forced to use it, and anyway it was unloaded.
Audie is first seen canoodling with a girl and plays it throughout with a cynical smile and devil-may-care insouciance, which doesn’t quite come off.
DeForest Kelley is only the ramrod of the robbers, it turns out. There is, in town, a shadowy figure masterminding the gang. If you have a mental age in single figures you might not guess who it is, but everyone else will know very early on.
.
. 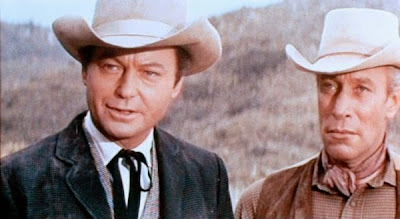 Bones in a Stetson
.
Most people can only think of Bones on the Enterprise when they see Mr Kelley but actually he appeared in a great number of Western TV shows from 1949 onwards and the occasional big-screen oater (he was Morgan Earp in Gunfight at the OK Corral and Curley in Warlock). As for Jan Merlin, it’s unusual to see him numbered among the goodies (in fact he sacrifices himself to save Audie which was pretty noble). Most people will think of him as Lt. Colin Kirby in The Rough Riders. Ben Cooper, as the badman Carter whom Audie ‘turns’, had been Turkey in Johnny Guitar, and Adam Williams as the fellow gang member Hayden was in a lot of Western TV shows at one time or another. But really none of these was what you would call a top-drawer Western character actor.
Audie wears no hat throughout and for 99% of the movie doesn’t have a gun, so that’s unusual.
There is some love interest (Colleen Miller as a saloon gal and Susan Seaforth as a farmer’s daughter) but the only accurate word to describe it would be perfunctory.
The shoot out of the title in the main street in the last reel isn’t too bad but really this must be considered one of the weakest of Audie’s Westerns, if not the worst.