Irving Allen was a producer best known for disagreeing with his partner Albert Broccoli on the commercial viability of James Bond movies (doh) and doing Matt Helm pictures instead. Occasionally, and unfortunately, he also directed films, though fortunately Slaughter Trail was his only Western as director. He produced three other oaters, all dire: New Mexico, The Hellions and the awful Jack Palance picture The Desperados. Slaughter Trail is very, very bad.
.
. 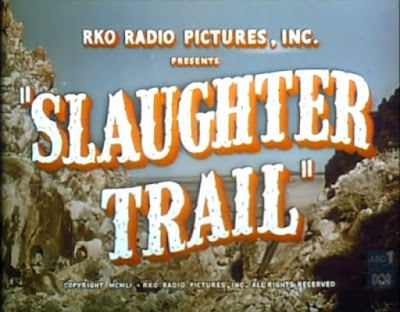 I wouldn’t bother if I were you
.
It’s a sort of cavalry Western, set largely in a fort, in New Mexico in 1882. Brian Donlevy is the captain, and the nearest we get to a star. The part went first to Howard Da Silva but RKO boss Howard Hughes fired him as a commie and reshot his scenes with Donlevy. Robert Taylor had told the HUAC “I can name a few who seem to sort of disrupt things once in a while. Whether or not they are communists I don’t know. One chap we have currently, I think is Howard da Silva. He always seems to have something to say at the wrong time.” That was enough to get Da Silva blacklisted and his career stopped in the blink of an eye.
.
. 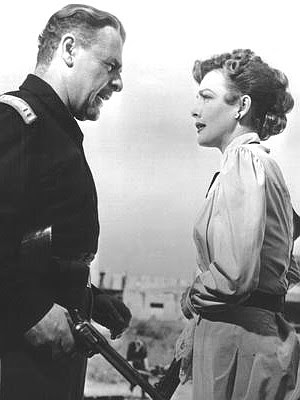 Brian Donlevy and Virginia Grey
.
Donlevy was an interesting fellow – a former soldier and aviator, twice wounded while flying in World War I, whose main interests were gold-mining and writing poetry – but he was not very good in Westerns, unless he could be a heavy in a saloon (as he was in his first three outings in the genre, Barbary Coast, Destry Rides Again and Union Pacific). He’d had less convincing parts in Jesse James  and When the Daltons Rode (in which he was an unlikely Grat), was second-billed but bad in the 1941 Billy the Kid (the Robert Taylor one), and was the worst-ever Trampas in the 1945 color remake of The Virginian (the Joel McCrea one). He was quite good in Canyon Passage because he played once more a ne’er-do-well compulsive gambler. Any part, in fact, where he was a saloon gambler/heavy was fine, preferably with a frock coat and a derringer. But on a horse with a six-gun, forget it. In Slaughter Trail he is anyway just going through the motions, trying to get his lines said quickly so he can get off the set and go home. His performance may only be described as perfunctory.
More interesting is the villain, the bandit Ike Vaughn, who was played by second-billed Gig Young. Poor Gig Young seems to have led a pretty tragic life, ending in the shooting of his fifth wife and himself in New York in 1978. He was condemned, despite an Oscar, to playing support roles and not lead. Westernwise, I thought he was wonderful as the gay hitman in Bring Me the Head of Alfred Garcia (if you consider that a Western). He had had small parts as lieutenants in two cavalry Westerns in 1941, They Died With Their Boots On (uncredited) and Here Comes the Cavalry (credited), was yet again a cavalry lieutenant in Only the Valiant in 1951, and in between was third billed in the very good Lust for Gold with Glenn Ford and Ida Lupino. Slaughter Trail was his fifth oater. Later he finally got a lead in the semi-Western rodeo picture Arena in 1953 and did four episodes of Warner Brothers Presents on TV. An alcoholic, he should have had Gene Wilder’s part on Blazing Saddles (he would have been superb) but had DTs on the set and was replaced (he was slated also to have been the voice on Charlie’s Angels but was too drunk to say the lines and was replaced at the last minute by John Forsythe). It was a less than glorious Western career and that’s a pity because while, like Donlevy, he was definitely sleepwalking through Slaughter Trail (and he is anyway written out for the whole middle section) he did enough in the saddle in other movies to make us believe he could have been quite good.
Otherwise, Andy Devine is there, as a comic sergeant. He is always fun to see, even in clunky parts like these. He was enormous of course, and his cavalry breeches are a sight to behold. They must have needed acres of cloth. In them, Andy rather reminds me of Obélix.
.
. 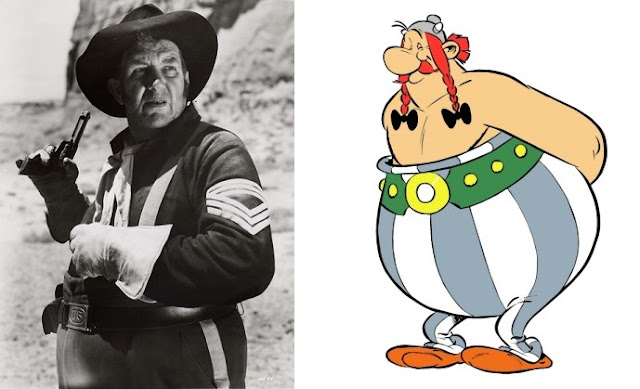 Obélix.                                                                                   Andy Devine.
.
The ‘love interest’ (there isn’t much love, actually) is Lorabelle Larkin (I ask you), played by Virginia Grey, a former child actress who did a few B-Westerns in the 40s.
There are many things wrong with Slaughter Trail. One of the worst aspects is the writing. The dialogue is dreadfully corny and plodding. Action is rare; there’s far too much talking, which wouldn’t be so bad if the talking weren’t so galumphing. Sid Kuller was a musician and songwriter but as a writer of Westerns (his only other one was a Gene Autry effort, Melody Ranch) he would have been better off considering another profession, cement-mixing, perhaps.
But the worst thing is the ‘singing narration’, a gimmick which is frankly painful. There’s a character called Singalong played by ‘folk-singer’ Terry Gilkyson, whom I can, however, forgive because he wrote Bear Necessities for The Jungle Book, a song to rival those of Schubert. Difficult to forgive him for Slaughter Trail, however, because the numerous and seemingly endless songs are trite ‘novelty’ items and they also bring the already snail-like pace of the action down to a virtual halt.
.
. 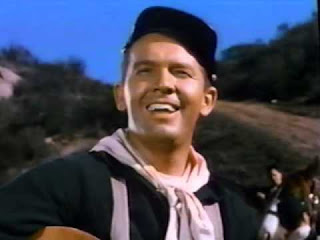 Singalong. I dare you.
.
It’s in color, at least, with photography by Jack Greenhalgh (lots of B and TV Westerns, from a 1926 Fred Thomson silent on) of reasonable Corrigan Ranch locations.
The Navajos are referred to throughout as redskins.
When Capt. Donlevy has lost dozens of men after the Navajos attack his fort (the Indians finally withdraw when their enemies are killed) he casts a cursory eye over the casualty list and shrugs, “It coulda been worse” before turning to more important matters. This was a combination of shocking writing, bad directing and lazy acting.
Music, maestro, please:
“And so our story ends
Thanks for listening, my friend
At last we’ve reached the end
Of Slaughter Trail.”
At last indeed. 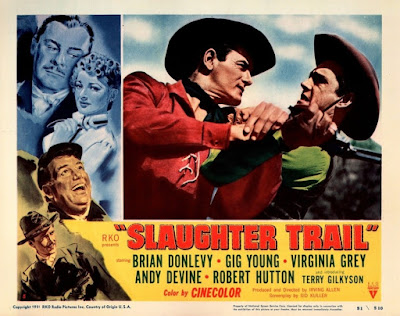