Bruce MacLeish Dern, born in Chicago in 1938, is one of the great Western actors. He has been Oscar nominated, though sadly not for a Western (very remiss of the Academy). For a time he was married to Diane Ladd (their daughter Laura is also an actor). He has had a long career and is still acting. He is one of my all-time favorite Western heavies.
.
.

One of the great ones
.
Mr Dern started in Westerns on TV. He was Jack Lord’s pal EJ Stocker in seventeen episodes of the rodeo series Stoney Burke in 1962 – 63. He became a regular of TV Westerns all through the 1960s – Wagon Train, Bonanza, The Virginian, Rawhide et al – almost always as the bad guy.
.
. 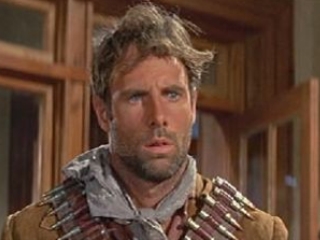 About to be shot
.
His first big-screen Western was The War Wagon in 1967, ninth billed, as a heavy shot down by John Wayne (but he would get his revenge five years later). He first really shone in a Western movie as
one of the ghastly Quint boys in the excellent Will Penny. The boy actor in that movie, Jon Gries, said he was genuinely afraid of Bruce Dern on the set. Suddenly we began to think that here was a world class Western heavy. There followed the ho-hum Waterhole #3 with James Coburn and then he was Miller in Clint Eastwood’s Hang ’em High. In 1969 he was a dumb thug imprisoned (in a jail with no bars) in Support Your Local Sheriff with James Garner.
.
. 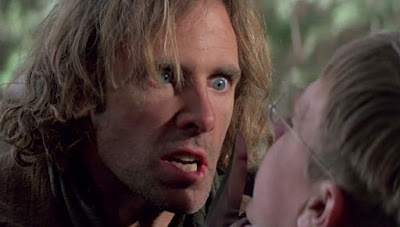 Genuinely scary in The Cowboys
.
But he was perfectly splendid in The Cowboys, again with Wayne, in 1972. In fact it’s one of my favorite Dern performances. In the picture he cold-bloodedly shoots Wayne in the back, getting his own back for The War Wagon. Wayne warned Dern, “America will hate you for this.” Dern wryly replied, “Yeah, but they’ll love me in Berkeley.” All this time he was also doing TV Western shows, The Big Valley, Lancer, The High Chaparral, whatever was going.
.
. 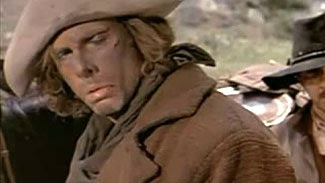 He shoots John Wayne in the back
.
His part in Pat Garrett & Billy the Kid was a bit disappointing for true Dernistas (for I am not alone). He was only an uncredited deputy. Peckinpah should have fired his casting director there. But then Bruce was the main guy (second billed after Kirk) in Posse. His Strawhorn was excellently malevolent. In 1982 he finally got top billing as badman Harry Tracy in the independent Harry Tracy: The Last of the Wild Bunch, a movie that sank without trace but deserves glory for Bruce.
TV movies followed, then he was the wheelchair-bound Will Plummer fighting a duel in the street with Jeff Bridges’s Wild Bill in the movie of the same name. Dern was a good choice because he was already known as a real Western baddy. He had a small part as the judge in the disappointing All the Pretty Horses in 2000 – he was now taking ‘older’ parts. More recently, he was evil plantation owner old man Carrucan in Django Unchained for Quentin Tarantino – great to see him – and he is a particularly nasty Confederate general in the Tarantino picture The Hateful Eight.
.

Plantation owner, as bad as ever

68 Western appearances in all, always splendid. Watch out for him. If his name appears in the titles you know you are in for a good baddy. Long may he reign.