Ryan Stills from Invaluable.com has been busy asking bloggers to name their most-wanted movie props. Perhaps in the hope that we will buy them from his site. “We want to know what iconic pieces from your favorite movies you’d love to own,” he says. I told him I couldn’t afford Duke’s Stetson or Clint’s poncho but it did get me thinking, and it might get you thinking too. Given a free hand (and large bank balance) what would you want from the World of Western?
Maybe the best approach to this is to think of your very favorite Western heroes and movies and then the most iconic item that kind of identifies them.
.
. 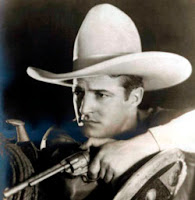 One of Tom’s Mexican saddles
.
I think I’d start pretty early, with Tom Mix maybe, and go for one of his hats, a white one by preference (though hero Tom defied popular belief by often wearing a black one). Or maybe one of his ultra-fancy saddles. Actually, though, I think I’d have his 1937 Cord 812 automobile. Wrecked or not (though I fancy it has been restored).
.
. 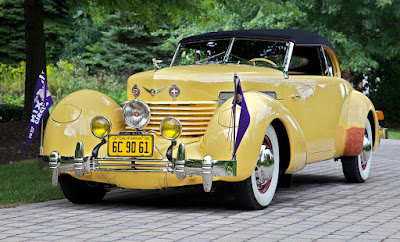 The badges on the hood were a gift from the King of Ruritania or somewhere. It may have been Denmark. It had a specially large accelerator pedal to accommodate cowboy boots and a holster for a .45 on the dashboard. Useful accessories, huh?
.
I have to have a six-shooter and, thinking long and hard, I reckon it’s got to be Wayne’s .44/.40, that old one with the yellowed handle he always carried. The .44 was an even more ubiquitous weapon on the frontier than the more iconic Colt .45 and that particular .44 has been so familiar to me in a lifetime of Western-watching.
.
. 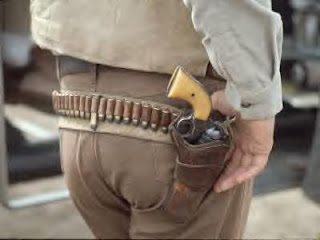 Duke’s .44/.40
.
When I was visiting the Buffalo Bill Western Museum in Cody, Wyoming (as one does) I saw the Winchester ’73 that James Stewart struggled so hard for in the eponymous 1950 movie. It had “Jimmie Stewart” engraved on the butt. You gotta have a rifle to complement the Colt, and that one is probably the most famous rifle of all, movies with Sharps, Springfields and what have you notwithstanding. I don’t guess Mr Stills can auction museum pieces but he asked, so I’m telling him.
.
.

The Winchester
.
And before we leave firearms, a derringer is a must-have. But which one? There’s the rub. Its owner must have been a crooked gambler or shady saloon lady. Maybe one that Victor Jory used. Yep, that’d do.
.
. 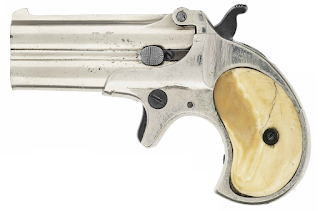 Handy to have up your sleeve
.
Gary Cooper’s marshal’s star from High Noon, the one he threw in the dust, so he doesn’t want it any more: I’ll have that.
.
. 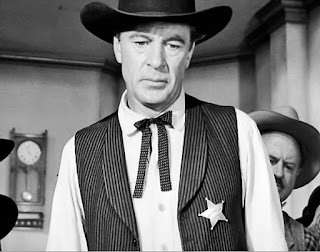 Coop’s star
.
I’d like a Western train, though where I’m going to keep it I’m not quite sure. I may have to buy my own railroad to run it on. The Durango-to-Silverton preferably. A train that’s been robbed, obviously, preferably by Jesse James but the Daltons would do. Maybe the one the Dalton boys (or their stand-in stuntmen anyway) jumped onto in When the Daltons Rode.
.
. 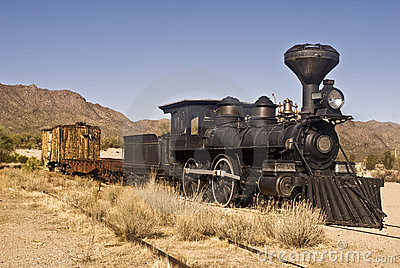 A good train is essential
.
Do horses count as props? Probably not and anyway most of the best ones will be dead. I’m not expecting Trigger or Silver or anything but maybe that nice palomino Randolph Scott rode, Stardust, I think his name was.
.
. 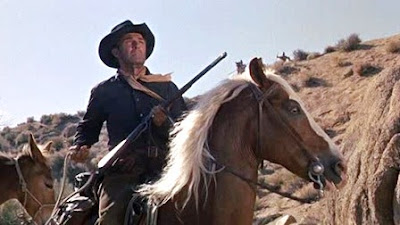 Randy on Stardust
.
A good stagecoach would be good. Again, it would have to have been held up. I like the one from Hombre. But that was a mudwagon; I think I’d prefer a proper Concord. The one from Stagecoach would probably be the most valuable but actually I don’t think Stagecoach is the best stagecoach
movie. The one that carried the jackass mail to Edgar Buchanan and Tyrone Power’s relay station in Rawhide would do me nicely.
.
. 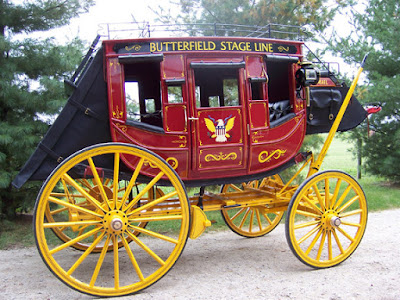 Classic: red with yellow wheels
.
I like Victorian gadgets in Westerns so I might go for the cigar-cutter Dean Jagger uses in the saloon in Pursued, the elephant-head soda fountain in Little Big Man or maybe that wheeled milkshake machine Calamity uses in Wild Bill. No, wait, I’ll have the phonograph in In Old Arizona. Oh hell, I’ll have them all.
One of Glenn Ford’s jeans jackets. Bret Maverick’s bowtie. I think I’m pretty well kitted out now. My checking account is slightly depleted but hey, it’s only money. I can always rob a train.
You can list your must-have items from Western movies by leaving a comment or e-mailing me at westblogger@gmail.com.