.
Rooster rides again – but he rides a raft, this time
.

John Wayne’s penultimate Western (only The Shootist was to come, a year later) was a Universal sequel which tried to cash in on Paramount’s True Grit (1969) but, sadly, it was a pale imitation.
.
. 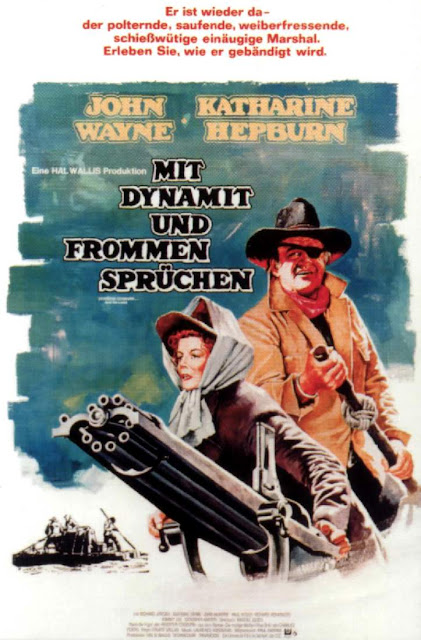 Weakish sequel – not to say ripoff – but still quite fun
.
They tried for an African Queen vibe; instead of a being accompanied by a young girl, as in True Grit, Rooster, like Humph before him, endured the trial and tribulation of an old termagant in the shape of missionary Katharine Hepburn as Miss Eula Goodnight, and shooting the rapids too. The plot was the same as True Grit, though: her father is shot down by a Western bad man, and she is determined to ride with the US marshal to bring the murderer to book. Hepburn and Wayne were both born in 1907 so were two years short of 70. That was OK for Rooster, I guess (though he was much younger in the original book) but rather absurd for la Hepburn as in the movie her preacher father (Jon Lormer, born 1906) was only a year older than she was. Still.
.
.

Two Hollywood icons
.
And there are many references to True Grit: Chen Lee (different actor, now Tommy Lee) and General Sterling Price (feline version, probably a different actor too) are there, and the corn dodgers, as well as Rooster’s recounting of how he bested Ned Pepper and his gang in the clearing with the reins in his teeth, and a cameo appearance for Strother Martin (as a curmudgeonly ferryman). All these were designed to remind us how much this movie is like that one. Regrettably, however, it isn’t, really.
.
. 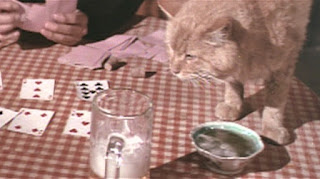 General Sterling Price about to drink his beer
.
It does have its points, though, and it is quite fun, I have to say that. Judge Isaac Parker is played by John McIntire, for one thing, and regular readers will know what a McIntire fan I am. He improved many a Western.
.
.

Judge John McIntire
.
The bad guys are quite good, too (they weren’t in fact the strongest point about True Grit). Anthony Zerbe plays a half-Indian scout, Breed, former ally of Rooster’s, gone over to the dark side, and Richard Jordan takes the Ned Pepperish role of the chief villain, Hawk. Zerbe’s debut was as Dutchy in Will Penny in 1967 (and very good he was too) and he had a small part as a hustler in The Life and Times of Judge Roy Bean in 1972, so was getting known to Western fans. Rooster Cogburn was only his third big-screen Western but he was a stalwart of Western TV shows. As for Jordan, he had a very posh education and was a hi-falutin’ Shakespeare actor but was very good as a lowlife in Westerns too. He was badman Crowe Wheelwright, accomplice of Robert Duvall (Ned Pepper in True
Grit) in Lawman in 1971 (a very weak movie but that wasn’t his fault) and he was also in another bad Michael Winner-directed Western, Chato’s Land in ‘72 (so perhaps that was his fault). But I thought he was best as henchman RL Davis in the outstanding Valdez is Coming (also 1971). Anyway, both Zerbe and Jordan do a very good job in Rooster Cogburn.
.
.

Good bad guys – Zerbe and Jordan
.
As with True Grit, there are nice locations, this time in Deschutes National Forest and Rogue River, Oregon. It’s in Panavision and Technicolor. The DP was Harry Stradling Jr, so the cinematography is high class; he’d done Stars in My Crown, Little Big Man and There Was a Crooked Man, among many others, and whatever you think of those movies as Westerns (and they are a bit iffy) there is no denying their visual quality. He also shot about a million Gunsmoke episodes 1964 – 67. Anyway, Rooster Cogburn looks nice. The story (written by Martha Hyer, according to IMDb, or Martin Julien, according to the on-screen credit, and suggested by the character “Rooster Cogburn” from the novel
“True Grit” as the intro has it) is set in Wyoming in 1880 (Miss Goodnight says they should reach Cheyenne by nightfall) – although what a Fort Smith, Arkansas judge is doing in it is a mystery.
The director was Stuart Millar, who tried valiantly to follow Henry hathaway but clearly wasn’t in the same league. He had been a producer of Little Big Man but Rooster Cogburn was his only Western as director.
Wayne as Rooster launches into the part with even more gusto than he did for Hathaway – in fact he comes dangerously near to overacting. Hepburn as Goodnight does her Hepburn act, grande dame with, as Rooster says, all that wah wah accent. There are a couple of moments which work well – Hepburn reciting the 23rd Psalm as Jordan shoots at her feet, or wetting the foresight of her Winchester with her finger prior to shooting one of the bad guys.
.
.

Strother does his thing
.
It isn’t quite The African Queen because Rooster and Miss Goodnight are joined on their perilous voyage by a young Indian boy, Wolf (Richard Romancito), who clearly comes to admire Rooster and asks if there has ever been an Indian marshal because he’d like to become one. It’s actually quite a touching moment. Wolf is very handy in a scrape and what with Miss Goodnight’s markswomanship, the trio make a formidable force against the badmen. The badmen number ten at first but are gradually whittled down in the running fight, until they are four in a row on their horses, just like Lucky Ned Pepper and his cronies in that clearing in Colorado. Mind, Rooster’s Gatling gun and nitroglycerine help.
At one point, after a particularly waspish criticism from Miss Goodnight, Rooster makes an aside to Wolf, “God help us if they ever give women the vote.” Actually Wyoming women won the right to vote in 1869, Rooster, old boy.
Of course stunt doubles are often used and are rather too obviously doubles sometimes, but you can’t blame Miss Hepburn for having a stand-in during the white-water rafting scenes.
There’s a .22 pepperbox which Rooster gives Wolf and he uses against a badman, and this pepperbox is almost a derringer,so that sent the movie up in my estimation. Rooster says he has a trusty Navy Colt but in fact he has that good old yellow-handled .44 Frontier he always used.
Rooster gets drunk again and there is irritating ‘comic’ music (Laurence Rosenthal) which so often accompanied the ‘amusing’ drunken scenes.
Why on earth they load the nitro on the raft in the first place, heaven only knows. Why didn’t they hide it for the Army to find, or even blow it up? But no, they have to shoot the rapids with it. Much of the plot is this improbable.
The movie deliberately invites comparisons with True Grit and The African Queen – in fact the actors and story make frequent references to them – so we are justified in saying that Rooster Cogburn is weak by comparison. Still, I think it’s nevertheless quite fun, and sequels have always been a Hollywood thing. I suppose we are all pro-recycling these days.