.
Wagon trains are a staple of the Western book, movie and TV show, and pretty well always have been. The prairie schooner is as iconic to the genre as the sheriff’s star or the Indian’s whoop. While the real journeys westward along the Oregon Trail were certainly heroic, they often lasted five months and the dangers that occasionally punctuated the trek must have been accompanied by long, long stretches of unutterable boredom. Sadly, the same is sometimes true of wagon-train Western movies. The Covered Wagon of 1923 moved at the pace of the slowest oxen. Later attempts, like The Big Trail, Wagon Wheels, The Way West and so on were also often too long, and frankly dull. Directors and writers had to invent plot devices to liven things up – Indian attacks, badmen among the settlers, romances of course. They had standard set-pieces such as the river crossing that goes wrong, lowering wagons down bluffs, and the rest, which were expected in any such movie. Wagonmaster was pretty darn good but the only seriously classy wagon train movie is the wonderful Westward the Women.
.
. 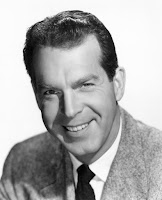 Fred
.
Fred MacMurray never really liked Westerns but he was good in them, and he made quite a few – eleven, twelve or thirteen, depending on your definition of a Western. Unfortunately, though, his very last oater was a cheap, corny, badly-directed and badly-written effort with some poor acting as well, and it was really weak. No wonder Fred didn’t make another one. He moved on to inventing flubber.
The Oregon Trail (no relation to the 1923, 1928, 1936, 1939 or 1947 pictures, yawn) starts back east, in 1846, with Fred in his Meriwether Lewis costume being sent by his boss James Gordon Bennett at The New York Herald on a wagon train to prove that the government is secretly sending soldiers in plain clothes hidden among the settlers to make sure Oregon does not fall into the hands of the dastardly British (I told you they had to invent plot devices). Meanwhile, in Washington, President Polk (Addison Richards) points to a map which curiously already shows the Oregon Compromise (and the lands gained after the Mexican War) and does some double-dealing with the British ambassador (Lumsden Hare).
.
. 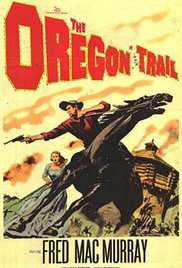 .
The rest of the story is a straight “Wagons roll!” movie with the usual clichés, such as Indian attacks, thirst and so on. On the train are rogue-dreamer John Carradine (quite amusing), with a cargo of apple trees; a ‘settler’ who is obviously an Army captain (William Bishop, very bland); a wholesome family which includes a young girl, naturally, Prudence (unknown Nina Shipman in her only Western); and the usual assortment of settlers. The train boss is Henry Hull, who only ever had two styles of performance, overacting and overacting wildly. His demise is hilariously badly handled by actor and director.
.
. 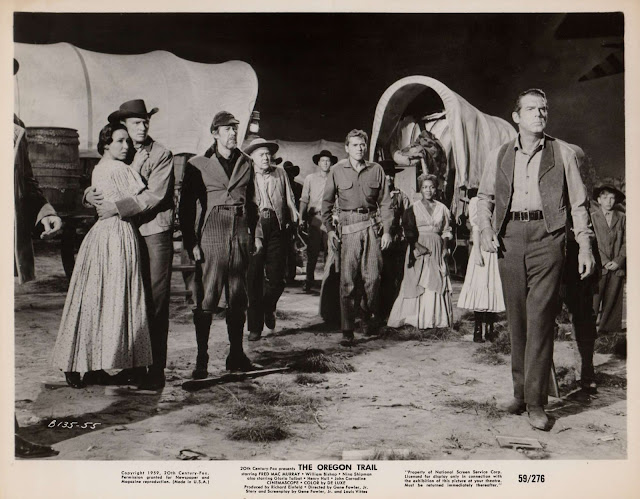 That’s Carradine third from left, in yet another bad studio shot
.
They finally get to Fort Laramie, which is (of course) one of those wooden toy forts Hollywood always used (Fort Laramie is and was a large open place in a bend of the river). And obviously the Indians launch an attack on it (which they never did). The attack is very badly handled by the director and is frankly pathetic.
.
. 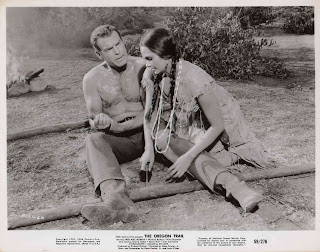 Rescue
.
The bad guy is renegade trapper Gabe Hastings (John Dierkes) who is on the Indians’ side. He captures Fred but before he can torture him to death, a fair Indian maid comes to rescue the captive. Pocohontas syndrome. She is Shona (Gloria Talbott, who is about as Native American as I am, and I’m not). She was 28 to Fred’s 51 but never mind, they can get it together and set off in a wagon together in the last reel.
.
. 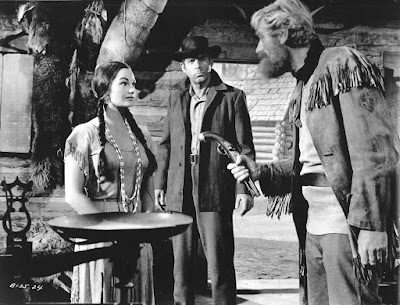 Renegade trapper Gabe threatens Gloria
.
The director was Gene Fowler Jr and he also worked with Louis Vittes on the screenplay. They were best known for such marvels as I Was a Teenage Werewolf and I Married a Monster from Outer Space (which also featured Talbott). They mostly did TV work but managed the occasional big-screen Western, such as the second-rate Charles Bronson picture Showdown at Boot Hill. Really, producer Richard Einfeld and Associate Producers (API) ought to have got someone good instead.
.
. 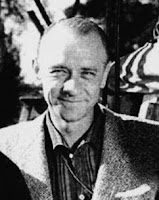 Fowler
.
The worst aspect of the picture is the fact that the majority is done on studio sets with backdrops painted so badly as to be embarrassing. Such location shooting as there was is very obviously intercut stock footage taken from other movies, and doesn’t match.
The opening ballad, which is most unfortunately reprised several times in the movie, is so dire that you’ll have to turn the sound down.
A key element of the plot is the fact that the settlers are able to beat the Indians in the attack on the fort because they have Colt six-shooters. As we are in 1846 and Colt six-shooters haven’t been invented yet, this too is on the phony side.
.
. 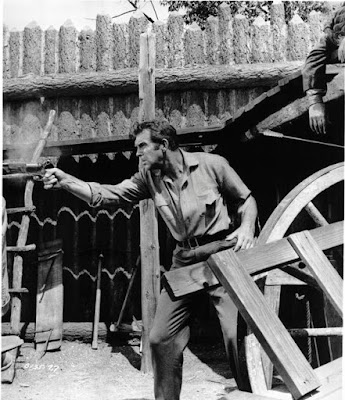 Lucky they have Colt six-shooters
.
No, I’m afraid this movie is very tawdry.
PrevPreviousAt Gunpoint (AA, 1955)
NextDay of Anger (NGP, 1967)Next