Fred does what a man’s gotta do 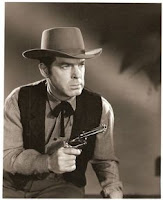 Fred MacMurray (left) never really liked Westerns. He once said, “The horse and I were never as one”. He was nevertheless very good in oaters, I think, especially if the role required a decent but tough hombre called to duty. And he did quite a lot of them, thirteen in fact, from The Texas Rangers in 1936 to The Oregon Trail in 1959. One of my favorite Fred Westerns was a 1955 Allied Artists effort, At Gunpoint. It is an absolutely classic treatment of that theme so central to the genre, that a man’s gotta do what a man’s gotta do. And Fred was ideally cast as the ordinary fellow who may be scared but knows what’s right and so he grits his teeth and does it. Fans of 50s Westerns (and I guess that’s you, e-pards) definitely need to see this movie. 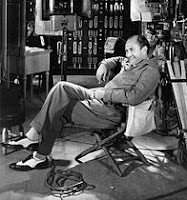 At Gunpoint was directed by Alfred L Werker (right), a Hollywood vet who went right back to the silent days (he had been part of the crew on Fred Thomson silent Westerns, including the now-lost 1927 Jesse James) when he often worked with Lloyd Ingraham (he was Lloyd’s co-Werker, you might say). Mr Werker had an enormous headstart in life by being born in Deadwood, SD in 1896. Stuart Gilmore, director of the Joel McCrea The Virginian, was born in Tombstone. Dennis Hopper was born in Dodge. These people might be thought to have an unfair advantage in life. Forget silver spoons, this is like being born with a silver Colt in your holster, don’t you think? Anyway, Alfred had been at Paramount but later descended to lesser studios and got a rep as a gun-for-hire director, finishing pictures when other directors were fired or got sick. But he was capable of good stuff, like The Last Posse or Three Hours to Kill, and he did an excellent job on At Gunpoint.
It was written by ultra-experienced Daniel B Ullman, who bashed out screenplays for Westerns for years and years, and very competently too.
Allied Artists pushed the budgetary boat out on the picture. Although it is almost entirely set in town (the nice Western town set AA used) they shot it in Technicolor and CinemaScope, and not only did they get Fred on loan-out from Paramount, they hired a host of really good character actors to back him up.
.
.

Wide screen color
.
It opens before the titles with outlaw Skip Homeier practicing for the next hold-up with an empty gun, dramatic Carmen Dragon music in the background. (And what a great name Carmen Dragon had). Of course all of us Westernistas know Skip Homeier. Ever since shooting Gregory Peck in the back in The Gunfighter in 1950 he had specialized in sniveling punk kid roles. Dawn at Socorro, Ten Wanted Men, whenever they wanted a sniveling punk kid, they reached for the phone and called Skip. By 1955 he was growing out of punk kid roles and was just doing punks. He is ideal as the psychopathic killer in At Gunpoint.
.
. 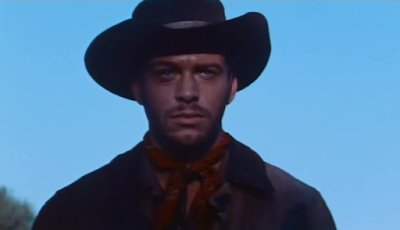 Skip great as punk outlaw
.
The great Jack Lambert, another superb Western bad guy, is also in Skip’s gang. Well, they decide to rob the bank of the small town of Plainview, Texas, and duly do so, while manager John Qualen looks fearfully on. You just know Skip is going to shoot someone and sure enough, he drills the teller (Byron Foulger). But as the robbers are high-tailing it out of town, having gunned down the elderly marshal (Harry Shannon) in the street before he could even get a shot off, storekeeper Fred emerges, grabs the fallen marshal’s six-shooter and with a really lucky shot gets the outlaw carrying the money, Skip’s brother (John Pickard). Townsman Frank Ferguson picks up his rifle and finishes the fellow off. The rest of the gang get away but Fred ‘n’ Frank are the heroes of the hour.
.
. 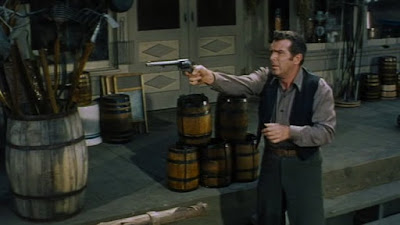 Storekeeper Fred gets off a lucky shot. Nice long-barreled Colt.
.
We meet other characters. Walter Brennan is the cranky old doc, Fred’s friend. Beautiful Dorothy Malone is Fred’s wife Martha (she did two Westerns with him). Lassie boy Tommy Rettig is their son Bill (or was he Rin Tin Tin, I always forget). I told you, it’s a good cast. Whit Bissell and Irving Bacon are tremulous townsmen. Harry Lauter is the federal marshal who drops by to investigate the crime (but soon unfortunately departs). James Griffith is a drifter who calls in to the saloon.
.
. 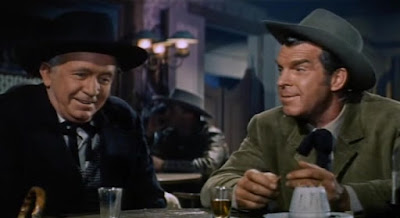 Doc Brennan and Fred, happy before the trouble starts
.
Storekeeper Fred is very well liked. He gives candy to the kids and is a loving father and husband. However, once they realize that the gang is hell-bent on avenging its fallen member, and wishes to wreak especial revenge on Frank ‘n’ Fred, the townsfolk go all pusillanimous, as townspeople in Westerns are wont to do. It was three years on from High Noon, so everyone was used to this. And then Frank Ferguson is ambushed on the way home and murdered, so they all (except Doc Brennan) find reasons for not backing Fred up. Standing next to Fred would be a dangerous place to be right now. They shun his store, they shun him, they even shun his wife and boy.
.
. 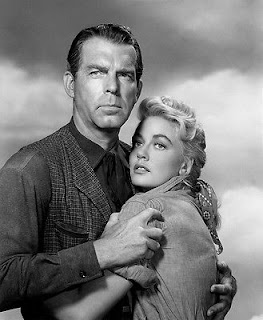 Loving couple
.
Skip, in his cowardly and punkish way, shoots Martha’s brother Wally, who helps in the store (James O’Hara) through the door, mistaking him for Fred. The townsmen hold a meeting inviting Fred to pack up and leave. Even Dorothy wants to go. But Fred makes a noble speech, telling them that a man’s gotta do etc. And anyway, that would be un-American.
The climax nears, as the four horsemen of the Apocalypse (well, the outlaws, anyway) ride down the street as Fred stands alone with a pistol that he doesn’t really know how to use…
.
. 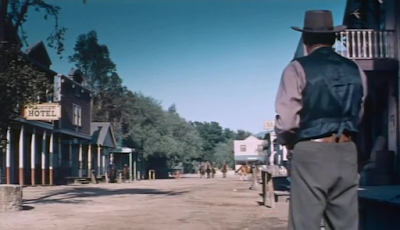 .
I don’t think it will be too much of a spoiler to tell you that the bad guys do not win. In fact Doc shoots Skip with his shotgun. Skip is on a wire and is yanked pretty sharply off his horse to the dust. Or his stuntman double is anyway. They’d obviously seen Shane. There’s a sweet shot of the triangular, or rather heart-shaped tableau vivant of Fred, Dorothy and Tommy as we all understand that they will live happily ever after.

Fred is really good in this as the ordinary-Joe general store man who stands up tall when the going gets rough. And the rest of the acting is pretty classy too. The idea of the non-professional citizen facing down the experienced gunmen bad guys was not new and it would be done again of course (3:10 to Yuma two years later is a good example). Indeed, there is little particularly original about this picture. But it’s very well done. Full marks to cast and crew. 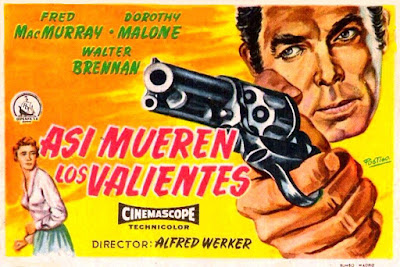 PrevPreviousStar in the Dust (Universal, 1956)
NextThe Oregon Trail (Fox, 1959)Next

PrevPreviousStar in the Dust (Universal, 1956)
NextThe Oregon Trail (Fox, 1959)Next
Jeff Arnold © 2023 – All rights reserved – Designed by BetterCallChris
Scroll Up