.
Dale is a good badman
.
.
Essentially a 1950s Western, with only a slightly more visible amount of bosom and leg and a little more tomato-sauce gore, this straight-down-the-line Allied Artists color actioner was a post-Tales of Wells Fargo Dale Robertson effort.

Dale (left) is of course best known for his TV horse operas, particularly Wells Fargo but also later Iron Horse and as host of Death Valley Days. But he did a good number of big-screen Westerns too, starting as a cameo Jesse James in the Randolph Scott picture Fighting Man of the Plains in 1949 and leading from 1952 on – The Outcasts of Poker Flat was his first leading role. Blood on the Arrow was in fact his last feature Western – if you discount the cartoon The Man from Button Willow. Afterwards it would be only TV. As a boy I was a dyed-in-the-wool Wells Fargo fan so Dale could do no wrong. 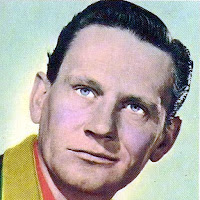 In Blood on the Arrow Dale is badman Wade Cooper, wanted in Bisbee (so someone had been reading Elmore Leonard or watching 3:10). He is backed up in Blood on the Arrow by the less then spectacular Wendell Corey (right) and Martha Hyer. Corey was never good in Westerns, unsuited to the genre in my view. He was a Hal B Wallis find who got a contract with Paramount but like Dale he did mostly TV work. As for big screen Westerns, he was miscast in Anthony Mann’s The Furies in 1950, was an unconvincing Frank James in the Paramount Western The Great Missouri Raid in ’51 (with Macdonald Carey as an equally unlikely Jesse), and he himself became a silly Jesse in the Bob Hope comedy Western Alias Jesse James  in ’59. In Blood on the Arrow he plays an unpleasant and abusive husband and father who has struck it rich with a mine in 1871 Arizona, with Coyotero Apaches under Chief Kai-La (Robert Carricart) on the warpath.

Martha Hyer (left), Corey’s long-suffering wife in the movie, had been Jock Mahoney’s amour in Universal’s Showdown at Abilene in 1956 and the year after Blood on the Arrow she would be John Wayne’s in Paramount’s The Sons of Katie Elder. She would soon also become Mrs Hal B Wallis. In Blood on the Arrow she does OK, I guess, looking very mid-60s though, with done-up blonde hair and plunging décolleté. She is first seen in one of those pools which are always conveniently situated in the desert in Westerns for women daringly to bathe in.
The plot concerns Corey offering rifles to the Indians in return for their lives. Dale proposes to steal the weapons from the quartermaster’s stores at nearby Apache Bend in return for a big chunk of the gold in Corey’s mine. The Apaches take the little boy hostage as a guarantee. As you know, providing the Indians with guns in Westerns is a crime somewhere on the scale of evil between cannibalism and matricide. The Army captain (Boyce Wright) expresses disgust than even a man such as Wade Cooper could “turn against his own people” – for, you see, Apaches are not Americans. Actually, though, we know perfectly well even in the first reel that as it’s Dale he won’t actually hand the firesticks over to Kai-La. They’ll probably end up blown up in the mine or something.
.
. 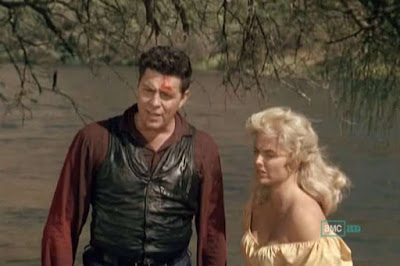 Martha spends much of the movie in a rather un-1871 blouse
.
The best thing about the cast is Wade’s gang, when they turn up (they have been lurking in Nogales) because they contain Ted de Corsia as Jud and Elisha Cook Jr as Tex. Ted is quite dandified and appears to be still wearing the costume he had donned as Shanghai Pierce in Gunfight at the OK Corral seven years earlier, though it now seems rather the worse for wear, understandably. Elisha, always dependable as a gang member, was far from at the end of his Western career (he’d still be soldiering on in Tom Horn in 1980). There are another couple of bandits, Mike and Charlie (John Matthews and Tom Reese) but they are soon dispensed with, Mike gunned down by Wade in a quick-draw showdown and Charlie falling prey to an Apache arrow. You see, this picture is about four bad men and a badman. Regular readers will recognize the distinction. And if you’re not a regular reader, well, shame on you.
.
. 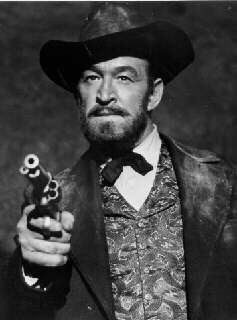 Ted as Shanghai
.
The picture was directed by good old Sidney Salkow (that’s Sid, below) and written by equally meritorious Robert E Kent. Oft have we waxed lyrical on the careers of these two. It was shot in nice southern Arizona locations (so plenty of saguaros) in a bright color. There’s action all the way. I thought it was rather good.
.
. 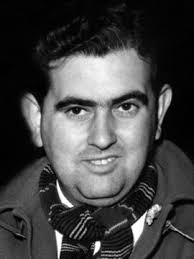 .
You will not be surprised to learn (so no spoiler here) that the US Cavalry arrives at the last moment, all the bad guys are eliminated and Dale and Martha go off with the little boy to start a new life in California, a new family unit, just as in Hondo, The Tin Star, Yuma, Face of a Fugitive, Quantrill’s Raiders, Trooper Hook… oh, any number of other Westerns you care to name.
Definitely watchable.
PrevPreviousSundown Saunders (Supreme Pictures, 1935)
NextBorn to the Saddle (Astor Pictures Corporation, 1953)Next