It could be argued that 1953 was the very high point of the Western movie. The majors produced some of the greatest examples of the genre ever. But of course the good old B-Western trotted on, unaffected by these bigger pictures. And you didn’t get much more ‘B’ than Elliott-Shelton Films Inc., Born to the Saddle’s production company, whose only Western this was, or Astor Pictures Corporation, which did the US theatrical release, which though it distributed nearly 300 motion pictures between 1925 and 1962, often re-releases, wasn’t exactly a major distributor of A-pictures. Never mind, they did their best.

Born to the Saddle was directed by William Beaudine (left), who started as a silent movie actor in 1909 but who helmed literally hundreds (some say as many as 500) movies between 1915 and 1970, an astonishing record. 80-odd of these were Westerns, usually ultra-low-budget ones. He is probably best known for the drive-in horror classics Billy the Kid Versus Dracula and Jesse James Meets Frankenstein’s Daughter, both 1966, which no doubt you have thrilled to. To say he didn’t have a clue would probably be unfair; after all, he must have been able to direct a cheap Western in his sleep. But if you rely on a director to elicit good performances from the cast and for a pacey, well-developed plot, then I fear you are going to be disappointed by a Beaudine picture. Never mind again.
It’s the story of a quarter horse – in fact it’s based on the Gordon Young novel Quarter Horse. Sadly Adele Buffington’s screenplay from it is clunky and plodding to a degree. And the actors are, mostly, unable to deliver such obvious lines with anything like authenticity. Still, at the risk of repeating myself, never mind. 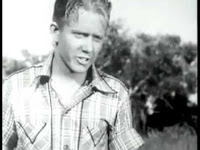 It starts with a young boy, Bill, coming to town to find his uncle. Well, I say a young boy: he’s often referred to as that in the script but he was played by Chuck Courtney (right), 23 at the time. Anyway, Bill asks Matt Daggett (Donald Woods), a frock-coated saloon keeper, so obviously therefore a crook, though this time, bizarrely, he has no pencil mustache or derringer, where his uncle might be. The answer is right behind him because just at that mo’ the uncle is taking aim at Daggett. He misses, and shoots the boy in the back. Oops. The uncle is killed by Daggett but the boy survives, nursed back to health by the saloon keeper’s kindly and slightly posh wife Kate (Karen Morley). 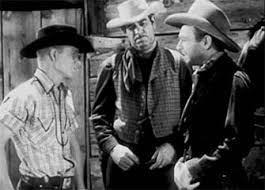 Daggett has henchmen, naturally (they were obligatory in them days) and the good news is that one of them, the evilest one of all in fact, is none other than Glenn Strange the Great (that’s him in the middle on the left, henching). Any Western, even the B-est of Bs, is lifted by Glenn as a thug. And then a kindly local rancher, Bob Marshall, who has raised the quarter horse and a niece, is Big John Cannon, more than a decade before he bossed The High Chaparral. Leif has black hair, dye altering his Nordic looks. James Arness did the same about this time. Good guys aren’t generally blond in Westerns, I don’t know why. Actually Mr Erikson topped the bill. I guess he was the biggest star they had, though I would have made Glenn Strange the star myself.
.
. 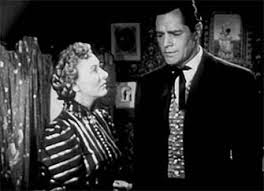 The Daggetts, not a happy couple
.
The horse he raised is a good one, and the boy a natural to ride him (hence the movie title) but the niece, Jerri (Dolores Prest) is less of a success. In fact she is arrogant, snobbish and bossy. So we understand in a trice that she and Bill will find true love in the last reel, which they duly do.
.
. 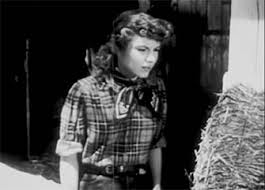 Tiresome niece
.
Now Daggett is smarmy and to all outward appearances respectable but in fact he beats his wife and dallies with saloon girl Doris, the skunk. Bill has developed a schoolboy crush on Mrs Daggett while being nursed and he gets pretty riled up when he discovers this two-timing behavior on the part of the saloon owner. We sense a showdown looming. It all climaxes on race day, when Bill rides the quarter horse in a big race and of course Daggett tries to nobble the horse, but it wins anyway.
.
. 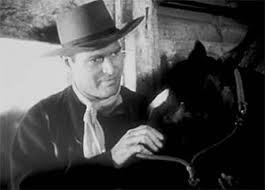 Leif is a rich rancher but not yet on the High Chaparral
.
It’s all very predictable and also a little juvenile. I don’t care. I thought it was rather good.
It was shot in Trucolor but is usually now seen in black & white. 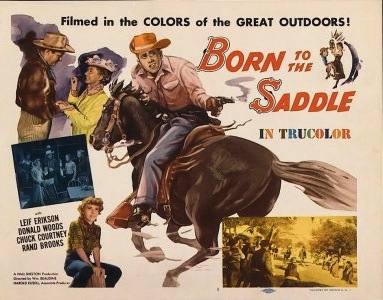 PrevPreviousBlood on the Arrow (AA, 1964)
NextNew Mexico (UA, 1951)Next
Jeff Arnold © 2023 – All rights reserved – Designed by BetterCallChris
Scroll Up