OK if you’re desperate for a Western 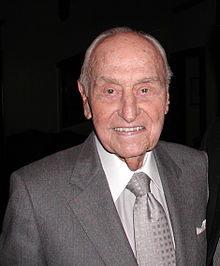 Waco was an AC Lyles production. Andrew Craddock Lyles, Jr (1918 – 2013), pictured left, was, as you probably know, a film producer for Paramount Pictures, best known for making a variety of Westerns in the 1950s and 1960s. Lyles said that he was asked by Paramount to do a Western when they realized they had none on their schedule of releases. When Law of the Lawless did well at the box office in 1964, Paramount asked him how many more he could do a year. Lyles replied “five” and he was given the green light to produce more second features for the studio (though not five a year). Lyles filled his cast with many older, experienced actors who were his personal friends. The glory days of the Western were pretty well over and Lyles’s 60s oaters tended to be rather cheap looking, slightly lurid and the actors were often showing signs of middle-aged spread. The glory days of the 1950s were definitely over. But the pictures had their charm.

Waco had Howard Keel and Jane Russell topping the billing. Keel, then in his late forties, had been the brawny baritone of MGM who had them swooning in the aisles. He’d been Frank Butler to Betty Grable’s Annie Oakley in Annie Get Your Gun in 1950 and three years later he was Wild Bill Hickok to Doris Day’s Jane Canary in Calamity Jane. He had tried a slightly more serious Western part in Ride, Vaquero! the same year but it was back to form in the dire (but popular) Seven Brides for Seven Brothers the following year. These musicals can only be defined as Westerns by a stretch. He would be Levi Walking Bear in John Wayne’s The War Wagon the year after Waco but in all honesty one would hardly define him as a leading Western actor. He would become well kown on Dallas. Still, he was good enough for Lyles. 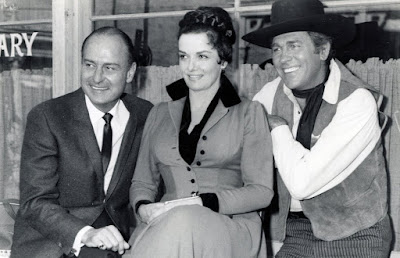 Lyles, Russell, Keel on the set

As for Ms Russell, well, she was ‘only’ forty-five at the time but, without wishing to be ungallant (though I fear that an occasional lack of gallantry is one of your Jeff’s rare faults) she looks rather bizarre in this picture, with a small cosmetically altered head on a, ahem, rather substantial body. I am sure she was a very nice person and all but she was, I fear, another who was slightly unsuited to the Western – though she was doubtless a good actress in other kinds of movie. She had famously started in our noble genre with the (then) sensational The Outlaw in 1943, a perfectly dreadful picture, had redeemed herself in 1948 as Calamity Jane (another one) in the highly entertaining The Paleface with Bob Hope in 1948, and returned in the 1952 sequel (which I think was even better) Son of Paleface in 1952. The same year she was Montana Belle, then she appeared with Clark Gable in the interminable, plodding and turgid The Tall Men. Waco was her seventh and last big-screen oater. 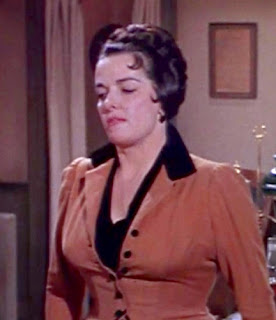 La Russell does her thing

By 1966, though, I’m not sure that the Keel-Russell billing was going to have them waiting in lines round the block to see a Western.

The rest of the cast had a certain Western cachet, I guess, but they too were hardly John Wayne. Brian Donlevy got third billing but it was a real cheat because he only had a couple of scenes and total screen time was about one minute. I like Donlevy in other genres (e.g. as Quatermass), and he had a fascinating life, but he was another who never quite convinced in Westerns. 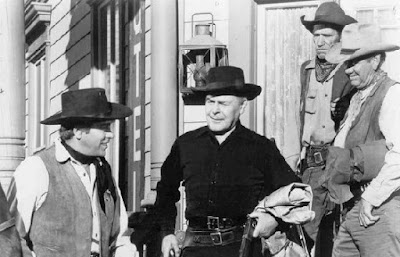 Now, who else can I be rude about? Oh yes, Wendell Corey. 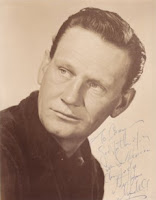 Corey (right) was a Hal B Wallis discovery and got a Paramount contract but he tended to be cast in supporting roles and then from the 1960s did a lot of TV work. His career wasn’t exactly helped by an alcohol problem. As far as Westerns were concerned, he’d started second billed but weak in The Furies (produced by Wallis), he’d been Frank James in the pretty clunky The Great Missouri Raid and then he was brother Jesse (a very unconvincing one) in Alias Jesse James,  another Bob Hope comedy. But he really didn’t ‘do’ Westerns, not properly. In Waco he plays a pastor – appropriately, actually, as he was the son of a clergyman. He’s Jane Russell’s husband. They both wear somber black throughout. 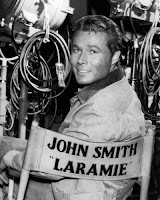 John Smith (left) had been Slim Sherman on Laramie on TV (he was the heart-throb of one of my sisters; another preferred Robert Fuller and they disagreed). Here, with a little more avoirdupois, he plays the crooked saloon owner and would-be town boss (all proper Westerns have to have one). Blonds can play villains in Westerns, though rarely goodies (it’s one of the reasons why Alan Ladd was unconvincing in the genre). Smith’s OK, I guess, though the picture really needed that smarmy blond saloon owner de luxe, Lyle Bettger, who was still going strong in 1966 – in fact he was in another Lyles Western, Johnny Reno. One good thing, though: as is only right and proper, the slimy saloon owner has a derringer! Excellent. In fact he does for the pastor with it. No bad thing. Of course the preacher had to croak so that Waco could go off with Jane Russell.

Lower down the cast list we have John Agar in a small part. He had started at the top in Westerns but worked his way down. He married Shirley Temple and was cast by John Ford as one of her suitors in the great Fort Apache in 1948, and also got a part in its sequel She Wore a Yellow Ribbon the year after. Ford, who could be a nasty bully, made Agar’s life hell on the set but John Wayne stood up for him (as he often did; he was a decent man) and later in life gave the out-of-work actor parts in his 60s commercial movies: in fact Agar’s last three were Duke pictures. Waco, and Johnny Reno, were the last he did before those Wayne vehicles.

Robert Lowery is the mayor. He had been in John Ford’s Drums along the Mohawk in 1939 and would later be entertaining as the political hack governor to whom John Wayne waspishly gave the name Humphrey, in the otherwise largely unfunny McLintock. Lowery was in a great number of low-budget and TV Westerns and did actually lead in Universal’s 1944 serial Mystery of the Riverboat and then some Western features. He is consigned to a bit part here, though.

Further still down the billing we have Gene Evans as the drunk deputy, DeForest Kelley as saloon owner Smith’s henchman and Willard Parker in a bit part as heavy. I always like to see Gene, credited by IMDb with no fewer than 157 Western appearances. Kelley, best known of course as Bones in Star Trek, did quite a few feature Westerns and wasn’t at all bad in them. Parker did a lot of Westerns too; he was Cole Younger in Young Jesse James  and was star of Tales of the Texas Rangers on TV. Waco was his very last outing in the saddle, or indeed before the cameras at all. 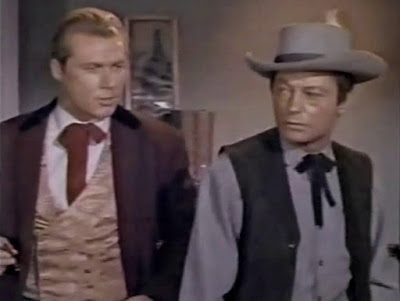 Silent star Richard Arlen, then 67, was wheeled out for a cameo. He plays the sheriff shot down by DeForest in the first reel. In his first talkie Arlen had been Steve in the greatest of all movie versions of The Virginian, the 1929 Gary Cooper one.

And Fuzzy Knight is there too, in a 30-second micropart as the telegraph operator.

Well, that’s enough rambling on about the actors. Although in a way, that was the point of these pictures.

The plot is a bit tired, I fear. Emporia, WY is a wide-open town which drunken cowpokes spend their time hurrahing (rather weakly on the part of the extras). The civic elders send for feared gunfighter Waco (Keel), pardoned from the pen by the governor so that he can come and clean up the town. Crooked saloon owner Joe Gore (Smith) and his henchman Rile (Kelley) don’t care for this idea at all – in fact they were the ones who shot the previous sheriff (Arlen) in the back. They set up two Jenner brothers (Parker and Regis Parton) to gun Waco down on arrival – you see there used to be three brothers but thanks to Waco there are now only two. Their mother, Ma Jenner (Anne Seymour) also wants revenge and she’s pretty handy with a rifle. Of course, Waco easily disposes of these. In fact he makes the two brothers strip (off camera, of course, no nudity here) and burns their clothes on Main Street. 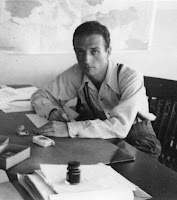 Waco is undecided as to whether to clean up the town as lawman or take it over from Gore. A better actor and writer would have made more of this hesitation. It could have been interesting. Steve Fisher (right) did the screenplay. He worked on a couple of goodish Westerns but mostly did TV work. He was Lyles’s go-to writer for these 60s retro-Westerns. He put in a rape (off camera again, naturally) and the girl attacked (Tracy Olsen) then calls herself “filth” and gets a job as a saloon whore. All rather unsavory. Steve liked the word “filth” though because that’s what Jane Russell has to say to describe Waco. A bit harsh.

You see Waco also wants to come to Emporia to renew acquaintance with his old flame Jill (Russell) but she has wed the local clergyman (Corey) so that’s awkward. Still, he seems to get over it quite quickly.

Everyone appears to have a guilty secret. The pastor rode with Quantrill. Waco wasn’t studying law in prison, as he let it be known, but to become a priest. Naturally he doesn’t want this known. Why not? It’s all rather silly. He has one good line: he says to the town elders, “I’m not as bad as people think I am.” Fair enough. Then he adds, “Maybe worse.”

After that it’s just a straight Earpish-tough-lawman-cleans-up-Dodge type picture with a predictable outcome.

There are too many characters and some of it is confusing. Who are all these people? 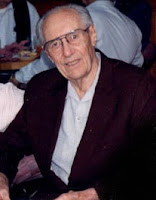 It was directed by good old RG Springsteen (left). Mr Springsteen (I don’t think he’s related to Bruce), Bud as everyone called him, started as a wardrobe assistant at Fox back in the silent days and became a mainstay as B-Western director at Republic in the 1940s and 50s. He subsequently moved to TV and directed wagonloads of episodes of Bonanza, Rawhide, Laramie (which I guess is where he met John Smith), Wagon Train et al. He directed very many feature Westerns, though, from Colorado Pioneers in 1945, a Bill Elliott oater, to Hostile Guns in 1967, a late George Montgomery/Yvonne de Carlo flick. Waco was one of his last.

It starts with an unmistakable Lorne Greene ballad which makes Waco sound very like Ringo. It’s reprised at the end, of course.

It was all shot on the Paramount Western town lot, but in color, and it looks rather low budget. There are about thirty seconds of location shooting of ropin’ ‘n’ brandin’, probably lifted from another movie.

Maybe if this picture had been made a decade earlier, with, say, Anthony Mann or Delmer Daves  at the helm and with, I don’t know, Glenn Ford or Henry Fonda as Waco, and maybe someone really good like Ida Lupino or Nancy Gates in the Russell part – and Bettger as saloon boss, obviously – then it might have been really quite good. As it is, well…

PrevPreviousThe Gal Who Took the West (Universal, 1949)
NextYoung Guns of Texas (Fox, 1962)Next

PrevPreviousThe Gal Who Took the West (Universal, 1949)
NextYoung Guns of Texas (Fox, 1962)Next
Jeff Arnold © 2022 – All rights reserved – Designed by BetterCallChris
Scroll Up