Move over, Dad, it’s our turn

By the early 1960s the Western movie was still alive and people still bought theater tickets to see one but it was definitely showing its age, and TV Westerns were by now all the thing. Studios needed gimmicks to renew the appeal. Color was one way: the first color TVs had been introduced in the US in 1954 but they were expensive. By the start of the next decade, however, sales of color TVs were well up and feature-film Westerns were losing their edge. CinemaScope and variations on the theme were the next way that studios competed with television. It cost more but it offered something that the still small screens at home could not. Other commercial stunts and devices were tried.

Fox had the bright idea of gathering the offspring of some of the big Western stars of the 50s and drawing in the curious that way. Robert Mitchum’s eldest son James, then 22, topped the billing. He looked, talked and walked like his dad (though sadly didn’t have the acting ability).

Alana, Alan Ladd’s nineteen-year-old daughter, came next. She’d had small parts in some of her pa’s movies as a girl but wasn’t really destined for the silver screen – this was her last picture. 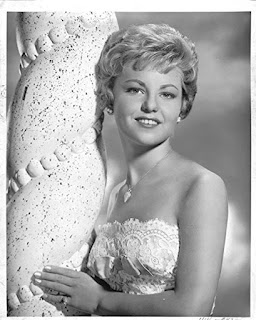 Westerns weren’t quite her thing

And Jody McCrea, 28, son of Joel McCrea and Frances Dee, tall and handsome like his father but once again without, perhaps, quite the same charisma, was recruited too. He also had appeared in some of dad’s movies, quite a few in fact, and was Pa’s deputy in Wichita Town on NBC from September 1959 until April 1960. In 1967 and ’70 he would lead in two Westerns, Sam and Cry Blood, Apache, co-producing the latter. 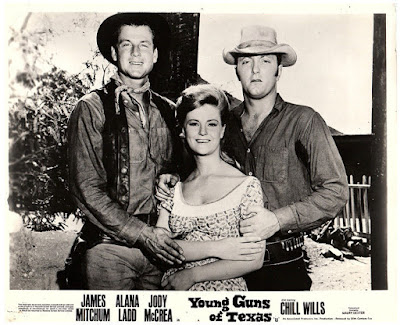 Lastly, a sort of honorary son: Gary Conway’s mentor and father-figure was Gene Barry. The following year Conway would be Detective Tim Tilson to Barry’s Amos Burke, often getting to ride in the captain’s Rolls Royce Silver Cloud, in Burke’s Law. Conway did a few Western TV shows but this was his only feature in the genre.

I don’t think anyone would accuse Chill Wills in 1962 of being a young gun. He was 60. But I guess they needed some weight. He plays a self-ordained preacher, Jody’s father, a bit of a reprobate in his youth (in fact we are told that some annoyed husbands hanged him and though he was cut down he ever after had a crooked neck, Judge Roy Bean-like). Now he is nervous around ruthless rich rancher Jesse Glendenning but shows he still has the tough stuff in him when the going gets rough – as it inevitably does.

Rancher Glendenning is played by Robert Lowery, another experienced Western hand. He had been in John Ford’s Drums along the Mohawk in 1939 and would later be entertaining as the political hack governor to whose character John Wayne waspishly gave the name Humphrey, in the otherwise largely unfunny and poorly directed (but commercially successful) McLintock.  Lowery was in a great number of low-budget and TV Westerns and did actually lead in Universal’s 1944 serial Mystery of the Riverboat and then some Western features.

This Glendenning has a daughter, natch (Alana) who has fallen for Jim Mitchum but daddy disapproves because the boy was raised by the Comanche and no daughter of his was going to marry any damn Indian. Alana and Jim have other ideas and indeed, the Reverend Chill is on hand to conduct a horseback ceremony. Nevertheless, Mr Glendenning raises a posse of his gunsel ranch hands and sets off in pursuit, quite spoiling the honeymoon. 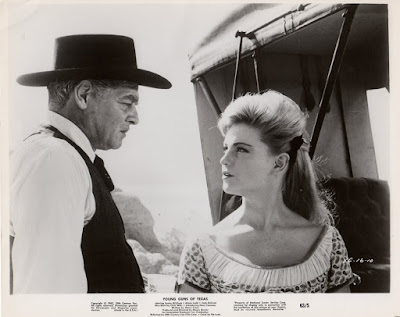 Dad doesn’t approve of her intended

There’s a subplot of Gary Conway’s character searching for an Army patrol. We learn that his brother is commanding it. To West Pointer Gary’s undying shame this brother (whom we never meet, only his corpse) was a Northerner who “forgot what side he was on” and disappeared down to the Confederacy and his Atlanta belle with 30,000 Yankee dollars. Gary wants it back.

It’s nicely shot in Old Tucson and surroundings in good color, so it’s easy on the Western eye. There’s Paul Sawtell music too, some of it cleverly tailored to the scenes (e.g. variations on the theme of Mendelssohn’s wedding march when Jim kisses Alana).

Calamity Jane appears, as Martha Jane Canary, pronounced like the yellow bird. She is appropriately feisty and a crack shot. Not quite sure what she was doing down on the Texas/Mexico border just after the Civil War (when she would have been 13 or 14) but never mind. She is played by Barbara Mansell, not, I fear, the greatest of all the actresses that have played Martha Jane. 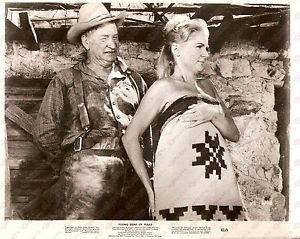 Chill looks approving at Calamity after her bath in a barrel

The Mescalero Apaches play a key role but only in that old-fashioned Western way as extras to be shot down in droves by the heroes. One gets Jody with an arrow in the back but a few minutes later he is seen with just his arm in a sling and is able to ride home so I don’t guess it hurt that much.

Without wishing to give away the ending (spoiler alert because I shall) at one point, when the young elopers are being hard pressed by the ruthless posse led by Alana’s dad, Jim Mitchum says there’s going to be a fight and she’s soon gonna be “either an orphan or a widow”. A bit tough for a new bride. Actually, though, in the last reel she will become both. Oops. 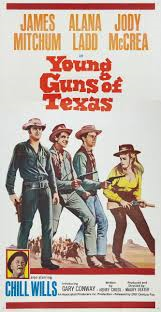 It was produced and directed by Maury Dexter and written by Harry Spalding (as Henry Cross). Mr Dexter started as a teenage actor in Three Stooges pictures and graduated to producing and directing low-budget movies movies for Robert Lippert. He was interviewed about Young Guns of Texas in Wild Wild Westerners by Tom Weaver (Bear Manor, 2012), if you’re interested. Spalding also worked for Lippert. He said he used the name Henry Cross because “I wrote 18 original scripts in three years, and I didn’t want people to start thinking that the only writer in Hollywood was Harry Spalding!”

Young Guns of Texas is uninspired but watchable.