By 1957 Jock Mahoney (left) was a mighty experienced Western hand. He’d started as a stuntman, from 1946, doubling for Charles Starrett a lot, later standing in for all sorts of famous Western actors, and very athletic he remained, but in 1950 he got to lead in a couple of Westerns and in 1951 Gene Autry signed him to star in The Range Rider on TV. I loved that show as a boy and became an ardent Jocko fan instanter (though episodes seen today are a bit clunky, I must admit). In 1954 he led in a couple more big-screen oaters and in 1956 he starred in the splendidly-titled Showdown at Abilene. He was, it must be admitted, a bit on the wooden side in that. Still, by 1957 he was ready to top the billing in two Richard Bartlett-directed Westerns for Universal, Joe Dakota, released in October, and the comedy Slim Carter, released a month later.

Bartlett is perhaps best known for his first Western as director, Two-Gun Lady in 1955, with Peggie Castle as gunslingerette, and for directing episodes of George Montgomery’s Cimarron City, but I also like Edgar Buchanan in his The Silver Star. A Western TV show specialist, Bartlett could nevertheless handle a bigger screen and bigger budget. 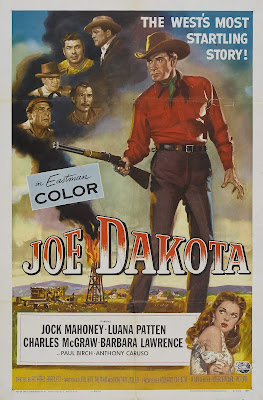 Jocko arrives in the little town of Arborville which he finds deserted except for a rude teenage girl, Jody (Luana Patten, one of the first two contract players for Walt Disney Studios, who would later appear in A Thunder of Drums and Shoot-Out at Big Sag). All the rest of the townsfolk are out at a cabin, drilling an oil well. Wildcatter Cal Moore (tough guy Charles McGraw), says he bought the property from old Indian Joe Dakota, who has gone away. He has got the whole village working on the well. 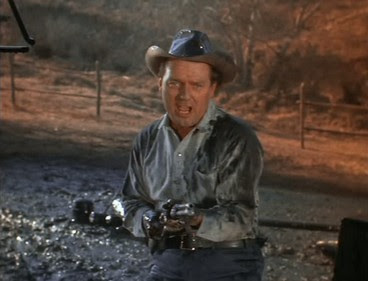 McGraw is the tough-guy bossing the town 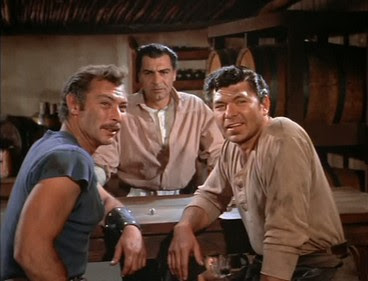 The so-far nameless stranger (Jocko) is the strong, silent type, and he observes with wry, almost amused interest, but the townspeople are hostile, and want him to leave, especially when he starts asking some rather pertinent questions – or, as they think of them, impertinent questions. They seem to have a secret. We are starting to see a Bad Day at Black Rock vibe going on here. Writers Norman Jolley and William Talman, and director Bartlett must have seen that John Sturges film, released two years before. The character of Cal, especially, has something of Bad Day’s Robert Ryan about him. 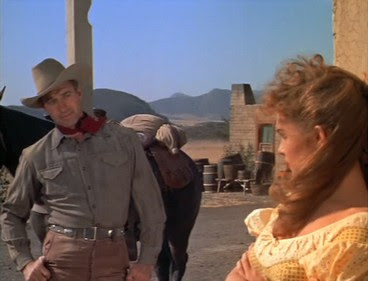 The stranger meets the town’s sultry vamp (aka bolshie teenager)

Only now does the stranger reveal his name: Joe Dakota. But it can’t be – that was the Indian’s name! But you see the Indian Joe adopted his Army captain’s name, the only one he could write, so that he could sign the deed of ownership to his land. The truth behind the old Indian’s disappearance now gradually comes out (my lips are sealed here, though) as Jocko asserts himself and the code of silence of the townsfolk starts to break down.

The Indian who called himself Joe Dakota is glimpsed in flashback and it’s good old Francis McDonald. 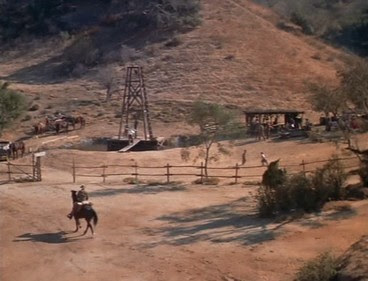 At the crucial moment of dénouement the oil well blows and we get some good scenes of sunlight shining through the gusher. Jocko gets another oil bath. The first time the brothers had pushed him into an oil pool and he had been obliged to bathe in the town horse trough. (It actually took Mahoney two weeks to get entirely clean of the Carbopole used on the set). 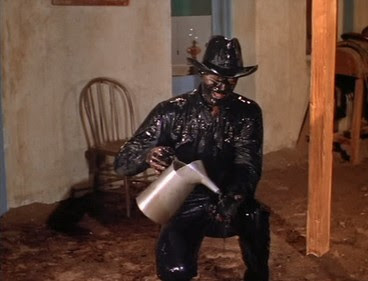 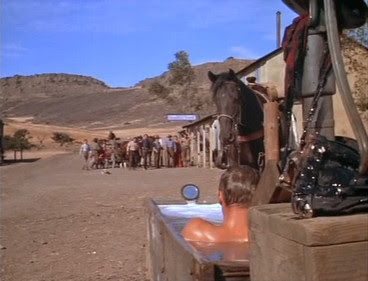 Bath time
.
.
The Conejo Valley locations are arid and bare and nicely shot in Eastman Color by George Robinson, a prolific cinematographer who had started as an actor in 1912 and then spent almost his entire career behind the camera at Universal. Some of the night scenes are especially fine. By day, the isolation and smallness of the town in this desert-like landscape adds to the Bad Day at Black Rock feel. There’s a Sidonis DVD, which means good quality visuals but subtitles you can’t turn off.
.
. 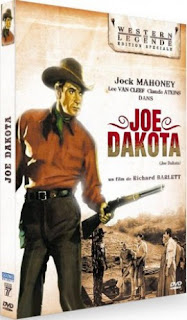 The Joseph Gershenson music is light and melodic, and there is occasional musical accompaniment to visual gags. Not that Joe Dakota is a comedy – it isn’t – but there are here and there definite light touches and amusing incongruities. And Jocko shows off a rather pleasant tenor voice while singing The Flower of San Antone in the makeshift tub.

Director Bartlett told the French cinéaste Bertrand Tavernier, “I am a disciple of Christ, and an artist … I hate sex and violence.” And there is indeed something vaguely parable-like in the story. Caruso’s Marco says that the stranger is the “conscience for the whole town” and Joe Dakota brings redemption to the inhabitants, who repent. There is no sex (though Patten’s character is remarkably sultry and Lolita-esque) and only one gunshot, fired in the air at that. But the moral tale isn’t done preachily or in a heavy-handed way; rather with a light touch.

There’s a slightly pat ending which probably spoiled it a bit. But all in all Joe Dakota is a perfectly reasonable late 50s Western with some excellent character actors, a more than competent lead (it might be Mahoney’s best performance) and quite an interesting screenplay. On balance it’s an underrated and little known picture of some class.

Jocko was pleased with some of the reviews, which, while they may not have been absolutely glowing, still rewarded him for the improvement he had made as an actor. The Hollywood Reporter said , “Mahoney is less laconic than usual and does a good job”. Variety even called him “a relaxed, accomplished actor”. Jock Mahoney? But yes. 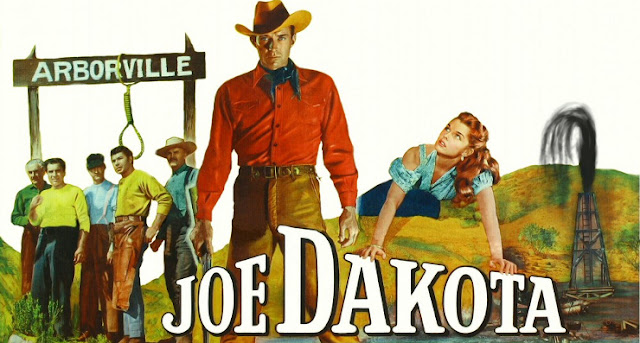