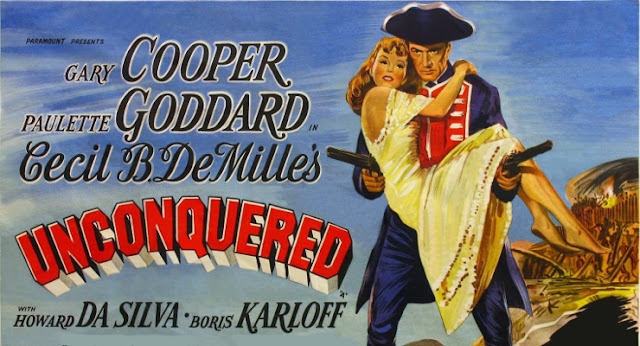 But then, on the other hand, it’s a Gary Cooper picture (actually his last for Paramount, after a twenty-year stint) and if it’s not a Western, at least it is a frontier story. The rather excellent Frontier Partisans site would probably approve. It features dangerous Indians and firearms and saving a fair maiden from perils, and Coop is a man who’s gotta do what a man’s gotta do. So maybe after all it’s Western enough. 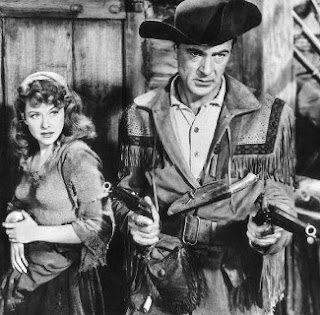 And I heard Peter Bogdanovich on TV last night quoting someone who said Cecil B DeMille was so bad he was almost good. I understand that.

For Coop it came between the forgettable Variety Girl and Good Sam (the latter for RKO) and was his first Western (if Western it be) since Along Came Jones. He wouldn’t go back to the genre till the early 50s and then they would be those frankly stodgy pictures for Warners like Dallas, Distant Drums and Springfield Rifle (early 50s Warners oaters were plodders, I don’t know why). In Unconquered, at 46, Coop was a tad anno domini to be playing a young frontiersman but hey, who am I to talk. Of course he had been a splendid Wild Bill for DeMille in The Plainsman back in 1936 and a Texas Ranger in Canada in DeMille’s North West Mounted Police in 1940, and indeed, Coop was one of the few good things about those pictures, two more turgid-and-bombastic hodge-podges.

Being a DeMille picture, it had few location shots (he hated moving out of Hollywood), though those that there are were expensively exotic – Cook’s Forest, Pennsylvania, Upper New York State and Snake River, Idaho. DeMille loathed location shooting so did the vast majority on huge sound sets in the studio. The alternation of studio and location is clumsy and unconvincing, with much use of back-projection and sound stages so that it looks even worse than MGM Westerns of the period. 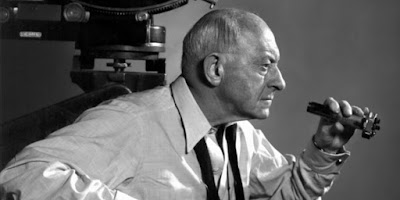 At least I didn’t spot any horses being callously killed, a usual DeMille trademark.

It was written by a large team of scribblers, including studio exec Jesse Lasky Jr. It had a big score by Victor Young. The Technicolor cinematography was by the great Ray Rennahan. Paramount didn’t skimp.

It opens at present-day (i.e. late 40s) Pittsburgh and quickly morphs the shot into 1763 Fort Pitt. A rather self-important manifest-destiny voiceover by DeMille himself tells us about the opportunities and dangers of what lay West of there. The dangers are chiefly Indians, consistently throughout the movie referred to as savages, or occasionally, just for a change, as painted aborigines. Then we move to the Old Bailey in London where Chief Justice C Aubrey Smith condemns Abigail (Paulette Goddard) to “bonded slavery” after being transported to the colonies. Actually, there was the system of bonded servitude, under which people were forced to become servants for a defined period, and they were indeed often treated harshly, but there was not slavery in the sense of African-American agricultural workers sold at auction. So really the premise of the whole film is faulty. Oh well.

On board the Star of London crossing the Atlantic (in the studio, naturally) Abigail, known as Abby, catches the eye of wicked ship-owner Garth (Howard da Silva) who wishes to buy her and orders an auction. An army officer aboard, Captain Christopher Holden (Coop), outbids Garth in a memorable scene, adding “and sixpence” to every bid Garth makes. He doesn’t want the girl – indeed he frees her straight away – but he buys her to annoy Garth, whom he detests. However, once Capt. Holden leaves the docked ship, Garth gets his brutish henchman Bone (the excellent Mike Mazurki) to ignore the freedom and sell the girl again, to Garth. Such wickedness. 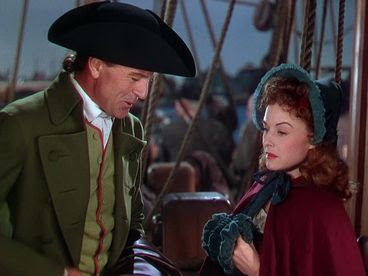 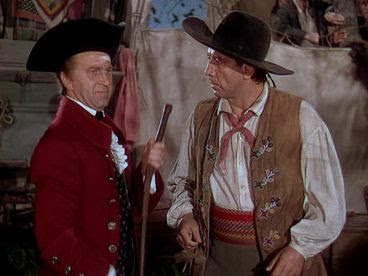 Now, Ms Goddard, a child model who debuted in The Ziegfeld Follies at the age of 13 and was married to a wealthy man before she was 16, went to Hollywood in the 30s and she and Charlie Chaplin became an item – she was a hit in Modern Times. That relationship didn’t last but she got a big contract at Paramount, was one of the actresses screen-tested for the lead role of Scarlett O’Hara in MGM’s Gone With the Wind, and starred for DeMille with Coop in North West Mounted Police and in the non-Western adventure-drama Reap the Wild Wind with Ray Milland and John Wayne in ’42. She and DeMille fell out on the set of Unconquered, however, over her refusal to do a dangerous stunt, and she was dropped by Paramount that year. She was better in Unconquered than she had been in North West Mounted Police, but that wasn’t hard because her part in NWMP was dire: she only had a secondary role in that and also played a silly ‘loose’ woman, spanked by a stage ‘Scotsman’ and forced by DeMille to wear high heels in the forest (feminists would do well to avoid that movie). 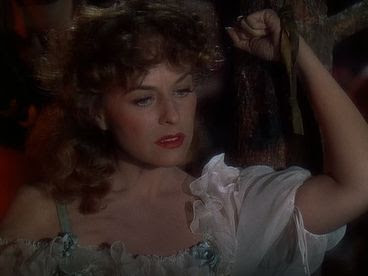 The movie was dubbed The Perils of Paulette on the set

Third-billed Howard da Silva (or Da Silva) was one of those actors whose career was almost ruined by blacklisting but in the mid-1940s he was a big name. He had starred in the Broadway Oklahoma! and in Hollywood he had appeared with Coop in Sergeant York in ’42, but already by the time of Unconquered he was in danger. Robert Taylor ‘named’ him in a 1947 hearing of the HUAC. He is actually rather impressive as the charismatic bad guy Garth. He is a thoroughgoing villain but with saving graces – he seems to have a genuine softness for Abby. 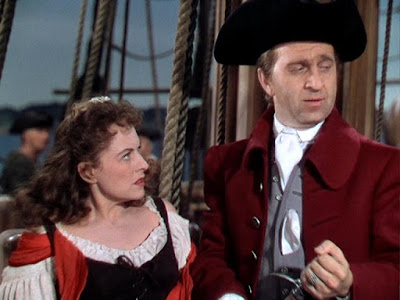 As for Mike Mazurki as Bone, he is splendid. With his 6’ 5” frame and face like granite, he had been unforgettable as the heavy Moose Molloy in Murder, My Sweet in ’44. He actually did quite a few Westerns, such as Relentless, Comanche and Alias Jesse James, and I thought he was great in the otherwise iffy John Wayne oater Dakota. In Unconquered he is Garth’s chief henchmanand excellently thuggish. 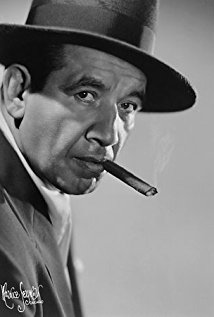 The plot is complex and convoluted but centers around Pontiac’s rising of 1763. Garth is, of course, selling steel tomahawks and new muskets to the Indians – a crime in Westerns that is situated on the scale of wickedness somewhere between cannibalism and matricide. We get appearances from George Washington (Richard Gaines), Mason (George Kirby) and Dixon (Leonard Carey), so plenty of faux-historical detail, though sadly Pontiac himself (Robert Warwick) hardly figures – we just get Boris Karloff as Seneca chief Guyasuta. As a young boy I always thought it was so cool having an Indian named after an automobile. 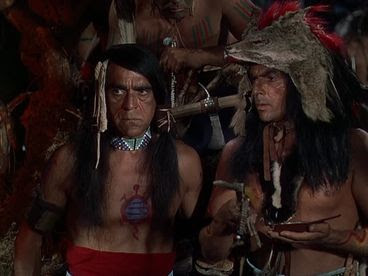 Boris is the Indian chief 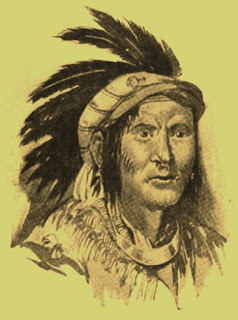 Sadly, Pontiac hardly gets a look-in

About an hour in, Coop is sent on a mission to bring peace to the various tribes, is told “You’ll be playing a lone hand” and changes into buckskins, so at last we get a bit more Western. He finds Abby again, slaving in a tavern, repossesses his property and makes her take a bath (though her bright red lipstick, false eyebrows, etc. seem to survive the scrubbing), taking her to the ball where she stuns the throng and reawakens Garth’s lust. 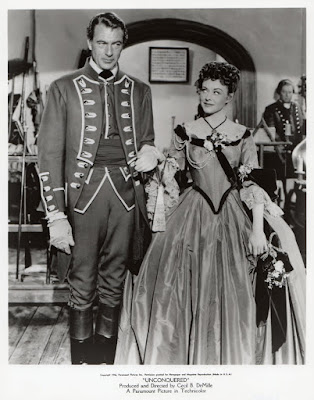 She shall go to the ball

I spotted Lloyd Bridges as a redcoat lieutenant at the dance and indeed there are all sorts of other recognizable faces to be glimpsed among the huge cast, in short speaking roles or bit-parts, such as Francis Ford, Ray Hatton, Iron Eyes Cody, Paul E Burns, Lane Chandler, Jeff Corey, Fred Kohler Jr, Syd Saylor, Ray Teal, and many more. 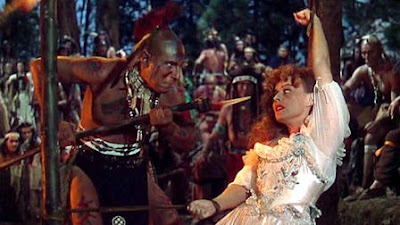 Well, Garth gets Abby back, but the Indians take her and so Coop is obliged to do a daring and bold rescue mission, in which he hoodwinks the stupid savages with a compass. 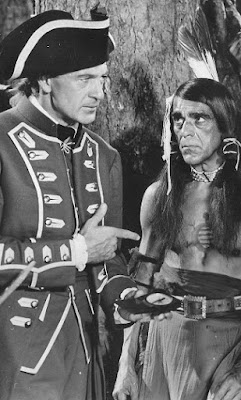 There’s a canoe chase which must have been the model for Bullitt and The French Connection. Coop and Paulette shoot rapids and plunge over a waterfall. All dramatic stuff. And the long film climaxes with an attack on Fort Pitt, with Garth and Bone arguing for surrender, and the goodies, including Ward Bond as the ‘Pitts-burgh’ blacksmith, determined to die horribly rather than hoist the white flag (wisely, actually, because the wicked plot is to slaughter them anyway). The Indians attack, using their canoes as scaling ladders and hurling fireballs from wooden catapults. Garth’s spurned Indian wife (played by Katherine DeMille, the director’s adopted daughter) gets Coop safely away so that he may seek help, sacrificing her own life. And there’s the old-chestnut ending of propping up the dead bodies of killed soldiers to convince the attackers that a large relief force was coming in (Coop had already played this trick in Beau Geste eight years before). The siege lifted, Garth almost says, “Curses, foiled!” but manages not to (he just looks it) and there’s a last-reel quick-draw showdown in a stable. Coop weds Paulette and asks if they should go East or West. West! 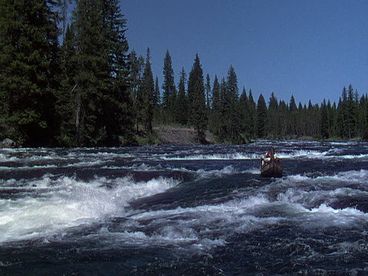 There’s definitely a Drums Along the Mohawk/Allegheny Uprising (both 1939) vibe to the picture, and, as I said earlier, this makes it barely a Western, but there’s enough frontier buckskin-clad derring-do against the Indians to let that pass. John Ford’s  Drums was nevertheless far superior. There’s a plodding direction typical of DeMille and an equally typical kitsch look to the picture, as well as heavy-handed characterization which often crosses the line into racism and male chauvinism. But it’s big, colorful and noisy, and there are enough good actors (especially Coop, of course, but also memorable performances from the likes of Ward Bond and Mike Mazurki) to make it quite an enjoyable, if over-long, movie. It was the last of the five talkie Westerns of DeMille, which was probably just as well. 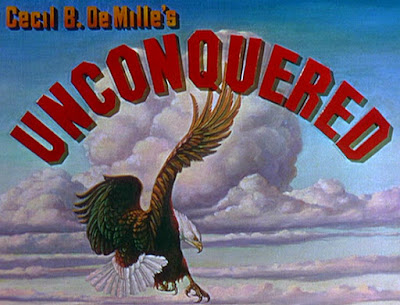