Your own Jeff has recently acquired, thanks to the generosity of a kind nephew, a number of Western annuals for boys from the late 1950s.
.
. 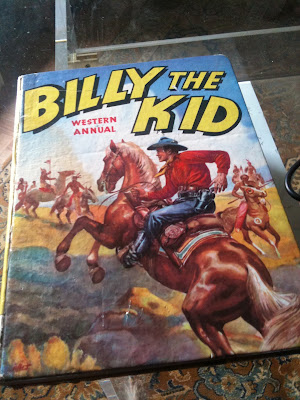 I have just been enthralled by the Billy the Kid one. Interestingly, it’s a British production, dated 1957 and costing six shillings (a tidy sum in them days, I reckon). It announces on the title page “Copyright 1957 by World Distributors (Manchester) Ltd.” and was “Printed and bound by CWS Ltd., Reddish, Stockport”. It shows how into all things Western small British boys were then, just as much as in the US. It’s quite odd, though, to read about Billy with British English spelling and vocabulary, and even the customs are not very American. The boy heroes cook up beans and bacon on the campfire for “tea”.

It has a full-color cover but inside is limited to one color, a rather lurid orange. It alternates strip-cartoon tales about Billy with non-Billy short stories, opening, curiously, with A Man Called Wyatt Earp by a certain Hart Cooper. This story is gripping, telling of two thirteen-year-old boys (naturally there are no girls anywhere to be seen) who save the life of Wyatt Earp in Dodge. Although it does not say so, it must be set in September 1878 because the story centers (or should I say centres) on Clay Allison gunning for Wyatt. 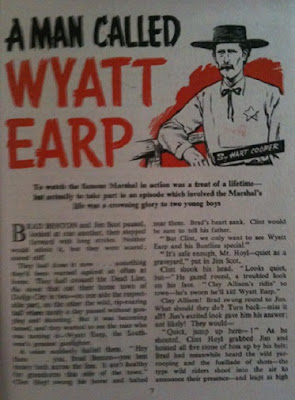 You know the legend, doubtless. Feared and famed gunslinger Allison, countless notches on his gun, comes to Dodge vowing to kill Wyatt Earp, who had arrested one of his cowhands. With enormous courage Earp stands up to the gunman and runs him out of town with his tail between his legs.

The only thing is, it may never have happened. According to contemporaneous accounts, a cattleman named Dick McNulty and Chalk Beeson (owner of the Long Branch Saloon), convinced Allison to surrender his guns. Charlie Siringo, in Dodge as a cowboy at the time, witnessed the incident and left a written account. He said that it was McNulty and Beeson who dealt with it and Earp had not even approached Clay Allison that day.

Whatever the truth of it, the story in the annual gives it the full ‘legend’ treatment. Wyatt Earp is “Marshal of Dodge” and Bat Masterson is his deputy (of course Earp was only assistant marshal and Bat was County Sheriff). Earp confronts Allison in the street with a steely stare, drawing his gun like lightning (so fast the boys do not see it) and Allison blinks and skulks off. Later, the two youths overhear a heinous plot to assassinate Wyatt while he is eating dinner at May Talbot’s restaurant and they race to warn the marshal, earning the lawman’s gratitude and getting to examine his Colt Buntline Special.

It’s a great story for the young readers, who can identify with the boy heroes and thrill to the courage of Wyatt Earp, described as “the Southwest’s greatest gunfighter”. 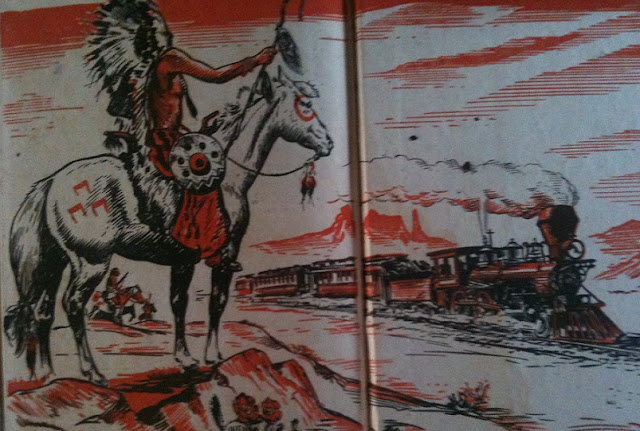 Author of deathless prose Hart Cooper returns in a later short story in the annual which revolves around another great hero of the Wild West, Buffalo Bill (it’s not quite clear what Earp or Cody have to do with Billy the Kid but never mind). We have, obviously, a 12-year-old Bill, another Billy, already showing more pluck and grit than most of the adults around him. He saves the day when hired by the teamster company of Russell, Majors and Waddell The other employees grumble about such an important job going to a mere boy, and one hand in particular, Pinder, hates the lad and plans an “accident”. Eventually, though, young Billy Cody is so very plucky, bringing help when they are surrounded by Indians, that Pinder has grudgingly to admit that the young man will do, after all.

I also enjoyed the tale Texas Vengeance by JL Morrissey. There are only fictional characters in this one but the hero (you guessed it, a plucky lad, and yes, he’s named Billy, though he’s not Billy the Kid) gets his palomino Pal back after his daddy lost it playing cards with a crooked dealer. Pal is one of those Triggerish horses that intelligently goes for help and so forth. The story ends admirably with the cardsharper shot dead, his accomplices tarred and feathered and run out of town on rails and all property restored to Billy and his pa.

The stories are all very well but of course they don’t feature Billy the Kid, and he is after all the titular hero of the annual, so you have to read the comic strip chapters for that. In the first one Billy solves The Mystery of Black Canyon up in Nebraska, and in the second one he is down in the Everglades and his foes are Seminole Indians. This Billy the Kid sure got about. He was back in the Southwest, though, for a ranching story, The Devil Buys Cattle, set in Arizona. In all of the yarns he works out who the crooks are and what their scam is, and then defeats their skullduggery.

The last comic-strip story, though, is not a Billy one but features instead the Durango Kid. You know, I am sure, that Charles Starrett starred as Durango in 1940, returned in ’45 and then appeared frequently in the part right through to 1952. So he would certainly have been familiar to annual-readers in the mid-50s.

In this story, the intro tells us:

THE FLAILING FISTS OF THE DURANGO KID HAVE BEAT THEIR GRIM TATTOO ON MANY EVIL JAWS BEFORE! BUT THIS TIME DURANGO’S MATCHED AGAINST 350 POUNDS OF TOWERING TYRANT! THIS TIME HE’S TRYING TO DEFEAT THE BIGGEST BADHAT OF THEM ALL!

The heroes of these annuals, such as young Buffalo Bill, the Durango Kid and Billy the Kid, make, because of their youth, ideal subject matter for the stories. The very soubriquet “kid” made Charles Starrett and William Bonney (let’s call him that for convenience’s sake) candidates for youth interest. Of course in popular myth (including annuals) Billy the Kid is not the homicidal juvenile delinquent of history but a do-gooder who wanders the West besting villains and bringing justice to the poor and needy.

It’s no wonder these annuals sold, especially around Christmas time. My volume is inscribed “To Roger, from Mum and Dad”. I wonder who that late-50s English Roger was. He’d be in his 70s now. Bonney became a hero instantly after his death (though many stories and movies insisted that he didn’t die at Fort Sumner at the hands of Pat Garrett at all). He was perfect for the Western, first appearing (that I know of) played by Franklyn Farnum in the 1925 silent movie Billy the Kid. Then Johnny Mack Brown was a talkie Billy in 1930, and it went on from there. Roy Rogers, Bob Steele and Robert Taylor were Billy, followed by a long, long list of actors in the role. The most recent was Dustin Lane in Billy the Kid: The Beginning last year. The juvenile-market Billy movies were particularly numerous, and popular, and for years the likes of Bob Steele and Buster Crabbe were goody-goody Billy the Kids for millions, though the actors were often far from youthful…

Do leave a comment if you have a favorite annual featuring Western heroes! 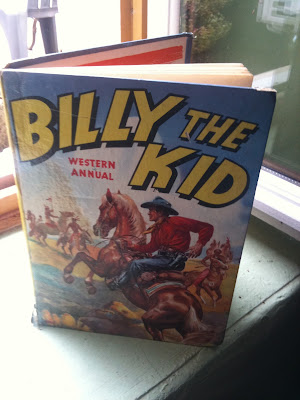 PrevPreviousUnconquered (Paramount, 1947)
NextThe Woman of the Town (UA, 1943)Next

PrevPreviousUnconquered (Paramount, 1947)
NextThe Woman of the Town (UA, 1943)Next
Jeff Arnold © 2022 – All rights reserved – Designed by BetterCallChris
Scroll Up