Poor John Agar. Most actors start with bit parts and walk-ons, gradually working up to starring roles. Agar did the reverse. He started at the top and worked his way inexorably down.
.
. 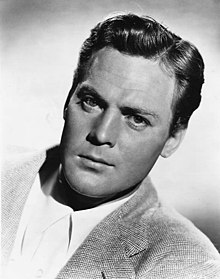 His marriage to Shirley Temple in 1945 led to a contract with David O Selznick and acting lessons. He made his debut under John Ford as Temple’s admirer in Fort Apache in 1948, and returned, this time with Joanne Dru, in the sequel She Wore a Yellow Ribbon in 1949.Though Ford, who could be a horrible bully, made Agar’s life hell on the sets of these movies (sneeringly referring to him always as Mr Temple) the pictures were big hits, financially and critically. John Wayne stuck up for him during filming, trying to protect him from Ford’s worst excesses. Agar also co-starred with Wayne on Sands of Iwo Jima in ’49. 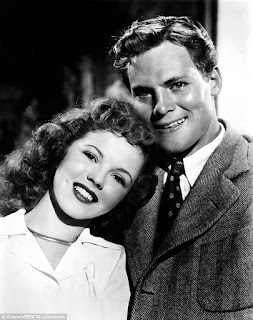 However, it was all downhill from there on. Adventure in Baltimore for RKO in ’49, also with Temple, was a major flop, as was Howard Hughes’s anti-communist drama The Woman on Pier 13 (1950). He was OK in the rather uninspiring minor Western Along the Great Divide, directed by Raoul Walsh in May 1951, in which he was third-billed after Kirk Douglas and Virginia Mayo, but Temple and Agar divorced in December, citing pressures and his drinking, and then there were repeated prosecutions and imprisonments for drunk driving. (He later said, “Heck, I drank no more than John Wayne or Ward Bond … but it got me into a lot more trouble.”)

After that it was cheapie pictures for Sam Katzman, low-budget Westerns for Republic, appearances in TV shows and so on. At the very end of his career Wayne, ever generous and kind, gave him small parts in The Undefeated, Chisum and Big Jake but honestly, some of the late 50s Westerns he did, like Flesh and the Spur, were absolutely dreadful. 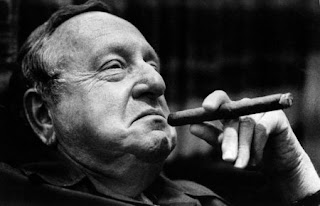 It was an AIP film. You probably know American International Pictures, formed in 1954 by James H Nicholson, former Sales Manager of Realart Pictures, and Samuel Z Arkoff, an entertainment lawyer. Arkoff developed his own formula for AIP’s ultra-cheaply-made second features:

Action (inasmuch as the budget allowed)
Revolution (supposedly novel or controversial themes)
Killing (a modicum of violence)
Oratory (notable dialogue and speeches, though as his writers were not top class and were paid peanuts, this was hard)
Fantasy (acted-out fantasies common to the audience)
Fornication (aka mild but titillating sex and semi-nudity).
AIP pictures did not really aim for the moral or cultural high ground.

Probably the company’s biggest hit was the crime movie The Fast and the Furious with John Ireland, but AIP did quite a few Westerns, often directed by Roger Corman, such as Five Guns West, Apache Woman and Gunslinger. These were so bad they were good, and still make entertaining viewing today, but I’m afraid Flesh and the Spur does not fall into that category. It’s just bad.

Edward L Cahn, the director of Flesh, went right back to the silent days and had been one of Universal’s top editors. As director in the talkie days he churned out cheap and cheerful crime melodramas and comedies. Later on he turned to fashionable teenage rebellion films and schlock science-fiction (with a special penchant for zombies). Whatever earned a buck. He didn’t really do that many Westerns, only twelve (small beer compared with other genres) but he did helm the first and best Law and Order in 1932, even if later oaters were not quite in that class. In fact they were very far from it. 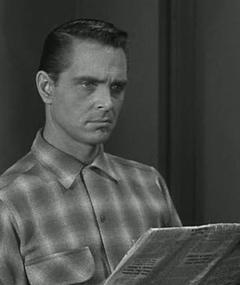 In the opening credits we read that it was made in Pathecolor. The print I saw (it’s on the Westernmania channel of Amazon Prime) was in black and white, and it’s a pretty bad print too. The opening is incredibly old fashioned and looks exactly like a silent movie, as we see the torso (but not the face) of a striped-pajama-clad prisoner escaping, then killing a farmer, Matt Random, to grab his horse and steal his fancy pistol. The farmer is played by Agar, as is the twin brother, Luke Random, who discovers the body and vows revenge. He has the matching handgun. Their daddy gave them each one. Agar overacts and at any moment we expect to see a dialogue card. 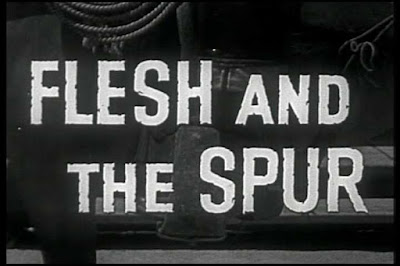 There are many close-ups of boots and legs. You wonder if spaghetti westerns, which were obsessed with such images, were influenced by this movie, though it’s unlikely. How many people would have seen it at all, let alone in Italy?

On his travels hunting down the murderer (he learns that the assassin is a member of the Checker gang) he comes across a girl bathing in a pool, as was standard in Westerns. Just enough flesh is shown to suggest that she is naked but not enough to scare the horses, i.e. the Arkoff formula. 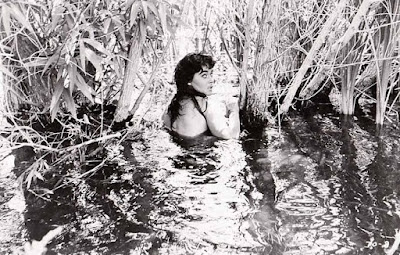 Funny how in the desert there alwys pools to bathe in

She turns out to be Wild Willow, a Havasupai maiden (second-billed Marla English, in her only Western). She is being assaulted by a lout. Our hero naturally intervenes but just before he can use his fancy .38 on the man, a passing gunslinger, Stacy Doggett (Touch Connors, later to be detective Joe Mannix on TV), shoots the fellow, sparing Luke the trouble. They all have a grudge against the Checkers, so they join up. The acting of all three is noticeably wooden and false. The so-called badinage between Luke and Stacy is especially weak. 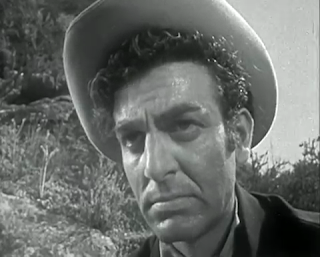 It was fashionable to wear your hat like that

Next they come across a traveling medicine show run by Windy Wagonwheels (Raymond Hatton). Mr Wagonwheels has a glam daughter, obviously, Lola (Joyce Meadow). They join up too. Luckily, Wagonwheels is a crack shot. He delivers the only good line in the whole script: “I warn you, I can shoot the eyes off of a cockroach at two miles. Three, if I happen to be sober.” 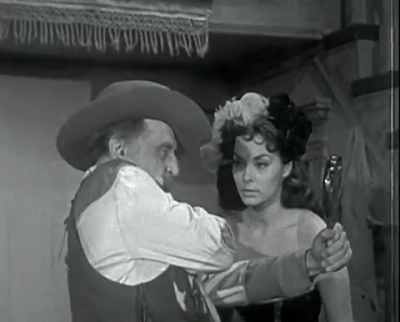 They go to Oklahoma, where they learn the Checkers gang are. There, in a saloon where the patrons have to check their guns, they see Luke’s twin brother’s pistol, on the rack. It belongs to Kale Tanner (Kenne Duncan), leader of the Checkers. There’s a fight with spurs (we’ve had the flesh, now it’s the spur’s turn). This is really the only thing that makes this Western memorable in any way.

There are other fights too, but watching it all I was rather losing the will to live. 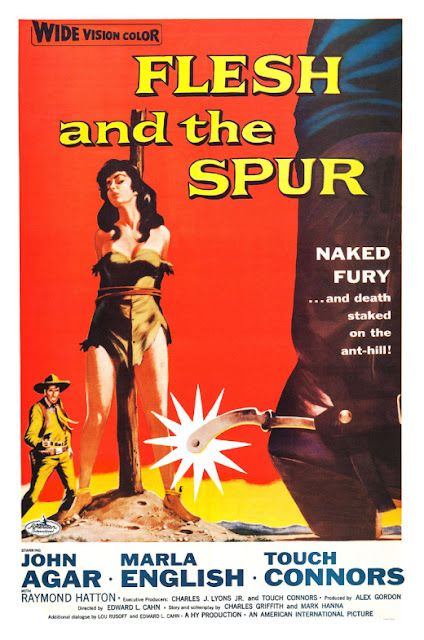 In the actual film she was wearing even less, but you only see her legs

Willow is recaptured by the Havasupai and is stripped (obviously) before being tied to an anthill. Apparently, the movie had been pre-sold on the basis of Albert Kallis’s poster (above) of leading lady English tied to the anthill though there was no such scene in the initial script – the scene had to be added. There are remarkably few ants. Producer Alex Gordon dropped them on the bound heroine. The little critters, however, would promptly run away from her. After numerous failed attempts, Marla English asked, “Look, you’ve got six ants there, isn’t that enough?”

There’s a final shoot-out in the rocks, which was kinda de rigueur, and the i/d of Luke’s brother’s assassin is finally revealed. 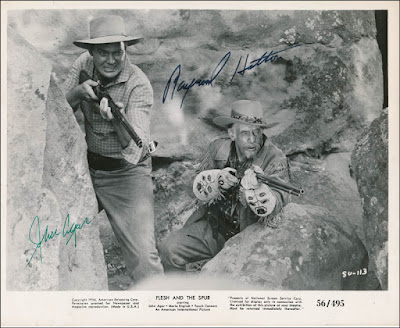 Publicity still signed by Agar and Hatton. You’d think they would have kept it quiet.

Really, this Western was so bad that it was a struggle to get to the end.