The Desperadoes, not to be confused with The Desperados (a trashy Henry Levin-directed movie starring Vince Edwards, from the same studio in 1969) is a Western I am rather fond of. Or, if you are a traditionalist in matters of grammar and style, of which I am rather fond. It is light, entertaining and interesting in a number of ways.
.
. 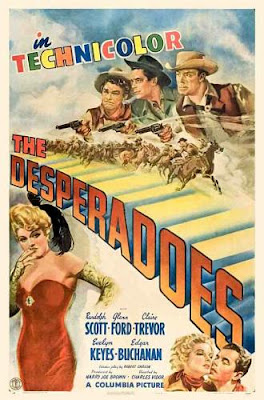 For one thing, it was not only Columbia’s first Western in color, it was the studio’s first color feature tout court. Supremo Harry Cohn, a renowned cheapskate, actually threw budget at it, mirabile dictu. 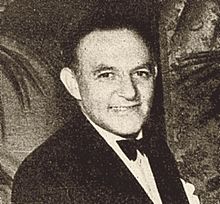 Harry coughed up for once

It was shot by George Meehan, who had been DP on Texas for Columbia two years before and was a regular cinematographer on Charles Starrett and Bill Elliott second features. He did a good job on The Desperadoes, making the most of the Corriganville and Kanab, Utah locations. Costume designers helped with vivid colors. And there is a rich color opening with ‘book credits’ in a plush background. 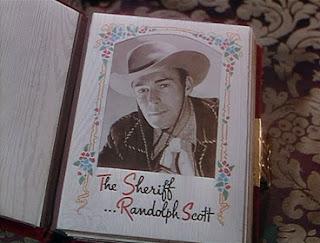 Very nice opening credits
.
.
For another thing, it was a Randolph Scott oater and that can’t ever be bad. In fact Budd Boetticher was an assistant director on the picture and it was on the set of this movie that he met Scott and the movie’s producer Harry Joe Brown for the first time. Of course the three would team up in the following decade for the perfectly splendid series of Westerns shot up at Lone Pine, the best of them for Columbia again. 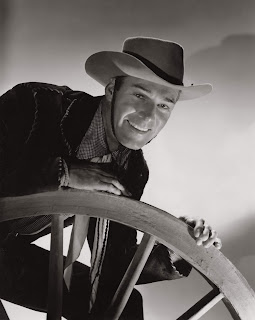 Rather a cheesy studio still, but it’s Randy

With Scott we had second-billed Claire Trevor in a key part. Trevor had actually debuted in Westerns, Life in the Raw and The Last Trail in 1933, both with George O’Brien, but had then become a bit typecast playing gun molls and hard-case women of the world. She really made her name, certainly as far as Westernistas are concerned, playing the shady lady Dallas for John Ford in Stagecoah in 1939, opposite John Wayne, and she returned with Wayne in November of that year, in RKO’s Allegheny Uprising, also known as The First Rebel, and yet again with Dukein Republic’s mega-picture Dark Comman the following year. In ’41 she would appear in Texas. So she was a pretty top star in our noble genre by ’43. 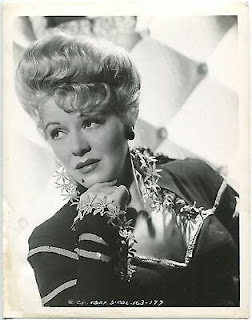 La Trevor out West again. I think she’s trying for a Marlene’s ‘Frenchie’ vibe in Destry.

Cohn had a rep for not ‘doing’ contract players. He usually used big names on loan from other studios. But he had just begun toying with the idea, and had hired young hopefuls William Holden and Glenn Ford (they were together for the first time in Texas and became close friends). And now Ford was cast in The Desperadoes, with a good part too. Glenn would become one of the great Western actors, and when you look at films like Delmer Daves’s Jubal or 3:10 to Yuma in ’57 you realize what a superb talent he was. But at this time he looks like a young kid and was just starting out. He plays the outlaw (but a good badman, of course) Cheyenne Rogers – though he calls himself Smith – who is a pal of Sheriff Steve Upton (Scott) from back in Wyoming but now on the run. He comes to the town of Red Valley, UT to help rob a bank, but is too late. When he finally arrives (having stolen the sheriff’s horse) the bank has already been raided. 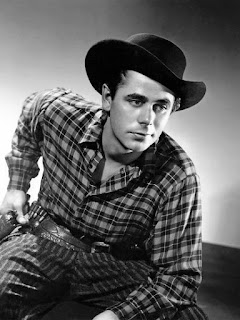 This time, unlike the situation in Texas (when he had to fight Bill Holden for Claire Trevor) he is more interested in the young and luscious Evelyn Keyes (who was the director’s third wife) as Allison, the liveryman’s daughter. Understandably, I’d say, for she wears tight leather riding pants and… Oh, sorry, where was I? 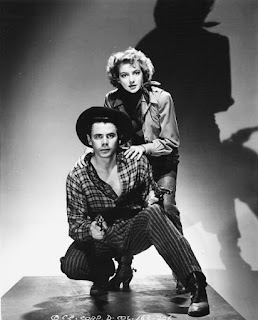 Livery girl and outlaw hit it off

The picture was competently directed by Charles Vidor (only two Westerns, this and The Arizonian in 1935), no relation to King. Charles Vidor (Hungarian-born Vidor Károly) was a regular for Harry Cohn but they had a famously stormy relationship which culminated in court cases and Vidor buying out his contract for $75,000 in order to leave.

Director Vidor (no, not that one)

The movie came out in 1943, during the war. I am not quite sure when it was shot. Perhaps Ford got leave from the US Marines to do it.

It’s a treatment of a Max Brand story, worked up into a screenplay by Robert Carson, who won an Academy Award in 1938 for A Star is Born but who didn’t really do Westerns, though he had contributed to Western Union in 1941 and would later write Advance to the Rear (again starring Glenn Ford). There are some great classic lines, such as the sheriff saying, “There’ll have to be a showdown between you and me” and “If you’re not gone by morning, I’ll have to come lookin’ for you.” Corny? Well, OK, maybe. I prefer to say they are affectionate references that make you smile. 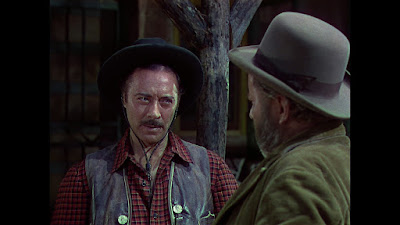 Nedell as boss of the bank robbers is actually rather good. He has a slight Lee Van Cleef look about him.

There’s excellent news still to come: a key role is taken by Edgar Buchanan. You see, there’s a scam going on. The evil banker Clanton (good old Porter Hall) – and we know that the name Clanton is alone enough to mark him out as a baddy – is in cahoots – that’s the only word for it, cahoots – with rascally Uncle Willie McLeod (Buchanan, splendid as ever), Allison’s dad, resplendent in multi-colored vest, who appears a harmless, cheery sort of chap but is actually, as I say, in a conspiracy with slimy banker Clanton. Their scheme is to pay some bank robbers led by Bernard Nedell (who is very good) to raid the bank, but they remove the cash first. They then pay out the poor account holders at 50¢ on the dollar, gaining their gratitude, and pocket the rest. Darned clever. 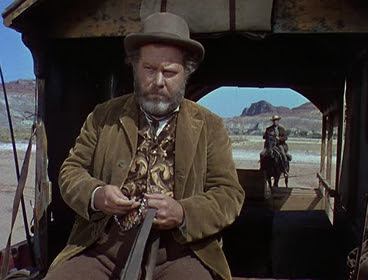 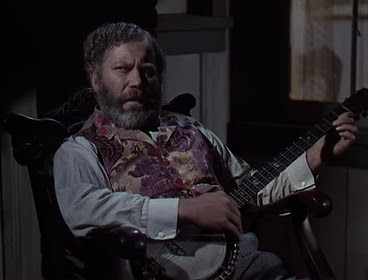 Seizing the opportunity of Cheyenne’s riding into town, they decide to blame him for the robbery, the skunks. But brave Sheriff Randy and also Allison, who is not in on the sting, believe Cheyenne to be innocent…

With the unusually healthy Columbia budget he was allowed, Vidor threw in every known Western device: bank robbery, bar room brawl (quite a classic brawl, actually), dance, stampede, galloping horse chases, a jail break, explosions, and of course a finale shoot-out, in fact the whole nine yards. The saloon, the Bonanza Hotel, owned by the Countess (Trevor) is very grand.

We have a big supporting cast in addition to that rather fancy number (for Cohn) of four principals, including, as well as Buchanan and Hall, Guinn ‘Big Boy’ Williams as Nitro, the explosives expert, Irving Bacon as the barman afraid for his mirror and Hank Bell as poker player, Francis Ford and Glenn Strange the Great. An excellent line-up. 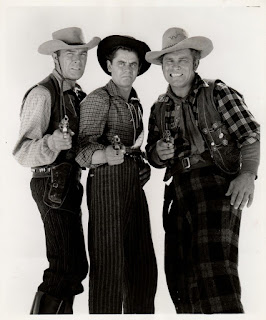 You have to dig Glenn’s striped pants

All in all, no one would claim that this is an epic Western. I mean it’s not John Ford or anything. But it’s big, noisy, fast-paced and huge fun, and the actors, especially Ford and Buchanan, and Randy obviously, are excellent. Bosley Crowther in The New York Times
called it “A straightaway, sock-’em-and-shoot-’em Western—filmed in bright Technicolor, that’s all.” You simply can’t not enjoy it, I promise.

And if they talk about Custer’s last stand in a picture set in 1863, well, who cares? You want history? Read a history book. 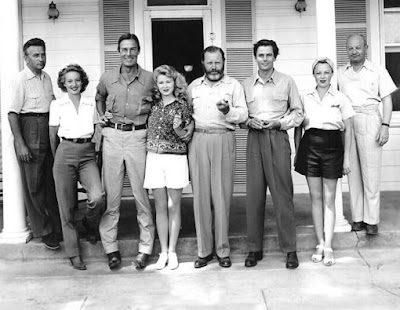 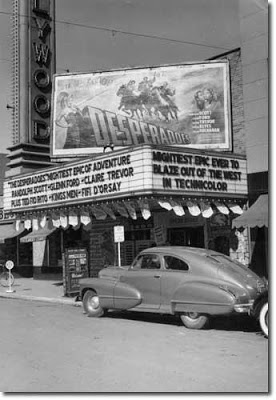