HDNET MOVIES is proud to announce groundbreaking Cherokee actor and activist Wes Studi will host the network’s next movie event “Summer of Westerns” beginning Sunday, May 19, and continuing through Sunday, Aug. 11. The summer features western movies ever Sunday beginning with Studi as ‘Geronimo: An American Legend’ on May 19.

More details and the May schedule are in the press release below along with an image for media use. Please let me know if you have any questions. We greatly appreciate any coverage you can provide. 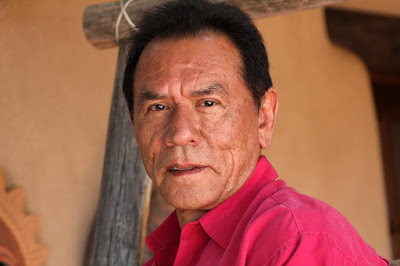 Wes Studi (credit Jen Boyer)
GROUNDBREAKING CHEROKEE ACTOR AND ACTIVIST WES STUDI TO HOST ‘SUMMER OF WESTERNS’ THREE-MONTH MOVIE EVENT ON HDNET MOVIES
The Network Features Western Movies Every Sunday Starting with Studi as ‘Geronimo: An American Legend’ on May 19
Los Angeles (April 11, 2019) – HDNET MOVIES is proud to announce groundbreaking Cherokee actor and activist Wes Studi will host the network’s next movie event “Summer of Westerns” beginning Sunday, May 19, and continuing through Sunday, Aug. 11. Known for his influential role in changing the way Native Americans are cast and portrayed in modern Western films, Studi will guide viewers through three months of Western film favorites every Sunday, sharing his perspective on the films and reflecting on his career as one of the defining actors in the modern Western genre.
The “Summer of Westerns” kicks off with Studi in one of his most celebrated roles as the titular character in 1993’s “Geronimo: An American Legend” on Sunday, May 19 at 4:10pE. The day continues with Gregory Peck in “The Big Country” (1958) at 6:10pE, Sydney Pollack’s “Jeremiah Johnson” (1972) with Robert Redford at 9pE and the star-studded “Villa Rides” (1968) with Yul Brynner, Robert Mitchum and Charles Bronson at 10:55pE.
Memorial Day Weekend features a line-up of gunslingers on Sunday, May 26 starting at 3:05pE with “Invitation to a Gunfighter” (1964) with Yul Brynner and George Segal, followed by Steve McQueen in “Nevada Smith” (1966) at 4:40pE, “Maverick” (1994) with Mel Gibson, Jodie Foster and James Garner at 6:50pE, Clint Eastwood’s “The Outlaw Josey Wales” (1976) at 9pE, and Kevin Costner as “Wyatt Earp” (1994) at 11:20pE.
The full schedule for “Summer of Westerns” is forthcoming.
“The core themes in Western films in many ways are as relevant today as they were back in that time period, which may be a part of why these movies endure,” said Studi. “I look forward to sharing some insights, as well as few fun stories, as we journey through the history of the American West as only Hollywood can tell it.”
“From the memorable characters he has brought to life on screen, to the shift he helped bring to Native American representation in Western film, Wes Studi is the perfect host for our Summer of Westerns,” said HDNET MOVIES General Manager Stephan Shelanski. “This summer, with the valuable insight of one of the genre’s finest stars, we hope to make new movie memories while enjoying some of our favorite Western films of the past.”
From small-town Oklahoma native to internationally acclaimed actor and musician, Wes Studi is known for his powerful character portrayals that forever changed a Hollywood stereotype. Drawing from his rich life experience, Wes Studi moved audiences with unforgettable performances in “Dances with Wolves,” “The Last of the Mohicans,” “Geronimo: An American Legend,” and “Heat,” as well as James Cameron’s “Avatar,” Paul Weitz’s “Being Flynn” and most recently, Scott Cooper’s “Hostiles.”
ABOUT HDNET MOVIES
HDNET MOVIES showcases the best in box office hits, award-winning films and memorable movie marathons, uncut and commercial free. Launched in 2003 by visionary entrepreneur Mark Cuban, the linear TV network and VOD service programs a diverse slate of top Hollywood films in beautiful high definition. HDNET MOVIES is widely distributed by major cable, telco and satellite TV providers in the U.S. For further information, visit www.hdnetmovies.com.
Media Contact:
Sean Grabin           HDNET MOVIES      213-763-2145                sgrabin@axs.tv
PrevPreviousThe Desperadoes (Columbia, 1943)
NextCannon for Cordoba (UA, 1970)Next