Do you remember back last month when I was talking about Wayne Morris in The Marksman? I was aiming also to review his The Fighting Lawman, which was the other Western on the Warner Bros Archive Collection double-feature DVD. But the wretched DVD wouldn’t work, and I contacted the supplier, Rarewaves in the US, about it. Well, I can report that Jessica, at Rarewaves, was really good, and she sent me a replacement right away. Full marks to Rarewaves then. Tragically, however, that disc didn’t work either, so I reckon there must be a fault on the whole pressing. Therefore dear e-pards, I shall not be reviewing this movie any time soon (no point in their sending yet another copy) and my myriad readers will de deprived of the insightful, witty and perspicacious comments I had planned. Both of them will regret this. Hey ho. On then to other matters.
.
. 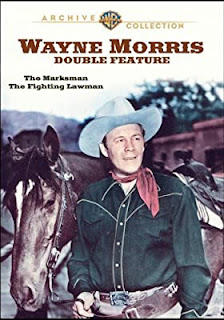 Perhaps Warners ought to consider recalling their faulty product

The Hunting Party. Early 1970s Westerns really were the pits, weren’t they? I think the period was the nadir of our noble genre. Many 1960s Westerns had been pretty ropey, with aging actors appearing in inferior material, but at least the decade finished on a high, with The Wild Bunch and True Grit in 1969. 1970 through ‘75 had no such quality to recommend it. Take the year 1970 as an example: it was the year of A Man Called Horse, A Man Called Sledge, Adios Sabata, Cannon for Cordoba, Cry Blood Apache, Four Rode Out, Rio Lobo, Two Mules for Sister Sara, Fistful of Lead, There Was a Crooked Man, My Name is Trinity, Soldier Blue and His Name was Madron. Not a good Western among them.

Little Big Man was interesting that year but teetered dangerously on the edge of parody. About the best we got was Monte Walsh, The Cheyenne Social Club, Valdez is Coming and Sam Peckinpah’s The Ballad of Cable Hogue.  Chisum from John Wayne was just about acceptable. Those anno domini Western stars again.

1971 wasn’t much better. In fact you could argue it was even worse.

Of course, on the other side of the coin, at least we got big-screen Westerns released in numbers!

The very worst of 1971, though, was The Hunting Party. 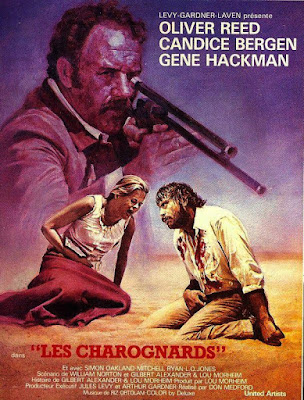 It has the most repulsive start of any Western I know, with two deliberately juxtaposed scenes (deep, man) of the cutting up of a live animal and violent sex. In fact the animal part was excised from the film in some countries as being too disgusting to stomach. But Gene Hackman raping Candice Bergen was left in. Truly repellent.

Hackman has a curious CV as far as Westerns go. He was really great as Little Bill in Clint Eastwood’s Unforgiven – seriously good. He was also OK as General Crook in Geronimo: An American Legend and as Wyatt Earp’s dad in Kevin Costner’s Wyatt Earp (though they were hardly major parts). But Bite the Bullet was so-so, and he overdid it, and talking of overacting, try The Quick and the Dead, admittedly a very bad Western but he certainly didn’t help. Zandy’s Bride? Forget it. And as for The Hunting Party, well… 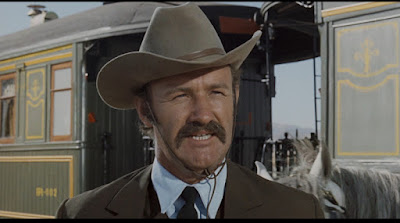 He could be good, bad and ugly

You can’t blame Oliver Reed quite so much. He was a Brit who struggled with the American accent he was obliged to put on. He was quite a hot property after his Bill Sikes in Oliver! and his Gerald Crich in Women in Love in the late 60s. But he was unsuited to Westerns – he tried again in The Great Scout and Cathouse Thursday, with equally unsatisfactory results. He should never have been cast as the ‘hero’ (hah!) of The Hunting Party. 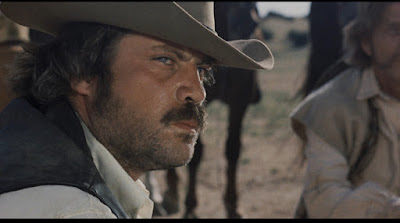 Ms Bergen was coming up in the world at the time and would be nominated for an Oscar at the end of the decade. She did three Westerns, one of them Bite the Bullet, again with Hackman, and also the sordid Soldier Blue the year before The Hunting Party. It was a less than glorious record. 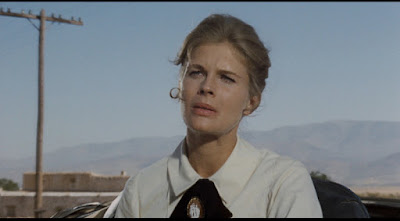 The film was originally announced in 1969 as a project for then husband and wife team Rod Steiger and Claire Bloom. Thank goodness at least that we were spared that.

But actually, even if the cast had been the best actors in the world, the film would still have been trash.

Perhaps we should blame principally the director and writers. Don Medford directed over 75 TV programs between 1951 and 1989, but only helmed three movies, and this was his only Western, though he directed a few Western TV shows. He clearly didn’t understand the genre at all. 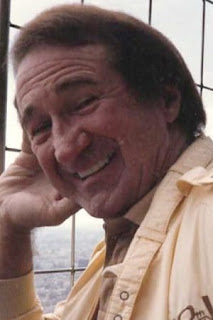 Three writers are credited: Lou Morheim, who was an associate producer on The Magnificent Seven in 1960 (and actually in this one there’s a following rider who makes us think of Chico), but this was the only feature Western screenplay he wrote; Gilbert Ralston, who wrote Willard the same year as The Hunting Party but again scripted no other big-screen oaters; and William W Norton, who wrote or co-wrote three other Westerns, including The Scalphunters and The Man Who Loved Cat Dancing (which has a similar plot to The Hunting Party and is also pretty bad) but was hardly a leading figure in the field. 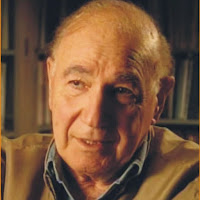 Or the producers, who put such a noxious project together, of whom writer Norheim was one (he is fast shaping up to be one of the principal culprits) and Arthur Gardner, Jules V Levy and Arnold Laven were the others. It’s sometimes talked of as a British film. Though the only Brit actor (Reed) plays an American and it was shot in Spain, I think some of the backers were British, shame on them.

Whoever was to blame, the movie that resulted was pretty despicable. I would certainly never want to see it again.

Gene Hackman plays arrogant cattle baron Brandt Ruger, rich as Croesus – the town is named Ruger, he has his own train and also a trophy wife, Melissa (Bergen), with whom, though, he appears to be impotent. He organizes a hunting party with some cronies, of whom the leading light is Matt Gunn, played by Simon Oakland, a rather good actor who, however, for me will always be Frank Bullitt’s captain. He presents them all with Sharps .54 rifles with telescopic sights, a snip at $700 each and capable of a range of 800 yards. 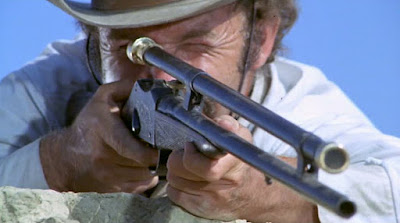 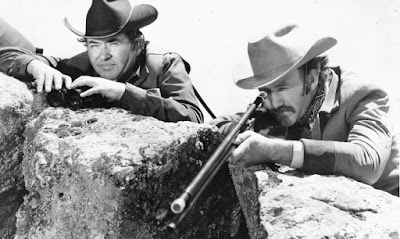 Oakland stands by him

Meanwhile, tough hombre Frank Calder (Reed) rides into town with his gang. LQ Jones is one member, so that’s good. These lowlifes kidnap schoolma’am Melissa and there’s an attempted rape in a wagon (only five minutes in and Melissa has already been assaulted twice). Frank is illiterate and he thinks the schoolteacher will teach him to read. And if we feel that’s enough sexual assaults, forget it. Ruger is busy brutalizing a Chinese sex worker on the train. So far, so repellent. 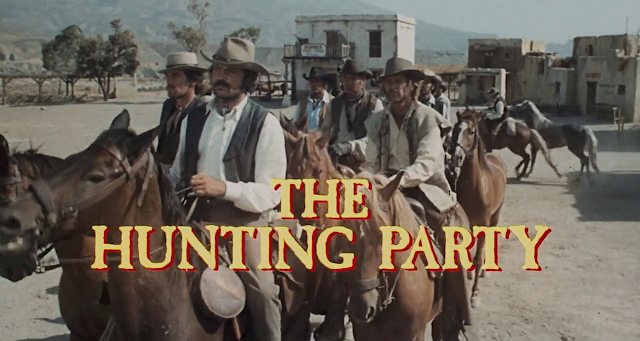 Outlaw Frank rides into town with his gang

Actually, I think the musician, Riz Ortolani, was kind of complicit, in a way, by scoring romantic music played during these appalling attacks.

Melissa goes on hunger strike but in a ‘comic’ scene (which is not the least bit funny) she relents in the face of a jar of peaches. We sense that she is warming to Frank, who, though a white-trash lowlife, is not quite as repulsive as his colleagues and therefore just about human. But hardly.

When Ruger learns of the kidnap he abandons his trip hunting animals in favor of using the long-distance rifles to shoot the kidnappers.

There are many brutal horse-falls and there seems to have been no supervision from any humane society or animal welfare outfit. 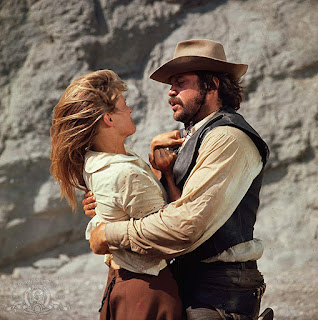 Soon one of Frank’s gang will beat and attempt to rape Melissa again. After all, we haven’t had a rape for at least half an hour at this point.

The gang fall out and start killing each other, and on Ruger’s side all his rich friends except Matt abandon the obsessive pursuit and leave him to it. He’s clearly crazy.

There’s a really ridiculous part where Frank kills his wounded friend, and we move to a frankly moronic ending in which everyone dies. Sorry about the spoiler but I just wish it had happened three reels earlier.