Blazing Across the Pecos (Columbia, 1948)

Durango saves the day – yet again

1948 was an epic year for the Western. But it is easy to forget, in the time of mighty pictures such as John Ford’s Fort Apache, Howard Hawks’s Red River and John Huston’s The Treasure of the Sierra Madre, that there were dozens and dozens of oaters coming to the screen and being hugely enjoyed all over the US and indeed, all over the world.

Westerns were being released all through that year at a rate of about one a week, a level of production we can only dream of now. All the major studios put out pictures in the genre and some of the studios lower down the food chain specialized in them. Some stars did too. Randolph Scott had three released that year, so did John Wayne. But that was nothing compared with the true specialists. Roy Rogers made eight in 1948. And Charles Starrett was the Durango Kid in eight also. When he retired, Starrett held the record for starring in the longest-running string of feature films – 131 titles, half of them being Durango Kid pictures, for Columbia. 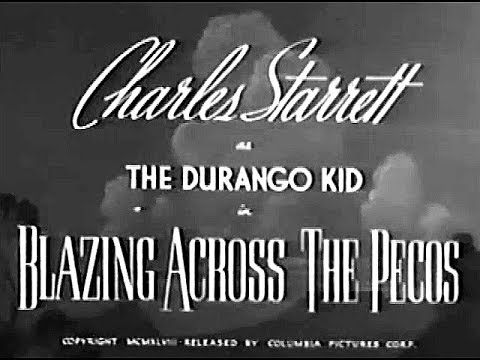 These were examples of the formulaic one-hour black & white oaters resembling one another closely which all the studios were turning out, and they were gobbled up by the regular audiences in those largely pre-TV days, especially the juniors. But they were well made and often admired. Some of the directors may not have been big-name artists like Ford or Hawks but they were professionals, at the top of their game. Take Ray Nazarro, for example. He worked with Starrett on 42 titles, first under director Benjamin Kline, then directing 37 of them himself, between 1945 and 1952. It was a remarkable record. All the pictures had good pace and well-handled action. Yes, they’re pretty unsophisticated by modern standards; there isn’t much subtle about them. But they really are a whole lot of fun – still today.

Blazing Across the Pecos, Starrett’s fifth Durango Kid oater of the year, later re-released with the slightly less Western title of Under Arrest, will do very nicely as an example of the sub-genre.

In the era of the singing cowboy, Starrett didn’t croon a tune. Columbia solved that problem by hiring a Sons of the Pioneers-style country & western group and having a singing sidekick. The Western Stars sing two jaunty songs in Blazing Across the Pecos, namely Goin’ Back to Texas and Honey Baby Mine, and Smiley Burnette gets two numbers, That’s All, Brother, That’s All and Ain’t Much Help. And extremely whistlable the ditties are, too. I think the Western Stars fiddler was a fan of Stéphane Grappelli.

The plot is, well, shall we say, standard. The town is treed by a crooked saloon owner, Ace Brockway (Charles C Wilson) who has got himself elected mayor, and he has a thuggish (and equally stocky) henchman, Buckshot Thomas (Jack Ingram). Wilson only did three Westerns and this was his last. Ingram did an astonishing 216 Western features between 1935 and 1957, almost always as a heavy.

Ace is really wicked because he is providing the Indians with rifles, so that they terrorize local settlers and then he can grab their land cheap. As you know, selling guns to the Indians in B-Westerns is a crime situated on the scale of awfulness somewhere between matricide and cannibalism, and no punishment is too severe for white men who do it.

Ace also, as if that villainy were not enough, incites the Indians to attack the trading posts of decent and farmer-helping merchant Matt Carter (Thomas E Jackson). They’ve already burned down three of the five posts before Durango happens along. Matt Carter has a glam daughter, obviously (they were compulsory in them days) and she is the lovely Lola, played by second-billed Patricia Barry (only this and two other Westerns, I fear).

Decent and friendly Steve Blake, we all know by now, moonlights as the Durango Kid, a masked avenger righting wrongs and bringing bad guys to book. To disprove the white hat/black hat cliché, ultra-goody Durango is decked out all in black, like Hopalong Cassidy, another arch-good guy. He is very athletic too. That’s because all the fancy stunts Durango does were performed by the great Jock Mahoney. Being masked was handy; you could put someone of more or less the same build in Durango’s duds and no one could tell. Except we can. Once you know it’s Jock you can tell. Actually, in this one Jock also gets a bit part: it is he (in plain clothes, of course) who brings to town the news of another Indian attack.

These pictures were made on very tight budgets, filmed on the Columbia Western town lot, and with location footage, such as it is, for example of Indian attacks, often recycled from other movies – you find the print quality of the frames doesn’t match. And they use that speeded-up film technique to make the galloping faster (and with barely a 60-minute runtime, you can’t waste precious seconds). That’s OK, we don’t mind.

Smiley is Marshal Burnette in this one. Mayor Ace has appointed him “for a laugh”. The running gag is that he is cowardly, doing everything possible to avoid keeping law ‘n’ order, leaving all that side of things to Deputy Steve. At one point he hides a gun in a turkey so that Steve can get the drop on the bad guys.

There’s a straight guy, Jim (third-billed Paul Campbell, Aramis in the 1956 TV Three Musketeers), who runs the local paper. You can see him in the turkey picture, third from the left. He’s against the crooked mayor and he has also fallen for the lovely Lola. We might expect Steve to do the romancin’ but he never seems to. Too busy being Durango, I guess. Anyway, Newspaperman Jim, Marshal Smiley, Deputy Steve and Lovely Lola all team up to the thwart the nefarious schemes of Mayor Ace and Henchman Buckshot, who, thus, don’t stand a chance.

Well, well, it’s all most satisfactory. I recommend it. You’ll enjoy this Western. Especially the gun in the turkey. 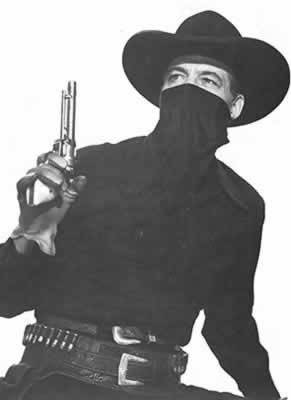