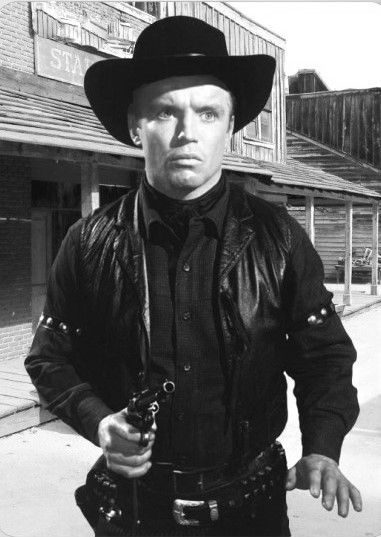 Actually, though he did a great many Western TV shows – 57 episodes of 22 different series – he only appeared in twelve feature films in the genre, not a huge number, and it’s a mark of his ability that he became a leading name in oaters. It’s because he chose some really good pictures, and because he was so memorable in them.

Richard (the name Richard came later; at birth he was given the name R Hanley Jaeckel, with no name attached to the R. Most people called him Jake) started in the movie business at the age of seventeen as a mailboy at Fox.

His first part in a Western was in the marvelous Henry King-directed Gregory Peck picture, Fox’s The Gunfighter, released in May 1950. Jake was Eddie, the first would-be gunslinger kid to challenge Peck’s Jimmy Ringo, and he dies in the first reel. Well, we all have to start somewhere.

Later the same year Jake was Nate in Universal’s Wyoming Mail, one of the gang of train robbers led by Howard da Silva. Jake’s fellow robbers include James Arness and Gene Evans, so it was a very good gang. They also have an excellent lair, a sort of Hole in the Wall affair, though it looks remarkably like Arizona.

There followed a most regrettable feature Western pause. He wouldn’t do another till 1955.

But there were a couple of Western TV shows of note in 1954. One we mentioned the other day, when reviewing The Fastest Gun Alive (click the link for that) because that movie was based on an episode of The United States Steel Hour in which Jaeckel took the Broderick Crawford part of gunslinger Vinnie Harold. I wish he’d been cast for the feature version too; he would have been an improvement on Brod. The other TV show was an episode of Stories of the Century, in which Jim Davis as railroad detective Matt Clark hunted down every known outlaw from the 1850s right through into the twentieth century, all while remaining in his mid-40s. In S1 E2, directed by the great William Witney, Jaeckel was none other than Billy the Kid. And he would follow that with another famous gunman when he was John Wesley Hardin in a pilot episode of the projected series Luke and the Tenderfoot, which was to star Edgar Buchanan, though NBC didn’t take it up. We reviewed that the other day, so click the link to read more.

Bit in 1955 Jaeckel was in another good big-screen Western, The Violent Men, with Glenn Ford, Barbara Stanwyck and Edward G Robinson, directed by Rudolph Maté. Jaeckel is very good as the homicidal young hired gun. His part was marginally bigger than previous ones, so he was (slowly) going up in the world.

And indeed, later that year Jake reached the dizzy heights of second billing in a Bill Williams Western directed for Columbia by good old Fred F Sears. It was Apache Ambush, and as well as Jaeckel there was a stellar Western line-up which included Tex Ritter, Ray Corrigan, James Griffith (as Abe Lincoln) and Ray Teal. Wow. Yes, it was a low-budget black & white but it’s still a lot of fun. Jake is the bitter one-armed soldier Lee Parker who cannot accept that the Confederacy is finished (what the intro text describes as “The unfortunate American Civil War” has just ended). His dad is the sheriff (Forrest Lewis) and his sis, Ann (Adelle August) is in love with Bill Williams. Well, you gotta have some love interest. Anyway, it was a memorable role for Mr Jaeckel.

The late 50s were perhaps the best years of Richard Jaeckel’s Western career. He appeared in two for Delmer Daves, first as outlaw Glenn Ford’s right-hand-man Charlie Prince, sixth-billed in 3:10 to Yuma (1957) and then as cowboy Paul Curtis, seventh-billed in Cowboy (1958). His role in 3:10 isn’t as built up as it was in the 2007 remake, but it’s still a good part. In Cowboy, it’s Jaeckel’s Curtis who causes Strother Martin to be fatally bitten by a rattler during horseplay. Strother doesn’t even get credited, which seems a bit harsh when you’ve been bitten to death by a snake. His character isn’t named in the picture, either, and this underlines the callousness of the cowboys (they are an unpleasant bunch really). Trail boss Ford’s eulogy is less than glowing – in fact it’s heartless. “In the long run I don’t think it would have made any difference.”

Jaeckel’s part in Flaming Star in 1960 was smaller but it was still a good Western, by far Elvis’s best, directed by Don Siegel, maybe even his best too, with something interesting to say on the subject of racism.

Warners’ 4 for Texas in 1963, though, certainly wasn’t good. In fact it was typical Sinatra one-take trash. Jaeckel appeared well down the cast list and is squandered in a bit part (as was Bob Steele). The picture was directed by Robert Aldrich but he was clearly in thrall to the great Sinatra and couldn’t get a grip on the film at all. It’s meandering drivel.

Jaeckel’s ninth big-screen Western was Town Tamer in 1965. This was one of those so-called ‘geezer westerns’ in which slightly over-the-hill directors and stars tried to revive past glories, with only limited success. Town Tamer was an AC Lyles production helmed by old hand Lesley Selander, and it headlined Dana Andrews. Jake was Deputy Marshal Johnny Honsinger, and with him in the cast were Bruce Cabot, Lon Chaney, Lyle Bettger, Richard Arlen, Barton MacLane, Philip Carey, DeForest Kelley, Don ‘Red’ Barry, and many more Western actors from the good ole days.

Of course by the time the 70s dawned the Western was in something of a crisis. Such ones as were made tended to be revisionist and sensational, with the former goodies now portrayed as sadistic thugs (Custer, Earp, the US Cavalry, etc). But the occasional ‘mainstream’ Western did still appear, notably of course from John Wayne’s production company, and such a one was Chisum (1970). It was a historically ludicrous version of the Lincoln County War (but still we don’t hold that against Westerns). Jake was one of Billy the Kid’s outlaw pals. It’s not a great part, but he’s there. Mostly, though, he was doing Western TV shows.

Ulzana’s Raid (1972), however, was a much bigger affair for Jaeckel. He had quite a big part, fourth billed after Burt Lancaster, Bruce Davison and Jorge Luke, as the grizzled (he could do grizzled by now) old cavalry sergeant who has knocked about the frontier for years and knows Apaches. He is superb in the part of a man who has learned to expunge all pity and softness from his heart where the Apaches are concerned. I love the way he clenches his teeth when given a stupid and dangerous order by the young lieutenant, and then just gets on with it. Actually, I would put this performance up there with 3:10 as his very best.

For his last feature Western Jaeckel was back in Lincoln County, when he played Sheriff Kip McKinney for Sam Peckinpah in Pat Garrett & Billy the Kid in 1973.

Casting was a real forte with Peckinpah. Richard Jaeckel, Katy Jurado, Jason Robards, Jack Elam, Paul Fix, Chill Wills and Slim Pickens all shine. RG Armstrong’s Ollinger must surely be his greatest ever performance. The cast list is a veritable ‘Who’s Who’ of the Western character actor from LQ Jones to Elisha Cook Jr. And Richard Jaeckel was by no means the least. It was a good way to bow out. PrevPreviousBlazing Across the Pecos (Columbia, 1948)
NextUlzana’s Raid (Universal, 1972)Next
Jeff Arnold © 2022 – All rights reserved – Designed by BetterCallChris
Scroll Up