A 1950s James Stewart Western at Universal written by Borden Chase, produced by Aaron Rosenberg, shot by William H Daniels, that tells a tale of two brothers, one good, one bad, and whose cast contains the likes of Jay C Flippen, Dan Duryea, Robert J Wilke and Jack Elam, might portend very well. That was the plot of Winchester’73, after all, those supporting actors and crew had distinguished several other Stewart Westerns, like Bend of the River and The Far Country, and Stewart himself was by now very well established as a tough-guy Western lead, playing a driven, even manic man on a mission in adult Westerns of real quality. So all was set fair for another one. Or was it? 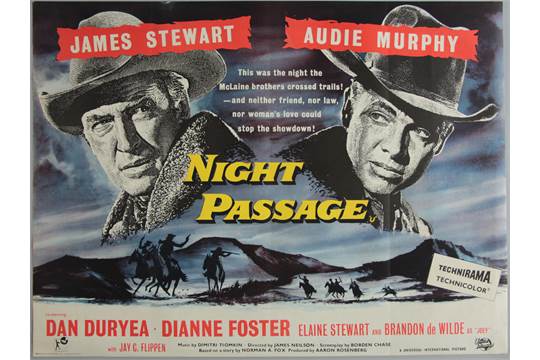 I’m going to take a brief break from our look at Anthony Mann Westerns today (don’t worry; we’ll be back with Mann) to look at Stewart’s next oater after The Man from Laramie. Mann was scheduled to direct Night Passage, and indeed said that he set the project up and even directed a few early scenes, but in the end it was not to be.

Mann’s own version of why not was: “The story was so incoherent that I said the audience wouldn’t understand any of it. But Jimmy was very set on that film. He had to play the accordion and do a bunch of stunts that actors adore. He didn’t care about the script whatever and I abandoned the production. The picture was a total failure and Jimmy has always held it against me.”

It would be good to hear Stewart’s side of the argument but he seems to have remained mum on that. Certainly it was a major falling-out, and the bromance was over. They never made another picture together.

Wikipedia says (so it must be true) that “Mann backed out of the project before production due to other obligations and a disagreement over the casting of Audie Murphy”. Wiki doesn’t give any evidence or source for that but it seems to be a current idea: Brian Garfield too wrote that Mann “begged off because he didn’t think much of Audie Murphy.”

Mann wasn’t quite right about the picture being “a total failure”. Reviews weren’t at all bad. Bosley Crowther in The New York Times was, yes, patronizing about it, but then he usually was about Westerns, and he did praise acting, direction and setting. “They’re robbing the railroad in Night Passage, which came to the Mayfair yesterday, but you can’t say they’re robbing the customers that go for this sort of outdoor film. A lot of the well-worked ingredients of six-gun drama are aptly packed in, along with some beautiful Colorado scenery, in wide-screen and color—plus James Stewart. Actually, it is the presence of Mr. Stewart in the show that gives it a personality above that of the average Western film.” Crowther admired the “back-biting masculine encounters, its gun fights, its trains and scenery” and added, “And James Neilson, who directed from a script by Borden Chase, kept it moving briskly.” So that was pretty positive.

Variety thought it was good too. It called Night Passage a “taut, well-made and sometimes fascinating western” and said, “BO [box office] voltage gives this one a chance of emerging as studio’s top money picture of the year.” It too liked the direction: “James Nielson [sic] has directed with an eye both to mounting story values and colorful performances.”

The picture made $2.6m at the US box office, not at all bad. So no, Anthony, it wasn’t a total failure.

It wasn’t very good, though. Or at least that’s my opinion. The picture does have its admirers. Reader of this blog Bob, for example, wrote me: “I think the reason this film gets a bad rapp is because there is an inherent sweetness to it absent from the Mann pictures. The tenderness between De Wilde and Stewart, or Murphy and Stewart, would never play in a Mann film. That undercurrent of sweetness is just not, sadly, part of the current zeitgeist, and we have no time for it. A shame really, because it is this quality that sets Night Passage apart and makes it special.”

Bob’s right, there is a certain gentleness, even folksy charm, to the tale, and that’s fine, and Stewart’s relationships with the young boy (Brandon De Wilde) and his erred-and-strayed young brother (Audie Murphy) are actually rather touching, but for me it’s just that which lets the picture down. After Westerns of the quality and sheer toughness of Winchester ’73, The Naked Spur and The Man from Laramie, it comes as a disappointment, almost a shock. And it’s legitimate to compare, with the pedigree of the picture making it so obviously the next in the series.

Director Neilson was a TV guy chiefly, producer and director, and this and a 1966 ‘geezer’ Western, Return of the Gunfighter with Robert Taylor, were his only big-screen oaters, though he was responsible for many an episode of TV Westerns. I do agree with the New York Times and Variety, though, that he does keep the pace up, and the story rattles along.

And the picture does look really great. Shot in bright Technicolor by DP Daniels (Winchester ’73 and The Far Country, as well as Cat on a Hot Tin Roof and Harvey) in Colorado, with much use of the Durango/Silverton railroad (a great ride!) it looks really attractive.

As for the music, well, that’s mixed. Some is really nice, such as the lovely Dmitri Tiomkin score that accompanies the train, but Jimmy would play the accordion (he was a keen amateur) and I honestly wish he hadn’t. In fact his playing was replaced by the post-dubbed recording of a professional. But the whole thing is plain hokey. Probably drafted-in Neilson hadn’t got the clout to say him nay.

The plot is a bit of a stretch. Ex-railroad man Grant McLaine is out of a job because earlier he let his brother, the Utica Kid (Audie Murphy) go, and so he makes a living riding from railroad camp to railroad camp playing the accordion for nickels and dimes. Not terribly probable, is it? Now he gets the chance to save his reputation and regain his self-respect by bringing in outlaws (including Utica) and saving the railroad payroll from their nefarious designs. Well, OK.

Unlike Mann (apparently), I’m a bit of an Audie fan. He could actually act really well when given the chance (watch him in John Huston’s The Unforgiven, for example). But it is true that he doesn’t fit here as Jimmy’s evil brother. I mean, Audie, evil? Come on.

De Wilde, the boy Joey from Shane, had grown, four years on, and was 14 and much less whiny. He does a good job on this picture in the ‘plucky lad’ role.

The women are token, frankly. Dianne Foster was Charlie and Elaine Stewart Verna. They are only really along for the ride, and because in those days you had to have a couple of dames in a Western. Actually, reader Paul makes the point that there was always a lack of electricity between Stewart and the ladies in these Westerns. His romance with the tomboy in The Far Country was particularly implausible, and he declined to stay with the home-loving storekeeper at the end of Laramie. In Winchester ’73 there was hardly a love scene at all with Shelley Winters. As she herself said, it was all about “that damned rifle” and the gals didn’t get a look in.

Dennis Schwartz says, “The Colorado scenery was splendid; the acting was fine. The film itself was underwhelming, telling a tale that hardly mattered.”

Night Passage was little more than a star-vehicle, ‘just another’ Western, and wasn’t a patch in quality terms on the foregoing Stewart ones. It’s pleasant enough, especially the photography, setting, music and acting, but that’s about it. Still, you could do a lot worse.