Danger was this man’s specialty

After The Far Country, Anthony Mann and James Stewart again took a Western break, and made Strategic Air Command, released in March 1955, before climbing back in the saddle for what some people regard as the Western high point of their collaboration, The Man from Laramie, released in July. They didn’t know it yet but it would be their last film together. 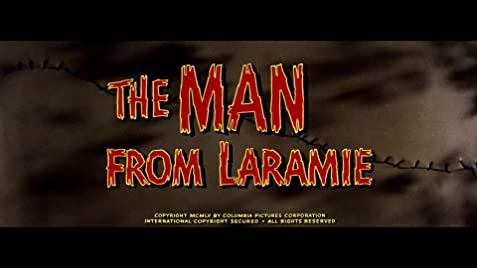 Mann said, “I wanted to recapitulate, somehow, my five years of collaboration with Jimmy Stewart: that work [The Man from Laramie] distilled our relationship. I reprised themes and situations by pushing them to their paroxysm.” Paroxysm, eh? Certainly, the element of almost manic character on the hunt was as strong as ever.

It was done at Columbia, the only Mann/Stewart Western to be made there, and for the first time it was in CinemaScope. Mann would not be the only Western director to use the format to heighten the solitariness of his hero in a vast landscape – we think particularly of Budd Boetticher – but he was one of the first: the process had only been available since 1953 and was still pretty new. Close-ups were also very effective in the format and Mann used that to great effect. The scene on the salt flat was extremely powerful in widescreen.

Perhaps most effective of all was the huge frame containing two opposing characters, and this of course was a Mann specialty. “I always tried to build my films on oppositions of characters. Putting the accent on the common points of two characters and then, making them collide, the story acquires more strength and you obtain a greater intensity.” CinemaScope was ideal for this.

We are back in the world of the complicated and violent family relationship, as we were in The Furies and Winchester ’73. We eventually learn that Will Lockhart (Stewart) is out to avenge his dead brother. Will Lockhart (a very good name) is probably the man from Fort Laramie if truth be told because he’s clearly a soldier, or ex-soldier. Driven, angry, determined, if less manic and borderline-psychotic than in The Naked Spur, he is dynamic and powerful. And more of the classic Western hero.

Stewart as Western hero managed to combine the authenticity and toughness of, say, John Wayne combined with a certain vulnerability which Wayne didn’t have. “Maybe what it is,” declared Stewart, “is that people identify with me, but dream of being John Wayne.” Stewart is stunning in this film. According to Stewart biographer Donald Dewey, Jimmy always regarded Laramie as his best Western and it made him Hollywood’s biggest property of the time. We understand why.

He comes down to New Mexico (the picture was shot around Taos and Santa Fe) with a wagonload of supplies for the local store, really, though, to find the gunrunners responsible for his brother’s death – as you know, selling rifles to the Indians was probably the most heinous crime there was in the world of the Western movie. Lockhart enters the world of Alec Waggoman, a King Lear-like patriarch (Donald Crisp) who, in a way reminiscent of the Luke Short tale Vengeance Valley, has two ‘sons’, a real one, Dave (Alex Nichol), who seems to have little love for his father, and an adopted or pretended one, foreman Vic (Arthur Kennedy, back from Bend of the River), who desperately wants the old man’s love and respect. Old man Waggoman is Learishly going blind, and he is metaphorically blind too, unable to see that his blood kin is no good.

But the old man has dreams, and in these he ‘sees’ that a stranger, “tall and lean”, will kill his son.

Alec Waggoman has a niece, Barbara (Cathy O’Donnell, only this and the Lex Barker The Deerslayer to her Western credit), and she is the pretty storekeeper awaiting those supplies. She hates her Uncle Alec because he cheated her father out of his land. And there’s a matriarchal figure, rancher Kate Canaday (Aline MacMahon, who would return for Mann in Cimarron but didn’t really do Westerns); she loves Alec but he jilted her long ago to marry “a little piece of fluff from the East”.

It’s all very reminiscent of Greek tragedy and is like The Furies in this respect. We just know it ain’t going to end well…

Philip Yordan and Frank Burt created strong characters and good plot from a magazine story by Thomas T Flynn. Yordan wrote or co-wrote top Westerns such as Johnny Guitar, The Bravados, Broken Lance (for which he won an Oscar) and my favorite, Day of the Outlaw. He would return for Mann on The Last Frontier. Burt wrote a lot of Western TV shows but this and a Rod Cameron picture Stage to Tucson were his only feature oaters. Flynn wrote large numbers of stories for the pulps but in 1954 he made his first and only sale to the Saturday Evening Post. The story The Man from Laramie appeared as a serial novel in eight issues in January/February.

The movie is, typically for Mann, beautifully shot, this time by Charles Lang (The Magnificent Seven, Gunfight at the OK Corral, etc), who chose early evening in many scenes to capture that gorgeous New Mexico light and those long shadows. See it on the big screen if you can – and get the advantage of the CinemaScope.

The music (George Duning) is good, too. Even the title song by Lester Lee and Ned Washington, which could have been cheesily warbled by some crooner is understated, and the orchestral score is excellent. Mind, the words of the song are stupid – all that “so many notches on his gun” business. And as for having “a flair for ladies”, he kind of drops Ms O’Donnell flat to ride off into the sunset. Still, I found the song entrancing as a small boy, I remember, and can still sing it, though you probably wouldn’t want me to.

The fight scene where Nichol and Stewart slug it out in the dust, rolling among the cattle, is as violent as anything in The Naked Spur.

The scene where the badmen deliberately hold out Stewart’s hand so that cowardly Alex Nicol can fire a bullet through it, though tame by Wild Bunch standards, was perhaps the most brutal scene in a Western to date, and filling the wide screen in close-up as it does, it has huge impact. It reminds us of a similar and similarly despicable action in Coroner Creek in 1948. Yet Mann cleverly did it without showing the actual gunshot; it was rendered by a sound-effect off and by showing Stewart’s reaction.

There are weaknesses to the film. Unfortunately, unlike in the Universal or MGM pictures where Stewart is usually very well supported, here the other actors are perhaps not quite as strong. Alex Nicol comes dangerously near overacting as the spoilt son, and Donald Crisp as the rancher is plodding (a favorite of John Ford, he never convinced me in Westerns). Even Arthur Kennedy wasn’t so good this time, at least compared with his charming-badman part in Bend of the River. Neither Nichol nor Kennedy is really an ‘anti-Stewart’, as the villains are in the other Mann Westerns. Crisp’s diction is Eastern and he can’t make a Westerner’s ain’t sound convincing at all. It’s a pity because the father-figure is central to the drama and tragedy.

On the other hand Aline MacMahon is powerful as Crisp’s elderly ex-fiancée, and is another strong female character for Mann (women weren’t always that in Mann Westerns). However, Cathy O’Donnell is really only decorative and domestic as the young girl, and rather too posh. Jack Elam is in it, in a curious role, so that’s good. Probably the best supporting actor is Wallace Ford as Charley, Stewart’s grizzled old half-Apache sidekick. I always liked Wallace in Westerns. This time he is more reminiscent of the Millard Mitchell sidekick in Winchester ’73 than the garrulous Walter Brennan one in The Far Country.

Don’t get me wrong: there are no bad actors here, just maybe not quite as strong roles as in some of the other pictures.

The picture did well, grossing $3.3m at the US box office, though not as well as MGM’s Western The Tall Men ($12m) or indeed Mann/Stewart’s own non-Western Strategic Command ($6.5m).

As to the critical reception, Bosley Crowther in The New York Times praised the actors: “Under the fierce and steady direction of veteran Anthony Mann, they are played with authority and vividness.” But being Crowther, he couldn’t resist a downer: “William Goetz has produced the picture in excellent color and CinemaScope, which enlarges the Western vista. This makes up for the things that are obvious and banal, of which there are a number in this stoical Western film.”

Variety said, “Violence gets into the act early and repeats with regularity as Stewart’s trail crosses with a number of warped sadistic characters” and praised the acting: “Stewart goes about his characterization with an easy assurance. Arthur Kennedy, Donald Crisp and Alex Nicol are firstrate in their delineations of the twisted people on the ranch. Distaff characters are done by Cathy O’Donnell, good as the girl who wants to escape the influence of the ranch, and Aline MacMahon, who gives a socko portrayal of a tough old rancher.”

IMDb says that “When the film was released there was criticism that it was much inferior to the novel” but I don’t know what the evidence is for that, nor have I read the book, so I can’t say.

I think of The Man from Laramie as a truly classic example of the Western story of a Shane-style tough stranger who comes out of nowhere, rights wrongs and then rides off into the sunset. Even the title The Man from… is one of the most ‘Western’ ones there is. It is a powerful, gripping Western drama which puts Stewart right up with Cooper, Wayne, Fonda, Lancaster, Eastwood and the others on the Western Mount Olympus, which is probably somewhere up there in the Sangre de Cristo mountains of New Mexico – or maybe in Wyoming. It is arguably the best of all the James Stewart/Anthony Mann Westerns – though I am tempted to say that about each one I review.

Significantly, when Lockhart finally corners the gunrunner (“I came a thousand miles to kill you,” he says), he can’t actually pull the trigger. He lets the Indians do the dirty work. In the last resort, he is the classic Western hero.